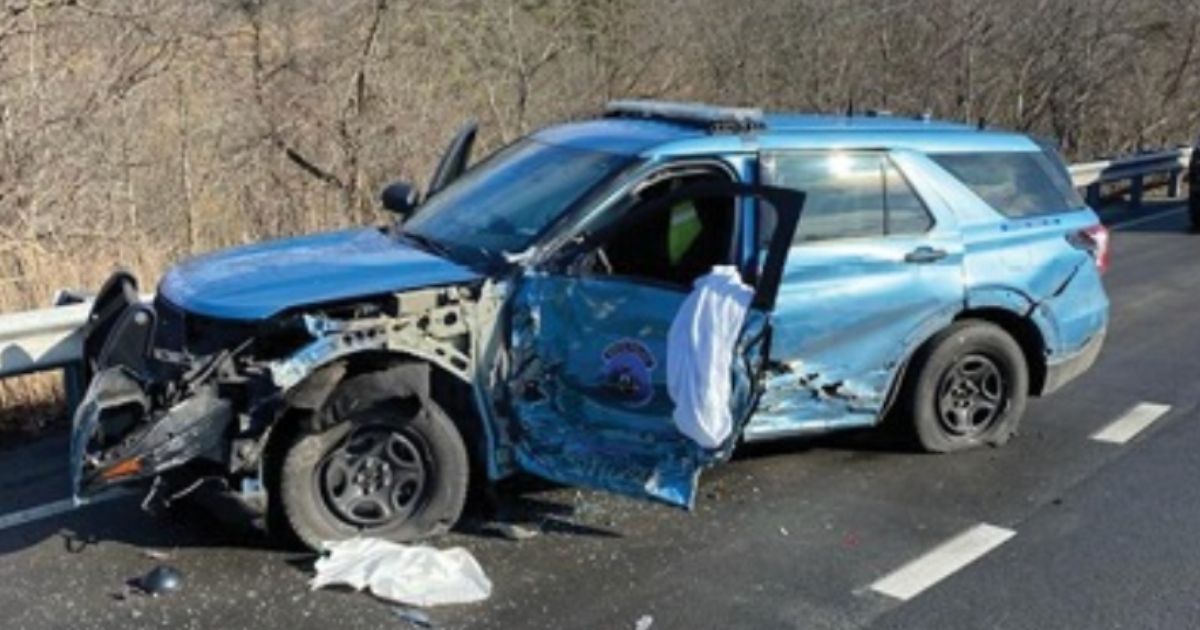 The following article, Family Nearly Dies in Car Crash on Way to Disney, But Police Save the Day: ‘Brings Me To Tears’, was first published on Flag And Cross.

Nikki Mediouni and her family were excited to go on a trip she had planned last October. She, her husband Malek and their two boys — ages 6 and 3 — would be going to Disney World, a vacation they were all very much looking forward to.

Living in Cumberland, Maine, the family set out on the morning of March 16 to catch a flight from the Logan Airport to Florida and their much-anticipated vacation. As they drove along Interstate 95, their plans quickly crumbled.

Maine State Police Trooper Robert Flynn had stopped his car behind a broken-down flat-bed truck in the breakdown lane. He’d turned his lights on and assisted while a tow truck driver worked underneath the truck.

A passing tractor-trailer drifted into the breakdown lane, striking Flynn’s police cruiser and then veering into the left lanes of the interstate, eventually pinning the Mediouni family’s Jeep Cherokee against the concrete barrier.

“My first thought was that people behind us may hit us,” Nikki said, according to The Portsmouth Herald. “Our first thought was, ‘Don’t move, just wait,’ because there’s going to be some aftershock of someone hitting us.”

Thankfully, no one else hit their smoking Jeep. Instead, a passerby who saw what had happened parked nearby, stopped traffic and then asked how he could help.

Malek had climbed out the window, but the good Samaritan helped by opening the hatchback and removing their luggage, so Nikki and the children could escape from the vehicle.

Plenty of help was on the scene by then, and by some miracle, it turned out that no one had been seriously injured. At some point, a detective noticed the family.

“They were sort of stranded on the side of the road, and one of the detectives noticed they had luggage and a baby stroller,” Kittery police Lieutenant John Desjardins told the Herald.

Obviously, the family was shaken up, and the boys were heartbroken that it seemed their trip would be canceled. They’d never get through all this and make it to the airport on time.

But Kittery Police Department Detective Ryan Sanford and Desjardins hatched a plan. They called another Kittery Police detective, Brian Cummer, and approached the family: Cummer could take the family to the airport in Desjardins’ car.

“It was amazing,” Nikki said. “We’ve never had many interactions with police, and I’m so thankful we were able to show my children how great they can be and what they can do for the community. It brings me to tears.”

“They came very close to death, really,” Cummer said. “They were very lucky. The whole thing is, it didn’t ruin everything for them.”

But a ride wasn’t all they got. At the police department, two child-safety seats were installed in the police vehicle, and two brand-new teddy bears were waiting for the boys, too. Cummer even entertained them during the drive by turning on the siren when the boys asked.

“I just broke down in tears,” Nikki said. “It was such a simple gesture that went such a long way for me.”

It was a double miracle that day: The family escaped a serious wreck unscathed, and they still got to go on their vacation.

“Police are telling us, ‘You could’ve died,'” Nikki said. “So they turned a situation that was very frantic and life-altering and could have been such a tragic scenario, they flipped it to such a positive from when I was sitting on the interstate crying and couldn’t breathe.”

“They were shaken up by the accident understandably, but I think they were more than happy to get those boys to Disney as planned,” Desjardins said. “It really was a miracle that nobody was hurt during the accident.”

“It was the right thing to do,” Cummer said. “They were a very nice family.”

Continue reading: Family Nearly Dies in Car Crash on Way to Disney, But Police Save the Day: ‘Brings Me To Tears’ ...