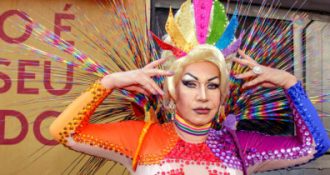 The following article, Seattle Museum Pushes $400 ‘Camps’ to Train Little Boys to be Drag Queens, was first published on .

The West Coast city Museum of Pop Culture (MoPOP) has been caught pushing summer camps to teach little boys how to be glammed up drag queens.

The Seattle-based museum is advertising its cross-dressing, transgender-pushing camps on kids 12 years and younger, according to the Daily Mail.

The summer camp is being led by radical leftist transgender activist and Youtube maker Joshua Hancock. The summer camps are being called the “Art of Drag” camps which will charge $400 per kid.

“Calling all current and future kings and queens! Explore self-expression in MoPOP’s week-long, drag-tastic summer camp!” the description of the camps reads.

The description adds: “Led by Seattle performer Joshua Hancock, you’ll investigate drag history and work together with local artists to create your own personas.”

“You’ll choose your name, explore hair and makeup techniques, and develop your character’s stage presence,” it says. “At the end of the week, celebrate your new drag personas with a private showcase!”

This is what the left is doing, America. They are pushing their dangerous LGBTQ transgenderism on kids.