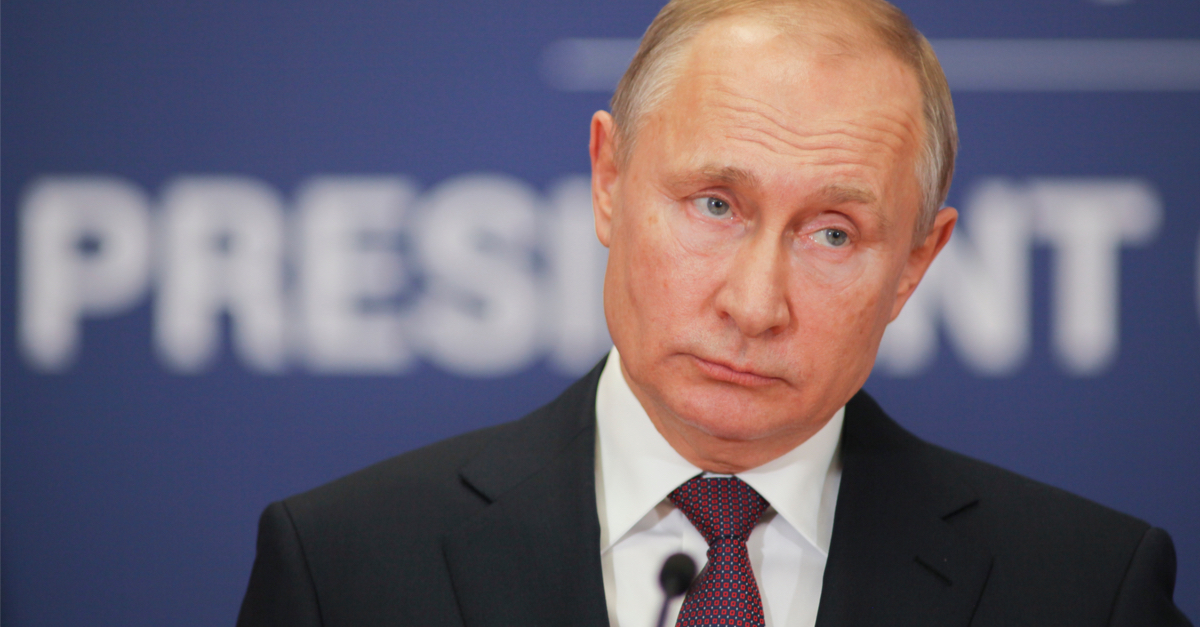 The following article, Putin Signs the Order, Ultimatum to Europe Will See Gas Cut Off if His Demand Isn’t Met, was first published on Flag And Cross.

Russian President Vladimir Putin is about to teach Europe a hard lesson about why energy independence is so critical.

According to Bloomberg, the Russian strongman said in a speech on Thursday that he’ll be cutting off gas supplies to those in “unfriendly” states unless they pay in rubles, Russia’s battered currency.

(It’s worth noting that here at The Western Journal, we’ve been warning against relying on Russian energy for years — even when the establishment media was convinced it wasn’t a problem. In the wake of Russia’s invasion of Ukraine, we’ll continue to advocate for free nations — particularly the U.S. — to pursue energy production plans that don’t entangle them with fickle despotisms. You can help us bring readers the truth by subscribing.)

“To buy Russian gas, they need to open ruble accounts in Russian banks,” Putin said in his speech. “It is from those accounts that gas will be paid for starting April 1. If such payments aren’t made, we will consider this a failure by the client to comply with its obligations.”

Buyers from these “unfriendly” countries would have to open accounts in Russia’s state-controlled Gazprombank, which would convert their foreign currency into rubles, according to an order signed by Putin.

The move is one of the ways Russia is trying to prop up its faltering currency as sanctions over its invasion of Ukraine strangle its economy.

On this account, at the very least, Putin has been mostly successful. As Bank of Russia data show, before the invasion, the ruble was trading at 80 to 1 U.S. dollar. It reached a low of 120 to $1 in March before rebounding to 84 per $1 on March 31.

“Some of the recovery is artificial, made possible by strict limits that the central bank … has placed on currency exchange, withdrawals and hard-currency transfers overseas,” The Washington Post noted.

“But it is also due to a very real factor still working in Russia’s favor: strong oil and gas exports that bring a flood of hard currency into the country.”

Much of that comes from Europe.

European officials have said they would consider Putin’s demand to convert the currency for buying energy into rubles a breach of contract.

“This would constitute a breach to payment rules included in the current contracts,” a senior Polish government source said, according to Reuters. The outlet reported that “Poland has no intention of signing new contracts with [Russian state gas company] Gazprom after their existing deal expires at the end of this year.”

However, Putin made it clear he still considers the contracts binding — he’s just changing the denomination they’re paid in.

“Russia will continue, of course, to supply natural gas in accordance with volumes and prices … fixed in previously concluded contracts,” he said. “The changes will only affect the currency of payment, which will be changed to Russian rubles.”

Given the fact that Putin doesn’t seem too troubled about respecting Ukrainian sovereignty, I doubt he’s going to lose any sleep over violations of contract law.

There are risks to this strategy, of course, particularly that sanctions on Russian energy exports get even tighter. European Union states haven’t specifically sanctioned the Russian energy sector, unlike the U.S. or Britain, so there’s still room for the EU to squeeze Moscow.

However, the bigger risk is for Europe, which now has energy being dangled like a sword of Damocles over its body politic. It’s a situation Putin has spent decades cultivating; now, Europe has to prop up his currency or see its energy prices skyrocket. It may be mafia-style politics, but that’s all Putin understands.

And, instead of cultivating energy independence, Europe let itself be held hostage. Nice work.

Continue reading: Putin Signs the Order, Ultimatum to Europe Will See Gas Cut Off if His Demand Isn’t Met ...