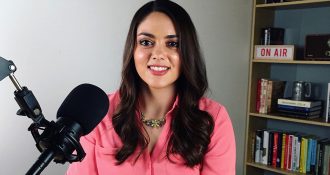 Cumulus Media radio, the national conservative radio network, dumped one of its Washington D.C. hosts after liberals complained that she was a “racist” for attacking Kamala Harris.

Only months ago, conservative activist Amber Athey was hired by D.C.’s WMAL to be one of the cast of the morning show, O’Connor & Company, with lead host Larry O’Connor.

O’Connor is a long-time conservative activist who work for Breitbart News until 2010 when he moved on to become a popular D.C. talk radio host.

Amber was only recently added to O’Connor’s show, but that came to a quick end after she posted a March 1 tweet slamming the vice president in a tweet that some complained was “racist.”

“Kamala looks like a UPS employee — what can brown do for you? Nothing good, apparently,” Athey wrote, referencing the UPS slogan of “Brown,” the color of their trucks and employee uniforms.

Kamala looks like a UPS employee — what can brown do for you? Nothing good, apparently.

But, according to Athey, a few days after her tweet things began to go sideways.

“No one had a problem with the tweet until a few days later, when I spoke critically of protests in favor of ‘trans kids’ at the University of North Texas. A group of maniacal left-wing activists who want to chemically castrate children in the name of “gender affirmation” came after me. All of a sudden, the Kamala tweet was being re-framed as racist and dozens of Twitter accounts were bragging about contacting my employers about my ‘bigotry,'” Athey wrote at the Spectator.

Athey added, “I have written about these dishonest smear campaigns in the past. The people who engage in them do not actually care about stamping out racism, or transphobia, or whatever. They only use those labels because they know they are powerful tools for silencing their opponents.”

Athey went on to add that after working on the radio show on March 9, she was called by Jeff Boden, the vice president of Cumulus Washington, D.C. and told that management viewed her tweet about Harris to be racist. And she was fired out of hand without being given a chance to defend herself.

“Despite multiple appeals, during which company officials admitted that the perception of racism was more important than whether or not my tweet was actually racist, the company has refused to reverse its decision,” she wrote. “Meanwhile, my image and bio is still being used on the WMAL website and social media channels to promote their programming. I am racist enough not to be paid, but not so racist that my likeness cannot be affiliated with the station, apparently.”

Athey went on to blast Cumulus for joining the leftist cancel culture.

She concluded writing, “I am sick and tired of conservatives apologizing to the left, staying quiet because they’re afraid of burning bridges, or complaining incessantly without taking action. We will only defeat the left’s bad faith attempts at censorship if we fight back.”