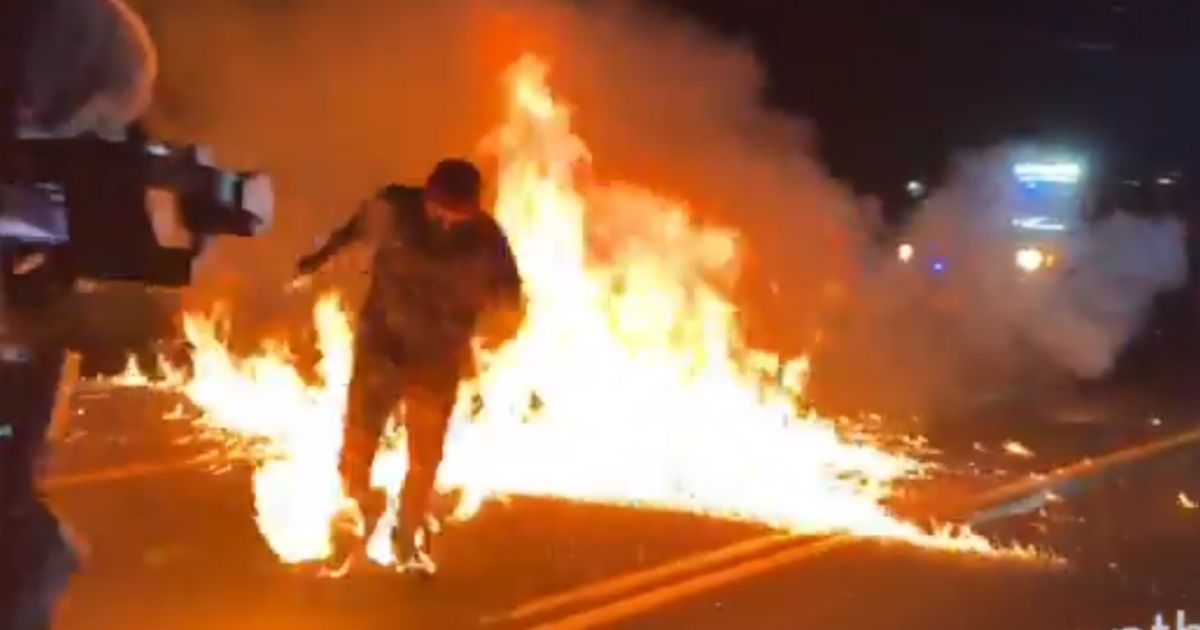 The following article, Worst Rioter of 2020 Busted After Leaving the Price Tag on His Botched Molotov Cocktail, was first published on Flag And Cross.

Was the protest Malik Muhammed engaged in during the 2020 riots in Portland, Oregon fiery? Yes. Was it peaceful? No. And despite the fact his highest-profile victim may have been his fellow protesters, his viral ignominy won’t be the worst punishment he’ll be facing.

On Wednesday, Multnomah County, Oregon, District Attorney Mike Schmidt announced that Muhammed, who infamously set another rioter on fire during the violent 2020 riots in the Pacific Northwest city, will be spending 10 years behind bars after pleading guilty to a spate of charges.

While Muhammed’s missteps were almost comical — in addition to setting his fellow rioters aflame, police were able to track him down due to DNA and a price tag left on one of his unexploded Molotov cocktails — his crimes definitely weren’t.

In fact, the only thing that stopped Muhammed from seriously injuring or killing police officers was likely his own ineptitude.

(He’s also another reminder the wave of protests we saw in the summer of 2020 were hardly as uplifting and justice-focused as the establishment media would like you to believe. Here at The Western Journal, we’ve made sure readers were aware of this from day one. We’ll keep on bringing America the truth no matter how unpopular the establishment makes it. You can help us by becoming a member today.)

According to the Indianapolis Star, federal and local officials worked together to resolve charges Muhammed faced at both levels. Because he pleaded guilty, his sentences will run concurrently.

“In the late summer of 2020, Muhammed traveled to Portland, Oregon with the intent to violently engage in area protests,” the Multnomah County District Attorney said in a Wednesday statement. “His criminal activity spanned September and October of 2020 and included four separate criminal incidents.”

The first came on Sept. 5, 2020, the event during which he set another man’s legs aflame.

During the protest at the East Portland Police Precinct Building, Muhammed passed out baseball bats and threw Molotov cocktails of his own manufacture at police officers.

“One of those devices landed short and caused a fiery explosion which engulfed a fellow protester in flames, causing severe injuries to that person’s legs,” the sheriff’s office said.

An update on this infamous 2020 scene from Portland in which a Molotov cocktail set this protester’s feet on fire:

Tonight, prosecutors say Malik Muhammed is getting 10 years in prison, accused of throwing that Molotov and others at police.pic.twitter.com/hLZgN1jD3y

His actions at that event would lead to charges of assault in the second degree, unlawful manufacture and possession of a destructive device, and rioting.

In a sane world, a chastened Muhammed would have slunk back to Indianapolis, secure in the knowledge this rioting thing simply wasn’t for him. Instead, on Sept. 21, he participated in another protest, this one at the Multnomah County Sheriff’s Office Penumbra Kelly Building.

“That explosive device failed to explode and was recovered as evidence. Police examined the large yellow glass growler and located DNA and a Goodwill sticker on the bottle. This evidence along with an extensive investigation was used to identify Muhammed.”

According to Portland alternative newspaper Willamette Week, police examined store footage from the Goodwill store in the area and witnessed a couple buying both growlers and baseball bats.

That protest yielded charges of second-degree attempted murder and riot.

When another rioter set the building on fire, police tried to get into the area to extinguish it. That’s when Muhammed threw a Molotov cocktail at them, causing “a fiery explosion which narrowly missed multiple officers and caught the clothing of one of the officers on fire.”

Muhammed also faced charges of second-degree attempted murder and riot from that protest.

“The last of the incidents occurred on October 11, 2020, when Muhammed attended a planned protest in the area of Directors Park in downtown Portland,” the media release said.

“During this event, Muhammed used a baton to smash the windows of the Oregon Historical Society, Portland State University, and multiple other businesses in the downtown Portland area.”

The irony of workers union @ILWULocal5 calling my work “sickening,” is that they also represent workers at the Oregon Historical Society. The OHS was severely damaged twice by #antifa at recent riots. pic.twitter.com/Bqzpi6STCd

“During his arrest, Portland Police Officers observed Muhammad attempt to hide a loaded firearm,” the district attorney’s office noted. “Officers recovered the gun upon his arrest.”

Prosecutors had told the court Muhammad, an Army vet, had specifically come to the Pacific Northwest to engage in anti-police mayhem at the city’s riots.

“The defendant traveled to the Portland metro area for the specific purpose of engaging in the multiple criminal episodes and behavior that this case is based on,” wrote senior deputy district attorney Nathan Vasquez in a May 2021 court filing.

“As he has shown time and time again, he will go to extreme lengths to exert his extreme ideology, up to and including building fire bombs and attempting to murder police officers.”

Vasquez hailed the sentence: “There are few things in this world more terrifying than being burnt alive,” he said March 29. “These things tear at the fabric of our community.”

Muhammed’s sentence is by far the strictest one yet handed down to any of Portland’s rioters. That’s likely because the evidence in his case was so overwhelming, thanks — again — to his own ineptitude.

Sadly, he’s likely to be an outlier; a whole summer of destructive riots and rioters have mostly been allowed to slide away from view or legal responsibility for their actions.

If law enforcement thinks this doesn’t have any practical effect, they need only look at Portland. Its police force has been decimated by a mass exodus of officers, an exodus fueled by a city that doesn’t appreciate them and rioters who make officers them targets of their violent wrath. Violent crime is way up.

Whereas once the rallying cry was “defund the police,” city officials had to put back much of that money they withheld from police to deal with both issues.

Perhaps prosecutors will remember that the next time they let rioters run roughshod over a city because it feels politically expedient at the time. Muhammed’s sentence sends a message far too late about what the consequence of the violence begat by the George Floyd riots should have been, not what it was.

Continue reading: Worst Rioter of 2020 Busted After Leaving the Price Tag on His Botched Molotov Cocktail ...

C’mon man! Democrats have labeled the protest as as mostly pieceful…….. and Com-Allah supported bail for the participants, except Kyle Rittenhouse.