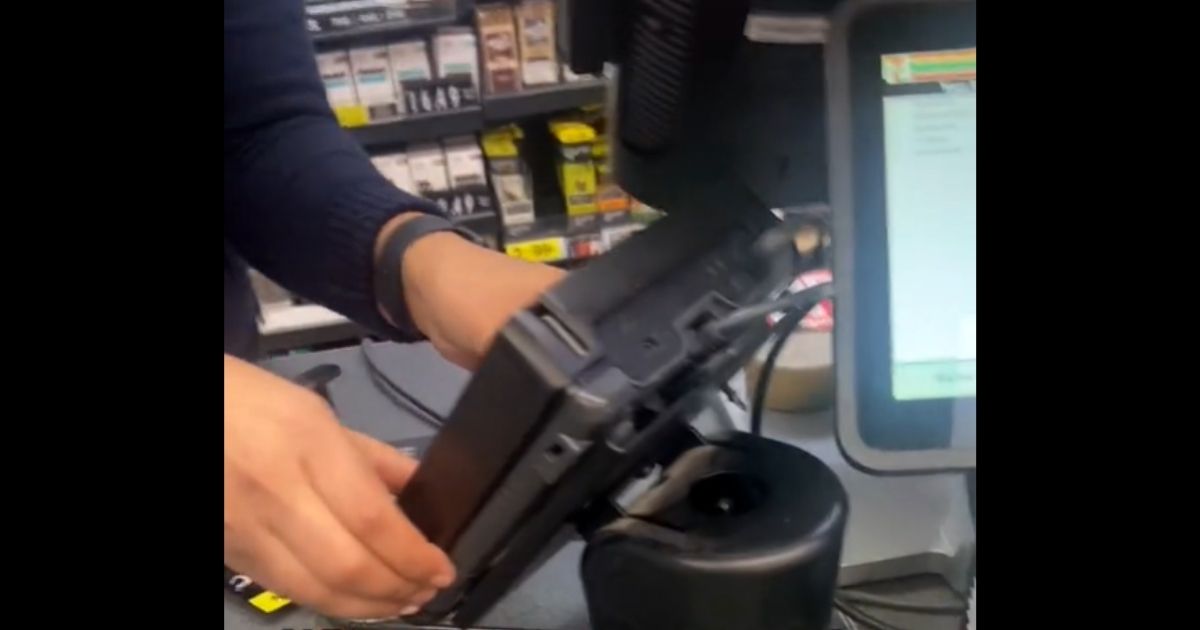 If you’re not paying attention to the credit card reader at your local convenience store, you could be in for a rude awakening. Nyshje Rattler found that out the hard way — but she ended up going viral taking down the fraudsters who ripped her off.

According to KXAS-TV, Rattler became a TikTok sensation when the McKinney, Texas, resident took a video of herself ripping a credit card skimmer off a card reader at a local 7-Eleven after she found out her bank account had been drained.

(Here at The Western Journal, we bring you critical stories that could affect you, including fraud warnings — and we do it all from a Christian, conservative perspective. You can help support our mission by subscribing.)

Rattler told the NBC affiliate that she first discovered something was up when she tried to buy a bag of potato chips at the convenience store last week.

“They said: You don’t have the money. And I said: Excuse me?” Rattler said.

She called her bank and found her account had been “wiped clean.”

So, who had her card information? She traced back the purchases she made and realized she’d made a purchase on March 21 at a 7-Eleven on McKinney’s Medical Center Drive.

Rattler also remembered that the cashier was unusually finicky regarding how she used the credit card reader — and remembered hearing about credit card skimmers in Los Angeles. Skimmers are placed over machines to swipe an individual’s card data, which can then be used to make purchases illegally.

According to KTVT-TV, police said “the skimmer is made up of a replacement cover, likely purchased online by a criminal, outfitted with a computer board that can be accessed wirelessly, and placed on top of the store’s identical credit card reader.”

“He [the cashier] was obsessive about how I placed the pen down so I thought that was weird,” Rattler said. “I kept replaying it in my head.”

In one of her TikTok videos, she also said the cashier directed her to use the machine with the skimmer, which isn’t normally the card reader she uses.

When she went back to the store and looked at the machines, she noted there was a difference between them.

“I compared the two and I noticed that the one I grabbed was bulkier on the side, kind of sticking out. It wasn’t flat like they said. So, I just lifted it up and it came up,” Rattler said.

She posted a video of the moment to TikTok — which has been viewed over 21 million times in its first week.

According to a spokeswoman for the McKinney Police Department, it came up easily thanks to the fact that skimmers like these are only held on by a bit of adhesive.

“You can actually try to jiggle it. Try to pull it,” spokeswoman Carla Marion Reeves said. “There’s some double-sided tape that is used to keep them down, nothing more, so criminals can easily take it.”

Reeves said the skimmer “is being forensically examined right now.”

“I think it’s really smart of her to sit down and really think about where the compromise actually happened,” police Corp. Melissa Taylor told KTVT regarding Rattler.

“These are double-backed, taped on in most cases, so if you try to pull the cover off at the ATM, the keypad or the point that put your credit card in is going to come off,” Taylor said.

Rattler told NBC News that people could tell the difference between a regular card reader and a reader that’s been tampered with through one dead giveaway: looking for a gap.

“The way that you can tell is that the machine should be flat on the side,” she said. “There should be no gaps. So I started comparing the two and the one to the right, it had a gap.”

As for whether it was an inside job, it’s impossible to tell. The McKinney Police Department told KXAS that at least one other potential victim of the card skimmer at that 7-Eleven had come forward. However, the police officer leading the investigation wasn’t available for comment.

Relying on 7-Eleven, however, isn’t ideal — particularly after your bank account has been wiped clean.

Let Nyshje Rattler’s experience be a lesson to all of us: Being hit with a case of credit card fraud could be as close as your next bag of chips.