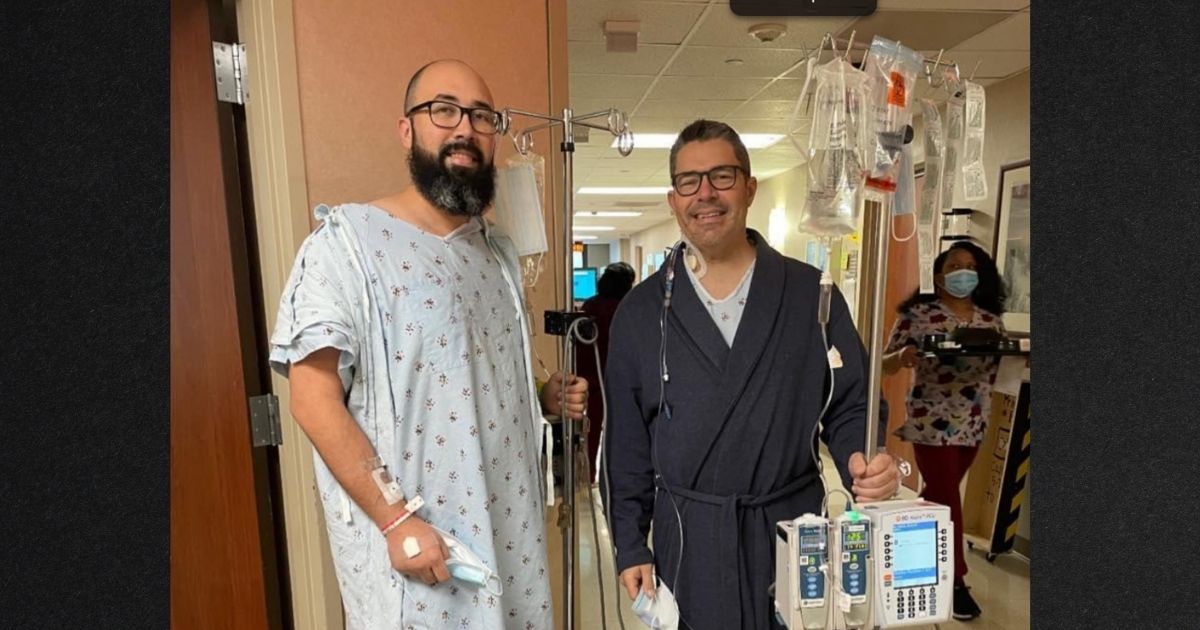 The following article, * ‘A Matter of Life and Death’: Stranger Gives Kidney to Ailing Single Dad, They Become Fast Friends, was first published on Flag And Cross.

In July 2021, a woman came across a moving post online that prompted her to ask her husband a question: Would he be willing to donate a kidney to a total stranger?

After considering it, Chris Perez said, “Sure, why not?” Nearly a year later, he’s short a kidney but has gained a friend.

That post was by 46-year-old Steve Sanders, a single father of two, who was struggling with uromodulin kidney disease, a rare condition that was slowly claiming his kidneys.

Doctors told him his future would necessitate dialysis or a kidney replacement, so about a year and a half ago, Sanders went to work creating a website and posting online to try to find a donor.

A selfless act by a stranger —an Atrium Health employee—saved the life of Steve Sanders. Learn about the kidney transplant that saved Steve’s life and the man who made it happen. https://t.co/StTn385H6v #NationalDonorDay

“Hi, my name is Steve,” Sanders‘ post began. “I’m a single father of 2 amazing kids (10&7) and I am in dire need of a kidney transplant. My insurance will cover ALL of the medical costs.

“While I can’t legally pay you for a kidney, I am more than happy to pay out of my own pocket to reimburse other expenses that medical insurance does not cover. This is literally a matter of life and death so please consider donating and take a moment to share my website with your friends and family.”

Dialysis was not an option for Sanders, who described himself as “extremely active,” loving mountain biking and going to the gym, according to Fox News. He’d known people who had gone through dialysis and remembers well how much it drained them — a sobering thought for the single father.

“I did not want to go on dialysis … as an active father of two young kids,” he said. “If you go on dialysis, it’s really taxing on your body.

“To hear how it has impacted their quality of life, that was frightening for me.”

People started reaching out to Sanders. There were 26 who initially agreed to help, but they all either failed to finish the paperwork or they found out they weren’t a match.

“I don’t fault them for that,” Sanders said. “I completely understand.”

But that was before Perez reached out. He immediately felt for Sanders, as they were both fathers and Perez knew what it would mean to him if he were in Sanders’ shoes.

“It’s really scary to think about,” Perez said. “Here’s this serious health issue that you can’t control and is no fault of your own, yet could severely impact your quality of life and your ability to kind of see your kids grow up and spend time with them and things like that.

“I couldn’t help but really think deeply about if it was me in that situation. I’d really want someone to do it for me.”

Perez went forward with the process, and found that he was a match. Sanders got the news in late 2021.

“It was a total relief,” Sanders said. “I was happy that somebody was willing to give me a chance.”

When the dads first called to chat, they started as strangers, but ended up talking for hours and found that they had a lot of similarities.

“Our sons have the same name, we have a similar background, we studied the same thing in college, we just really hit it off,” Perez said. “[He] was like an old friend.”

In January the surgery was performed, and both men recovered well, with Sanders noticing an immediate improvement. Though Perez is quite literally a part of Sanders’ daily life through his donated kidney, the two still talk constantly and have become good friends.

“My life has been enhanced by knowing him, because he’s just a really great guy and he’s a good friend,” Perez said.

“I got a kidney, but I also got a really great friend out of this,” Sanders agreed.

“I always tell my kids that we need to work really hard to be kind for others and kind toward others,” Perez said. “I really believe that at the end of the day, our kindness and the way we are compassionate toward others — that’s the legacy we leave behind after we’re long gone.”

“Chris has made me feel very comfortable about not owing him anything,” Sanders added. “This is a guy who did this out of love and kindness and a very genuine place. And that felt really good … and really harbored a place for us to become great friends.

“For him to give a piece of himself to extend my life and my quality of life so I can be a good dad is the greatest gift I could ever have and could ever get. And it just shows … what a great person he is.”