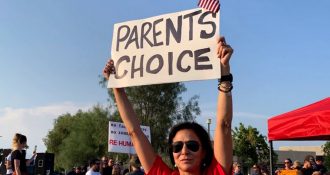 Who should be in charge of what children learn at school—the parents or the state? Florida is poised to pass a parental rights law that is being distorted as anti-gay.

The bottom line is: Is it appropriate for children from kindergarten, through third grade to be introduced to questions of sexual and gender identity? The media says yes. Parents (mostly) say no.

Recently, Jarrett Stepman of the Heritage Foundation addressed this issue in an article for The Daily Signal decrying the legacy media’s distortions of Florida’s bill. He notes, “For the crime of trying to protect young children from sexually explicit material in the classroom, Florida legislators are being crucified by the media.” I interviewed him on the radio on this topic.

The Florida bill is labeled HB 1557. That numerical name is probably the only thing that the two major sides agree on about it.

Because of the advantages of the major media and social media companies, which regularly censor any criticisms of the militant homosexual and transgender movement, people often hear only the one side of this debate.

So the Florida law is falsely presented as some sort of attack on transgenders and homosexuals. But all the law does is bolster parents’ rights in the matter.

The bill’s opening words are: “Parental Rights in Education.” It goes on to say that it aims to “reinforce fundamental right of parents to make decisions regarding upbringing & control of their children.”

The law “prohibits classroom discussion about sexual orientation or gender identity in certain grade levels.” What are those levels? Kindergarten through third grade. In other words, children generally nine years old and younger.

In fact, Gov. Ron DeSantis proclaimed, “The media can’t defend injecting sexual topics like transgenderism into classrooms for kindergarteners, so they concoct false narratives to try to divert attention from this fact in the hopes that people will not read the bill.”

The biggest of those false narratives is the left’s characterization—and the media’s parroting—of it as the “Don’t Say Gay” bill. Most who receive their news from the mainstream media have no idea that the bill (which does not mention the word “gay” or “homosexuality” anywhere in it) merely keeps sexualized topics out of the classrooms of kindergartners through third graders—where few sane people believe those topics belong in the first place.

Controversy surrounding this bill raises many questions. The most important of them is: Who is responsible for the children’s well-being, the parents or the state?

The Bible says that the parents are, and that God has made us male and female.

Biology says we are male and female. One or the other. For example, the National Institute for Health notes, “The biological differences between the sexes have long been recognized at the biochemical and cellular levels. Rapid advances in molecular biology have revealed the genetic and molecular bases of a number of sex-based differences in health and human disease.”

In August 2020, I interviewed Tony Perkins, president of the Family Research Council, who noted that one silver lining from the pandemic was that parents got to see, many for the first time, what their children were actually being taught in their children’s schools.

He told me, “When you take a look at the sex ed curriculum, there is an effort to indoctrinate children, not only in sexual activity, but within the whole LGBTQ agenda in terms of creating sexual confusion among our children.”

I once interviewed Walt Heyer, a former transsexual. He had sex-reassignment surgery in 1983 because he believed he was a woman trapped in a man’s body. For the first eight years as a “woman,” he felt relieved. But then his depression came back and was even worse. When Jesus healed him, he embraced his original identity.

Heyer now runs the organization Sex Change Regret. He notes that over 40% of those who have had “gender reassignment surgery” have attempted suicide.

He added that gender dysphoria is a form of depression. And while puberty blockers and sex reassignment surgeries may provide temporary relief, they don’t address the root issue: “When you don’t like who you are at the core of who you are, you’re depressed about who you are.”

Why should parents, who are responsible for their children’s education and well-being, have to pick up the pieces as our society recklessly destroys these little children and their futures?

If it becomes law, I believe Florida’s legislation will prove to be a step in the right direction for a culture mired in moral relativism.

Jerry Newcombe, D.Min., is the executive director of the Providence Forum, an outreach of D. James Kennedy Ministries, where Jerry also serves as senior producer and an on-air host. He has written/co-written 33 books, including George Washington’s Sacred Fire (with Providence Forum founder Peter Lillback, Ph.D.) and What If Jesus Had Never Been Born? (with D. James Kennedy, Ph.D.). www.djkm.org​    @newcombejerry      www.jerrynewcombe.com