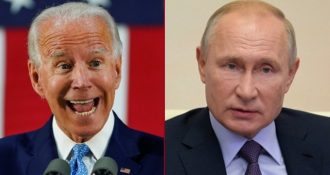 The following article, You Don’t Need to Go to Prom with Adam Kinzinger to Know Putin is a Dangerous Villain, was first published on .

Remember that time you posted something on Facebook that ran afoul of Zuckerberg’s leftist minions? They slapped a “climate change” context warning, or even put you in timeout for a few hours or days. It didn’t matter that what you said was either your opinion, to which you’re entitled in a free country, or that what you said was 100% right. Facebook is a closed and often tyrannical system. It put you in a digital gulag because it can.

You probably got angry but did it actually affect your life? Unless you make a living on Facebook, it didn’t. You mocked the content warning, or went on with your life offline until Facebook let you out of its jail. And as conservatives, we don’t lay down for Zuckerberg’s censors, nor should we. It’s consistently one-sided, and often arbitrarily applied. Leftists can spew all manner of untruths and lies all day and get away with it as long as what they post conforms to a leftwing point of view. But step over the line from the middle or the right and Zuck’s digital shock troops will whack you. We’ve all seen it happen countless times.

But a strange thing happened after Russian dictator Vladimir Putin invaded Ukraine. As his tanks rolled into a neighboring country to replace its government and subjugate its people by force, some self-proclaimed conservatives seem to be at least tacitly shrugging.

Vladimir Putin has never been the good guy. Lest we forget, he was an intelligence officer in the KGB serving the communists during the Cold War. They were the insidious enemies of freedom. They sent people to Siberia for opposing the government. They subjugated Christian churches and clergy. Communists murdered millions of Ukrainians during the Holodomor.

Putin openly rejects the open attitude toward freedom of faith and thought that Americans were once able to take for granted. We can’t do that now, thanks to Facebook, Twitter, cancel culture, and a dishonest national media, but guess who loves all of that?

He’s the king of cancel culture and gulags right now. Not digital gulags, but real ones. As he sent thousands of brutal military forces into Ukraine, Putin’s government threatened to arrest dissidents and haul them away to the kind of “re-education camps” the communists are notorious for. He threatened public executions. That’s just in Ukraine, a country and a people he is attempting to cancel right before our eyes.

Many Russians oppose his actions and policies. No one knows how many oppose him because there are no honest polls in Russia and because he is canceling their connections to the outside world. Russian people are not free to speak out. Putin is creating a gigantic version of North Korea on the edge of Europe. How can anyone be ok with this?

In America, we become indignant if the government tries to punish us for our opinions. As we should. That’s not the government’s role. But in Russia? State TV editor Marina Ovsyannikova photobombed a live Putin propaganda broadcast with a sign telling viewers to reject the lies they were seeing on their TVs. She was arrested and fined and her ultimate fate is far from clear, but it’s probably not good in Putin’s Russia. He has killed journalists who report the truth. Have we forgotten Alexander Litvinenko? That was a nuclear attack on foreign soil orchestrated by Vladimir Putin.

Americans generally applaud when someone slaps back at government lies. We oppose government lying to us. We oppose police states. We fight for our rights and the rights of others, even if they disagree with us. But too many are silent or seem to be siding with a Putin regime that, first, is illegitimate by American standards, and second, is even arresting people on the streets of Moscow just for holding up signs that literally have no words on them.

If Russian lives do indeed matter, then why don’t Russians’ rights to oppose what their government is doing to their cousins and neighbors in Ukraine matter? And do Ukrainian lives matter? Putin has killed an untold number of them and sent about 3 million into neighboring countries as refugees.

Was Ukraine’s pre-war government corrupt, as some say by way of justifying Putin’s actions? Sure, at least by US standards. But that doesn’t justify Putin’s brutality, and it wasn’t as corrupt as Russia’s, which is best understood as a violent mafia face-hugging a country and making a few capos incredibly wealthy by competing with the United States on the world’s oil and gas markets. That mafia is run by a man who spent his Cold War career undermining the United States – a goal he has never given up on. Russia’s economy is only about 70% the size of the Texas economy, and its military appears to be staggeringly incompetent, but Russia is made artificially powerful by dint of its possession of nuclear weapons. Those weapons are aimed at us because America is free. Putin hates that. Vladimir Putin is a communist monster who doesn’t deserve any American support.

A.J. Rice is author of the book, The Woking Dead: How Society’s Vogue Virus Destroys Our Culture. He serves as CEO of Publius PR, a premier communications firm in Washington D.C.

Continue reading You Don’t Need to Go to Prom with Adam Kinzinger to Know Putin is a Dangerous Villain ...