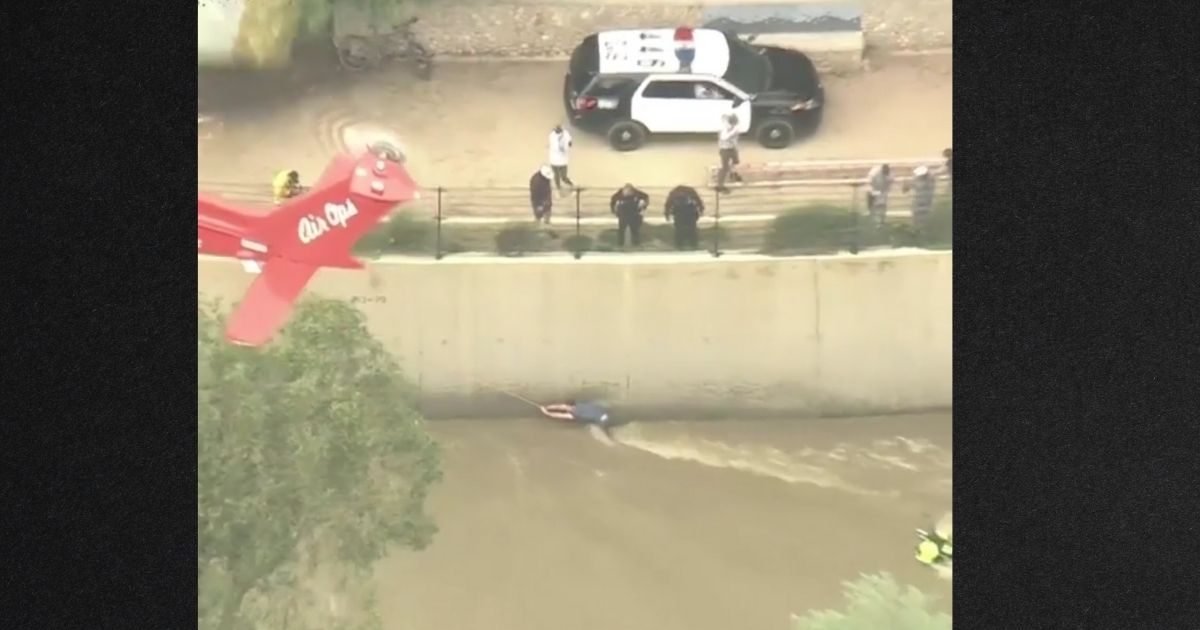 Many daring rescues that are pulled off are just as miraculous for the rescuer as they are for the rescuee. Plenty of good Samaritans put themselves in danger without the training or equipment necessary, and sometimes it works out — but other times, it doesn’t.

The Los Angeles Fire Department put out a PSA after a recent rescue involving two people and a dog. Thankfully all three came out of the emergency alive, but both people had to be taken to the hospital and the outcome could have been far worse.

The problem began on Monday, when a German shepherd mix named Scooby got into a section of the Los Angeles River, which was especially turbulent due to recent rainfall.

Most of the LA River is not what many would think of when they hear the word “river”: It’s a concrete waterway that channels water flow. It can become treacherous, slippery and nearly impossible to escape when there is an influx of water.

On Monday, the LAFD estimated the water was running at 5 to 10 mph, according to KABC-TV.

“Heavy downpour earlier in the day quickly transformed the river bed from dry concrete into a swift moving river, putting the lives of anyone trapped within it at risk,” the LAFD posted.

The LAFD arrived at around 2 p.m., and the L.A. Animal Services’ Specialized Mobile Animal Rescue Team was also on-site to help.

A woman, the owner of the dog, had gone in after her pet and also become trapped. She refused a rescue ring from first responders because she didn’t want to let go of her dog, but they eventually managed to haul her up out of the river, sans dog, using a rope system, and she was taken to the hospital.

A firefighter then attempted to corral the scared dog, but the dog was able to touch the bottom of the river at some spots and resisted, breaking free and moving downriver.

At about 3 p.m., with the dog still on the loose, a 28-year-old man jumped in and tried to rescue Scooby and his efforts were rewarded with multiple bites from the terrified dog. The good Samaritan held on for some time, but eventually the dog got free again and the man was lifted out of the river by firefighters and then taken to the hospital.

“LAFD is STRONGLY asking ALL bystanders to stay OUT of the LA River as we continue our efforts both from the ground and the air to rescue the dog,” the LAFD then posted on their social media platforms.

“By going in the water you are created another human rescue which puts all at risk…including yourself.

It wasn’t until several hours after the start of the rescue that the dog finally reached a plateau in the river where firefighters and SMART team members could stand up and safely detain the dog, harnessing him so that he could be hauled up and out of the predicament he’d gotten himself into.

Unlike his human counterparts, the dog sustained only minor scrapes and a vet check cleared him as being healthy and surprisingly unscathed.

“Scooby had light abrasion on his paws but was otherwise fine considering his ordeal. He has been reunited with his family tonight,” L.A. Animal Services SMART posted. “Great work from both LAFD swifwater personnel (SMART trains with them on a regular basis along with … Heavy Rescue and Urban Search and [Rescue] teams) and our very own LA Animal Services SMART members for a safe and successful rescue!!”

While everything turned out for the well-intentioned people involved in this rescue, the LAFD posted a strict warning about do-gooders getting in over their heads.

“While the desire to help is understandable, this type of action is extremely dangerous,” they posted, using the good Samaritan as an example. “It not only puts the life of the bystander at risk but now creates another victim for the firefighters to handle. The man was able to grab the dog and managed to stay afloat for a ride downstream until another bystander tossed down a rope.

“He held on but the water was too strong and the dog broke away. LAFD Air Operations was in place and latched onto him just in time, as his hands gave way on the rope. He was raised up and over the fence, then collapsed onto the ground, exhausted. He was later transported for injuries sustained during efforts, lucky to be alive.

“While this incident resulted in three safe rescues, it could very easily [have] been a different outcome. Merely six inches of fast-moving water can sweep a person off their feet. It takes only 12 inches to move most cars off a road. LAFD firefighters have the safety equipment and specialized training to make these rescues – while civilians do not. It is imperative that bystanders do not intercede and put more lives at risk.”