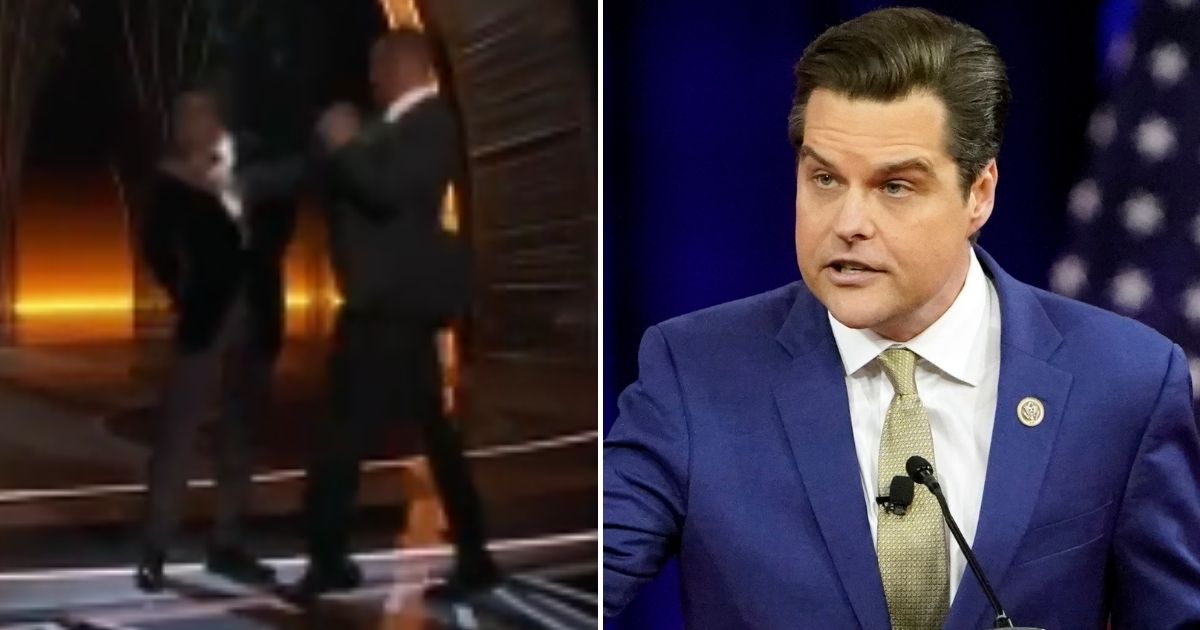 The following article, Matt Gaetz Blasts Will Smith, Hypocritical Dems with Scathing Take on Slap Heard Round the World, was first published on Flag And Cross.

How was Will Smith able to smack Chris Rock in the face and walk back to his seat as if nothing had happened?

Republican Rep. Matt Gaetz is pointing out elitist Hollywood liberal hypocrisy by comparing the code of conduct at the Oscars with a far different venue.

Less violence at the Trump rally than at the Oscars.

Will Smith walked onto the stage during Sunday’s Oscars and brazenly slapped Chris Rock in the face.

And the exchange after, apparently via Japanese TV. pic.twitter.com/HX2UTVU2VJ

Smith was upset about a joke Rock made about his wife, in which he alluded to her bald head.

Rock appeared flustered and stunned after the public assault, which is all but unprecedented in the history of the live awards show.

After taking his seat, Smith angrily shouted at Rock, telling him to “keep my wife’s name out of your f****** mouth.”

The bizarre display led some to speculate it was a scripted stunt, only for the audience to slowly realize that the altercation was in fact genuine.

In comparison, in the rare case that violence does occur at Trump rallies, it’s almost exclusively agitated by progressive performance artists seeking to cause a scene.

If any conservative slapped someone in the face at a Trump rally in even the most slightly liberal jurisdiction, it’s likely a progressive prosecutor would throw the book at them.

The entire incident raised allegations of elitism and double standards.

Why are millionaire celebrities given a free pass to assault people during awards shows?

The Los Angeles Police Department announced that Rock had declined to file a police report after the incident, even though he has a clear-cut case against Smith.

The Academy, which hosts the Oscars, issued a tweet criticizing Smith. Smith won the Oscar for Best Actor during the show, just minutes after assaulting Rock.

The Academy does not condone violence of any form.

Tonight we are delighted to celebrate our 94th Academy Awards winners, who deserve this moment of recognition from their peers and movie lovers around the world.

Perhaps if these celebrities weren’t treated with privileges in the legal system, they wouldn’t be so inclined to commit a crime on camera in front of thousands of people.