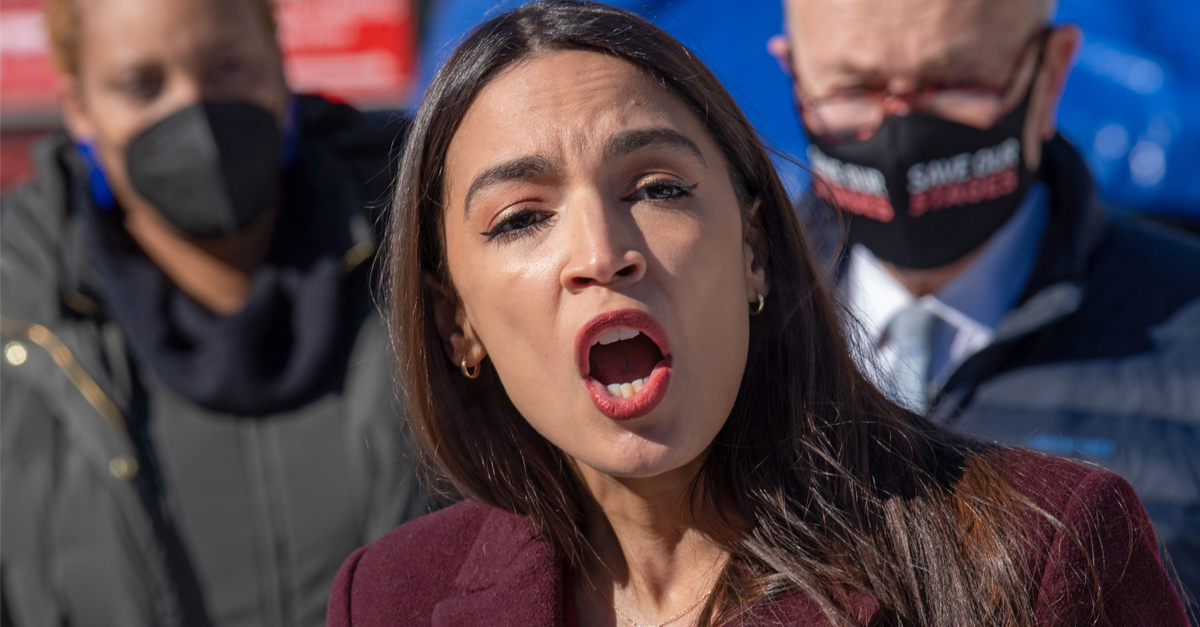 Democratic Rep. Alexandria Ocasio-Cortez of New York is calling for Justice Clarence Thomas to resign from the Supreme Court due to ethical breaches.

In a tweet, Cortez warned that if Thomas does not voluntarily resign, he should face impeachment.

If not, his failure to disclose income from right-wing organizations, recuse himself from matters involving his wife, and his vote to block the Jan 6th commission from key information must be investigated and could serve as grounds for impeachment.

Cortez’s comments come after scrutiny of Thomas due to accusations that his wife was part of efforts to overturn former President Trump’s defeat in the 2020 election.

However, Virginia Thomas has a background as a conservative activist and had a connection with Mark Meadows, Trump’s chief of staff.

CBS News and the Washington Post obtained text messages between Virginia Thomas and Meadows and reported that these messages from Thomas urged Meadows to pursue efforts to overturn the 2020 election results.

“Those messages — part of 29 total messages obtained — reveal an extraordinary pipeline between Virginia Thomas, who goes by Ginni, and then-President Donald Trump’s top aide during a period when Trump and his allies were vowing to go to the Supreme Court in an effort to subvert the election results,” CBS News reported.

Virginia Thomas’ connections to the former Trump administration — along with any possible involvement in the election controversy — have made Democratic lawmakers question Clarence Thomas himself and the integrity of his rulings.

Virginia Thomas said in her interview with the Washington Free Beacon that her husband’s work and legal decisions are not affected by her work and that the two keep their careers very separate.

“Like so many married couples, we share many of the same ideals, principles, and aspirations for America. But we have our own separate careers, and our own ideas and opinions too. Clarence doesn’t discuss his work with me, and I don’t involve him in my work,” Thomas told the Washington Free Beacon.

But some are still questioning Justice Thomas’ rulings that have been related to the election.

There have been at least 10 rulings from the court related to the 2020 presidential election. Thomas has not recused himself in any of those cases, The Hill reported.

“The ruling that has drawn the sharpest criticism came in January, when Thomas was the only justice who dissented in an 8-1 ruling that cleared the way for House investigators probing the Jan. 6, 2021, insurrection to obtain Trump-era White House records,” The Hill reported.

In light of this, many Democrats are demanding that Thomas resign or recuse himself from cases related to Jan. 6 or the election.

Jayapal also added that the situation was “outrageous” and “stunning” that Thomas hasn’t recused himself or resigned yet.

“Clearly the Supreme Court is in need of ethics reforms,” Jayapal added.

But when it comes to questions of impeachment, as Cortez suggested, many Democrats are still hesitant, Politco reported.

When asked about his colleagues’ calls to censure or even impeach Thomas, Nadler said: “It’s much too early to talk about either one of those. I think we have to wait and see what the Jan. 6 committee finds.”

“To see something like this, it’s pretty damn outrageous,” Vargas told Politico. “I don’t think it reaches to that level of impeachment yet.”

She is a fool

The dems should be more concerned at how they are ruining the country. AOC needs to go and the rest of the squad

The all think they are the smartest people in the room