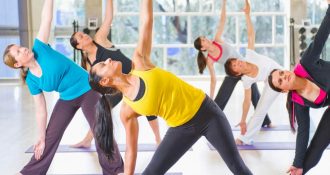 The following article, Woke MSNBC Now Says You’re a ‘Neo-Nazi’ if You Exercise, was first published on .

Here we go again… now leftists are claiming that if you exercise you are somehow a “Neo-Nazi.” No, they’re serious.

What is wrong with these people? Well, you know. They’re leftists.

This from the nitwits at MSNBC:

Physical fitness has always been central to the far right. In “Mein Kampf,” Hitler fixated on boxing and jujitsu, believing they could help him create an army of millions whose aggressive spirit and impeccably trained bodies, combined with “fanatical love of the fatherland,” would do more for the German nation than any “mediocre” tactical weapons training.

The intersection of extremism and fitness leans into a shared obsession with the male body, training, masculinity, testosterone, strength and competition. Physical fitness training, especially in combat sports, appeals to the far right for many reasons: fighters are trained to accept significant physical pain, to be “warriors,” and to embrace messaging around solidarity, heroism, and brotherhood. It’s championed as a tool to help fight the “coming race war” and the street battles that will precede it.

These people take leave of their senses more every day.

But this is what you get when you decide that traditions, logic, and common sense need to be eliminated and replaced with relativism.

Liberalism really is a mental disorder.