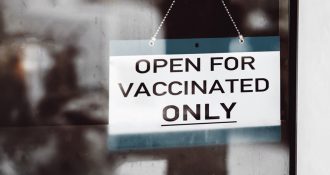 The new mayor of New York City, Eric Adams, is hypocritically ending the vaccine mandate for ultra-rich athletes and entertainers but is still firing city workers and other regular citizens.

Of course, it makes sense that Adams has realized that forcing sports stars, rock singers, and actors on Broadway to be vaxed or banned is bad for the city’s finances.

But if it is fine for the rich and famous to go unvaxed, why isn’t it OK for the common, everyday citizen?

Like always, Democrats are pushing a two-tiered system, one for their rich pals, giving them greater freedom, and one punishing we poor schlubs who pay all the bills.

Unvaccinated New York City workers who were fired from their jobs for not getting their shots, unleashed fury on Mayor Eric Adams on Thursday after he lifted the vaccination mandate solely for professional athletes and performers.

Adams held a press conference in the New York Mets’ Citi Field, with representatives from the Yankees and the Mets, to announce that he was lifting the ban on unvaccinated big league jocks from competing in sports, and actors and musicians from taking the stage.

The move doesn’t help 9-to-5 workers across the five boroughs who either lost their jobs or can’t work because of the vaccine mandate, held over from the last mayor, requiring all workers have their jabs.

Adams recently found protesters over his announcement, too:

HAPPENING NOW: @NYCMayor confronted by former city employees who say they were fired over the vaccine mandate. Mayor Adams is in Brownsville to make a health related announcement @PIX11News #NYCPolitics pic.twitter.com/Gp4K7Jk1tw

It’s just another example of the Democrat’s act of do as I say, not as I do.