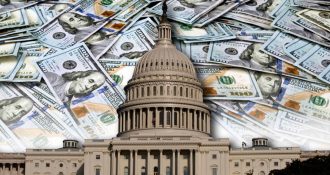 This is why government cannot be trusted or allowed to “fix” things for us all. It’s because all they ever do is waste money without ever “fixing” anything.

Now that COVID is nearly in the rearview mirror, there is an accounting on the trillions spent to “fix” the situations that government forced on us in its overzealous reaction to the virus. And, wouldn’t you know it, most of the funding they put to COVID was wasted, stolen, and misappropriated.

According to The Blaze, COVID relief funds have been wasted by the billions.

A high-end 29-story hotel with 800 rooms in Florida that will have views of the Atlantic Ocean and an 11,000 square-foot spa was provided with $140 million by officials in Broward County.`

In Massachusetts, lawmakers supplied $5 million to pay off the debts of the struggling Edward M. Kennedy Institute for the U.S. Senate in Boston – a nonprofit civic engagement and educational institution honoring the late senator. The Edward Kennedy Institute operated at a $27 million loss between 2015 and 2019, according to tax filings.

New Jersey used $15 million for upgrades to bolster the state’s bid to host the 2026 World Cup.

Officials in Woonsocket, Rhode Island, signed off on spending $53,000 to remodel the town’s city hall.

Those above are not the only states that wasted COVID relief funding on non-COVID spending.

Again, none of this spending should ever have been authorized in the first place.