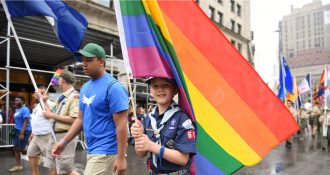 The following article, You Lost in Florida, Leftists: Even Democrats Support State’s Education Bill, was first published on .

The left has been desperate to makes its lies about Florida’s Parental Rights in Education bill the accepted truth, but even their own voters don’t believe them.

A new poll finds that the left’s attempt to term the education bill the “don’t say gay” bill is not helping them beat back the sensible bill that is about to become law in the Sunshine State.

The poll finds that even a majority of Democrats think that it makes sense not to expose tiny school tots under ten years of age to radical, dangerous, left-wing, sexual practices.

A majority of likely Democratic primary voters in the state of Florida support controversial parental rights legislation that LGBTQ+ activists, the Democratic Party, and the national media have inaccurately called the “Don’t Say Gay” bill.

These results come from a poll conducted by Floridians for Economic Advancement, a political action committee that supports candidates from both major parties. The group’s survey asked 701 likely Democratic primary voters about language from the Parental Rights in Education bill that was recently passed by the Republican-controlled legislature and is expected to be signed into law by Gov. Ron DeSantis.

The survey asked, “Should students in Kindergarten through 3rd Grade be taught about sexual orientation in the classroom by their teachers?”

By a margin of 52-36%, a majority of the most politically active Democrats in Florida said “definitely no” or “somewhat no” in response to that question.

FL Capitol Dems opposed it & made it a top messaging priority

(This is unmentioned for some reason in the story I QTd. This poll jibes w/others I’ve seen) https://t.co/6HBMz2MW4d pic.twitter.com/bfS9ulp58A

The fact is, the bill does not “target” any “community.” It does not stop schools from talking about gender identity. And it does not have the word “gay” in it anywhere.

Everything the left says about this bill is an absolute lie.