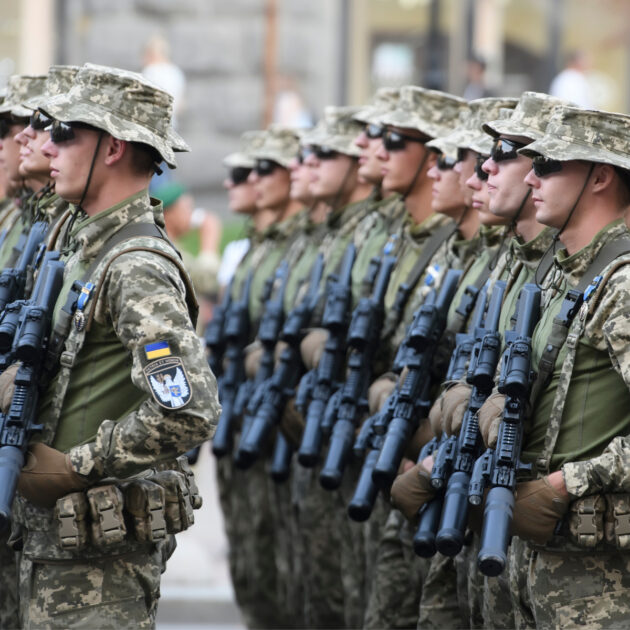 The following article, Transgender Stopped at Ukrainian Border, Told to Turn Around and Fight After Guards Find Out He’s Biologically Male, was first published on Flag And Cross.

Ukrainian men who identify as women are being turned back attempting to flee the country, as they are, in fact, men and thus required to remain and be conscripted for military service.

“Trans women are reportedly being denied passage to safer countries, despite their legal status as women and the danger posed by Russia’s transphobic policies,” the U.K. Guardian lamented in a report on Tuesday.

“Ukrainian border guards undress you and touch you everywhere,” said Judis, a transgender “woman” who spoke with the British newspaper. “You can see on their faces they’re wondering ‘what are you?’ like you’re some kind of animal or something.”

Although Judis’ birth certificate identifies him as female, Ukrainian border guards determined he was a male and refused to allow him passage into Poland, where women and children have been fleeing to escape the invasion.

Men have not been allowed to leave the country since martial law was declared on Feb. 24.

Activists told The Guardian that dozens of transgender “women” have also been turned away despite being legally recognized as women, “with many fearing for their lives in the event that Russia’s transphobic regime takes over.”

Ukraine isn’t so hot when it comes to transgender rights all the same. Although transgenders have been allowed legal recognition since 2017, they must undergo extensive psychiatric observation and a “lengthy bureaucratic process” to change official records, so many found themselves still stuck with “male” on their passports when Russia invaded.

“Martial law says all males are obliged to serve in the military, so they can’t leave the country,” Ukrainian transgender activist Olena Shevchenko told The Guardian.

“Technically, the law applies to trans people as well, including both certified trans men and trans women who had not changed their documents. But it sounds like Ukrainian border guards are preventing even trans people with a valid certificate reflecting their new gender from leaving Ukraine, and nobody knows why.”

Really? Nobody knows why?

The border guards were pretty straightforward with Judis as to why he wouldn’t be allowed to cross. They told him “you’re a guy, so get the hell out of here” and that he should be grateful they didn’t call the police, The Guardian reported.

“‘Go to the war’, they replied, adding that more than 3 million people had already fled the country and they weren’t going to let me out,” he said.

Well, this is going to be awkward for everyone with a Ukraine flag right next to their pronouns and LGBT pride emojis in their Twitter bio.

Here’s the blunt reality — men are men, plain and simple.

We are witnessing this brutal reality here in the West as University of Pennsylvania Lia Thomas and other transgender athletes blow away their female competition thanks to woke athletic governance organizations that prefer to virtue signal their acceptance of LGBT+ ideology regardless of how it hurts female athletes. And transgender “women” in Ukraine are getting a horrifically brutal reality check that, when it comes down to defending one’s country, biology really does matter.

What’s ironic, of course, is that the Westerners who have been most emphatic about supporting the Ukrainian government as it fights the Russian invasion probably didn’t even stop to consider the fact that the country isn’t exactly a glorious paradise of liberalism and democracy before jumping on the bandwagon.

Just as I’m sure so many moderns who support transgenderism because it’s en vogue culturally haven’t spent a lot of time considering that it doesn’t apply to real life quite as easily as academia and the woke intelligentsia make it sound.

As an American Supreme Court nominee struggles to define what a “woman” is, Ukrainians are sticking to the tried-and-true definition because they’re both a) not a Western, wokified country and b) they need men to fight the Russians.

The blunt, impolite, politically incorrect basic truth about gender identity and all gender politics applies to Lia Thomas, Judge Ketanji Brown Jackson’s professed ignorance of basic biology, and Ukraine’s refusal to let men flee the country even if they identify as women.

That is, that our bodies define who we are, and men and women are different. What’s more, I would strongly assert, we sorely need to be able to define the differences between men and women in order to continue to protect women.

This is why men simply cannot be women. As Thomas unfairly dominates his fellow competitors in the pool, transgender “women” fleeing Ukraine would be granted privileges that need to be reserved for women and children, that is, the privileges of a protected, physically weaker class of humans, biologically suited to better tend to and protect the children they flee with, to run to safety while men stay and fight.

My heart continues to ache for gender dysphoric individuals, and I doubt this compassion will abate anytime soon, but the sympathy I have for them can never change the fundamental truth that human civility will never be preserved if we diminish the definition of a “woman.”

War, like athletics, makes it impossible to deny the undeniable about gender — no matter how much it hurt men who identify as women, men can simply not be women, and women sorely need men to remain men.

Otherwise, there will no longer be any definable concept of “women’s rights” — much less the godly, chivalrous, moral protection that women sorely need.

We must be willing to die on this hill, if need be, if there is to be any hope of maintaining a fair society for women.

Continue reading: Transgender Stopped at Ukrainian Border, Told to Turn Around and Fight After Guards Find Out He’s Biologically Male ...