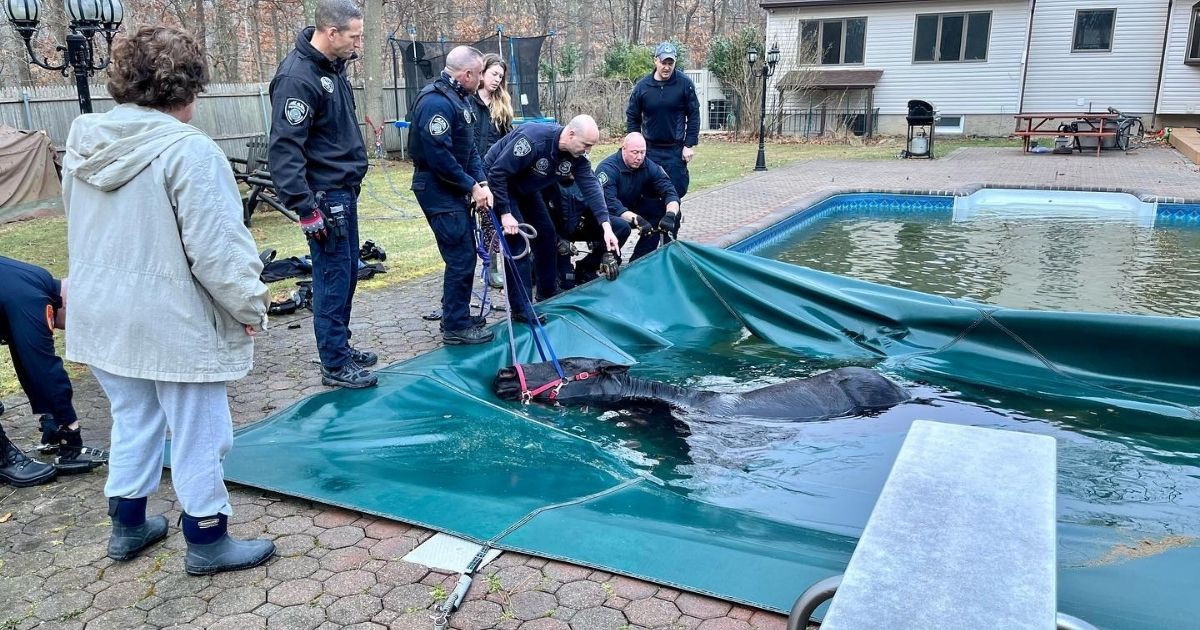 The following article, First Responders Rescue Horse After It Jumps Fence, Falls Into Pool and Gets Caught in Pool Cover, was first published on Flag And Cross.

It’s not every day that first responders get a call to help out a horse in a tricky situation, but on Saturday, that’s exactly what happened for local departments on New York’s Long Island.

A 3-year-old horse named Penny had decided to indulge her adventurous side and jumped a fence, got into a pool with a pool cover and broke through the cover on the deep end, becoming trapped.

The Suffolk County Police Department and the Bohemia Fire Department posted about the incident and shared photos of how the rescue went.

“Just before 8am on Saturday March 19th the tones dropped for an animal rescue at a residence on Pond Rd for a horse in a pool caught in the pool cover,” the Bohemia Fire Department wrote.

“Assistant Chief Brian Olsen arrived on scene and began coordinating efforts with SCPD ESU and SCPD 5th Precinct officers. Crews from both agencies worked together to move the horse to the shallow end of the water and freed her from the cover.

“After taking a few moments to gather herself she was guided to the pool steps and with some assistance she was able to safely exit the water. Great job by all!”

The stubborn horse would have had little chance of making it out entirely on her own, but as she was disentangled from the cover and directed to shallower water, she was able to eventually find the steps and her own way out.

Before she was out, though, one photo clearly shows how much coaxing it took to persuade Penny to exit the pool.

Firefighters, police officers, a man in jeans and a jacket and a barefoot woman in pajama pants all pulled at a strap placed around the horse and put pressure on the lead attached to her halter, but the large black mare didn’t look ready to budge at all, resisting their efforts with her ears pinned back.

There was even a flake of hay floating in the water on the steps, but the food wasn’t enough to convince her, either.

The mare didn’t look too much happier once she was out of the water, either, still pinning her ears and looking rather annoyed.

“With the warmer temperatures hitting Long Island this week, this 3-year-old horse, Penny, decided to go for a swim in her backyard pool,” the Suffolk County Police Department shared.

“Unfortunately this foal became entangled with the pool cover and stuck in the deep end.

“Fifth Precinct police officers, Emergency Service Section officers, and members of the Bohemia Fire Department responded on March 19 at approximately 7:50 a.m. and together, were able to safely pull Penny to the shallow end and out of the pool.”

“Penny was so grateful that she took the time to snap a group photo with some of her rescuers,” the department said.

While “gratitude” might not have been the thought on the forefront of Penny’s mind, her owners were no doubt thankful for the help and got a little more insight into the attitude of their sassy equine.

Many commented to chide the owners for not having their pool fenced, but people claiming to know the owners commented on the police department’s post to say that the horse had jumped a fence that was at least 5 feet tall to get to the pool.

Other commenters said they’ve seen pool covers advertised as being able to support the weight of an elephant — but Penny apparently found out otherwise.

Continue reading: First Responders Rescue Horse After It Jumps Fence, Falls Into Pool and Gets Caught in Pool Cover ...