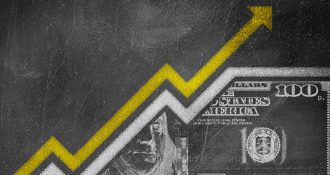 The following article, Fed Chair Powell Warns that Bidenflation will Last for at Least Three Years, was first published on .

Federal Reserve chair Jerome Powell is warning that inflation is real and Joe Biden’s destruction of our economy will hurt is all for at least three more years.

This is a far different situation that the claims coming out of our Commander in Thief. According to Biden, inflation is “temporary.”

In July, for instance, Biden was waving off worries about inflation and saying that inflation won’t last long.

But the fed chair disagrees.

According to the Washington Examiner, Powell is warning that Bidenflation is here to stay and for years to come:

Powell pledged stronger Fed actions, including bigger increases in interest rates, to bring inflation under control. But given current conditions, he admitted that inflation is going to be around for a while. “As the magnitude and persistence of the increase in inflation became increasingly clear over the second half of last year, and as the job market recovery accelerated beyond expectations, the [Fed’s Federal Open Market Committee] pivoted to progressively less accommodative monetary policy,” Powell said. “I believe these policy actions and those to come will help bring inflation down near 2% over the next three years.”

Three years. That would be until early 2025. In between, we will have the 2022 midterm elections and the 2024 presidential election. And that is the political consequence of Powell’s speech.

The polls are showing that Americans believe Powell more than they believe lyin’ Biden.

“The more significant of the polls comes from Emerson, whose polling has been a bit kinder to Joe Biden on job approval. He gets a 43/49 overall from Emerson, a slight improvement over last month’s 42/50. Among independents, however, both Biden and Democrats take a beating,” Morrissey wrote.

Morrissey added a large amount of other polls showing that Americans are blaming Biden for all this… despite his attempts to blame Vladimir Putin.