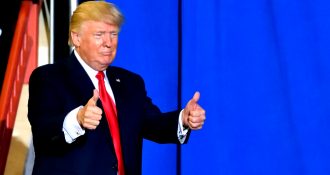 President Donald Trump’s election war chest fund is so huuuuge it has outpaced both the Democrat and Republican Party’s, as well as Joe Biden’s election funds.

Trump has amassed a $110 million campaign fund ahead of the 2024 elections. He racked in $3.5 million in February alone, according to his filings.

Trump's post-White House political operation, Save America, raised $3.5M in February, and now has over $110M cash on hand.

That's more cash on hand than the RNC, the DNC, and the Biden campaign combined. https://t.co/bgubtrg9ZF pic.twitter.com/54o2mXsap4

“Trump has endorsed GOP candidates at the federal, state and local level, focusing on those who support his baseless claims the 2020 presidential election was stolen from him or are challenging Republican incumbents who opposed him,” Newsweek reported.

Trump has also been at the forefront of helping candidates in the coming 2022 election cycle and has championed 130 candidates since he left the White House.