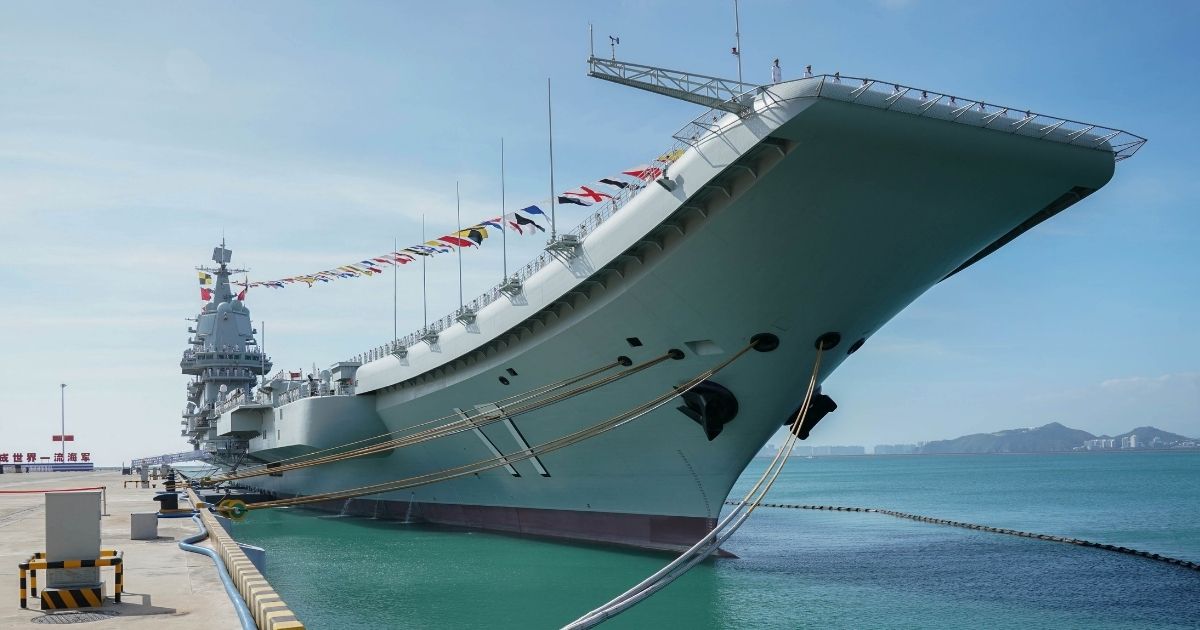 Taiwan’s Ministry of Defense confirmed the passage of the Chinese vessel, Reuters reported.

The news agency quoted a “source with direct knowledge of the matter” as saying the Chinese aircraft carrier Shandong had sailed through the sensitive waters somewhere near the Taiwanese island of Kinmen, right across the sea from the Chinese city of Xiamen.

“Around 10:30 a.m. the CV-17 appeared around 30 nautical miles to the southwest of Kinmen, and was photographed by a passenger on a civilian flight,” the source told Reuters. CV-17 is the Shandong’s service number.

The source said the aircraft carrier did not carry any aircraft on its deck and headed northwards through the waterway. According to the source, Taiwan had dispatched its warships to monitor the situation, Reuters reported.

When journalists asked Chinese foreign ministry spokesman Zhao Lijian about the Shandong’s transit, he referred them to the nation’s defense ministry, which did not provide a comment.

However, Zhao did say the carrier was passing through the strait as part of a “routine training schedule.”

“We should not associate this with the communication between the heads of state of China and the United States. You may think it is too sensitive. What is sensitive is you, not the Taiwan Strait,” he told journalists, according to Reuters.

China often conducts naval and air maneuvers near Taiwanese territory to assert its claims over the democratic island nation. China sees Taiwan as a breakaway province that will eventually reunite with China. However, a majority of Taiwanese oppose rule by the Chinese Communist Party.

The source told Reuters that the timing of the aircraft carrier’s transit was “provocative,” pointing out that it was strange that the ship sailed through the waters in the daytime when previously China carried out such naval maneuvers at night.

The move comes amid worries in Taiwan that the island nation’s armed forces might not be ready to confront a revanchist China should it attempt an invasion of Taiwan just like Russia invaded Ukraine.

CNN reported on Thursday that Taiwan has introduced a rigorous 14-day training schedule to bolster the combat readiness of the nation’s reserves.

The country has invested a large amount of its budget in defense this year, setting aside $8.7 billion for the next five years to bolster its asymmetric warfare capabilities, according to the outlet.

“The recent situation in Ukraine proves that, in addition to international support and assistance, it boils down to the unity of our people to safeguard our country,” President Tsai Ing-Wen said while she was inspecting training on Saturday, CNN reported.

“This training mission implements the spirit of all-out defense,” she said. “Every reservist … has to assume that war could happen in their hometowns.”

J. Michael Cole, a senior fellow at the Global Institute Taiwan, told the outlet, “The developments in Russia demonstrate the assumptions that autocratic leadership will always make rational decisions have been thoroughly destroyed by Vladimir Putin — in his decision to invade Ukraine.”

“It does not mean that Xi Jinping will tomorrow decide to use force against Taiwan because his friend in Moscow decided to do so against Ukraine,” Cole said. “But it makes it evident that there is a possibility — however slim — that autocratic regimes could decide for their own calculations, their own reasons to use force against a democratic country.”