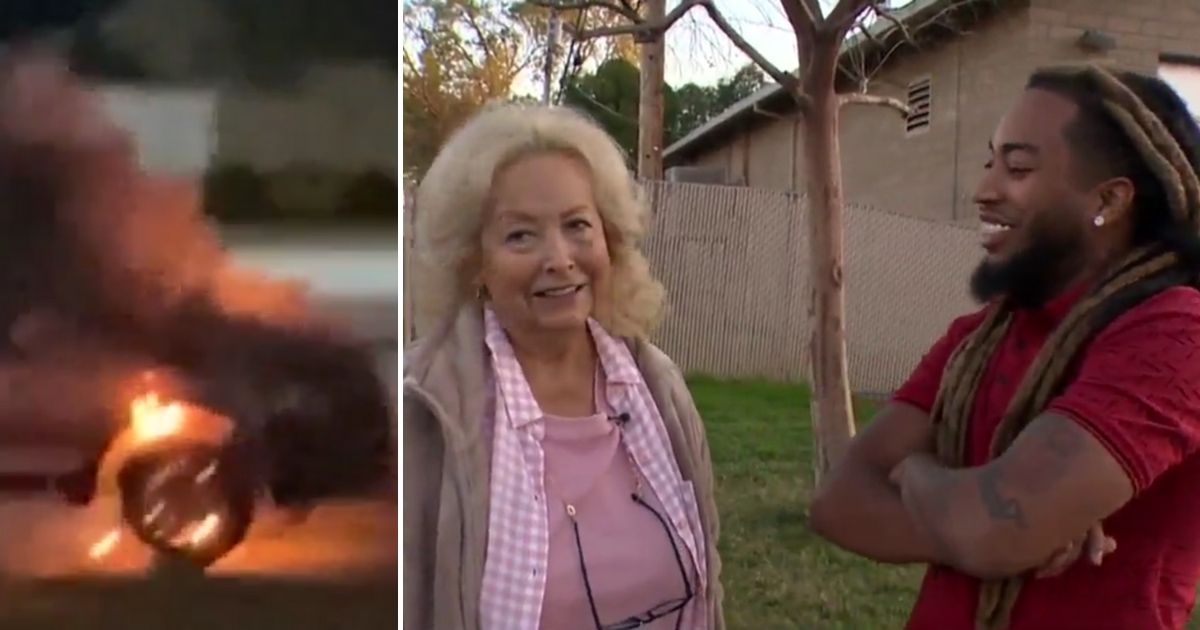 The following article, Grandma Stuck in Burning Car Saved Just In Time by Good Samaritan: ‘You Became My Grandson That Day’ , was first published on Flag And Cross.

Kristine Smith nearly died in a car fire on March 2 after her car hit something and erupted into flames, but she’s alive today thanks to the bravery of a stranger who is now considered family.

Smith, from Sacramento, was driving on 1-80 in Citrus Heights, Calif., with her husband and their granddaughter when their car hit something and caught fire.

Apparently, her husband and granddaughter managed to exit the vehicle, but Smith had recently had knee surgery and couldn’t get out of the car. Neither her husband nor her granddaughter could help her. Trapped as the flames grew higher and higher, Smith thought she was done for.

“I just heard the pop underneath and I figured we had a flat tire,” Smith said, according to KCRA-TV. “I wasn’t thinking of anybody stopping in that situation because the fire was so big.

“It could have blown at any time. It went that fast.”

But at that moment, Elton Ward was driving by with his daughter. The good Samaritan spotted the burning car and immediately pulled over to help.

“And then I see this car in flames, so I’m like, that’s insane,” Ward recalled.

Despite the dangerous situation the fire posed and the rate at which the fire was growing, Ward managed to get Smith out and away from the car — and just in time.

“Literally in a matter of 30 seconds, boom, first explosion, loud, big, big explosion,” he said. “Then, when that explosion happened, huge flames come up.”

Sacramento Metro Fire got there minutes later — minutes after the explosion, minutes too late if it hadn’t been for Ward.

“Had they not stopped and made that rescue, there’s a very strong likelihood that that, those victims would have perished in that vehicle fire,” he acknowledged.

After the ordeal, Smith and Ward met up again on Sunday under much better circumstances, and Smith declared Ward the newest member of her family.

“She would not let me go, that’s for sure,” Ward laughed.

“Nope!” Smith quipped. “You became my grandson that day.”

“We all got grandmas, grandpas, little nieces, nephews, brothers, whatever. If you all see my people, I want you to try to help my people. So, that’s somebody’s people,” said Ward.

“We are totally grateful for his help,” Smith said. “Thank the good Lord, he sent me a good Samaritan that stopped for me, so I think that it all comes back.

“The community needs to have more young people and more examples like this.”

Continue reading: Grandma Stuck in Burning Car Saved Just In Time by Good Samaritan: ‘You Became My Grandson That Day’  ...