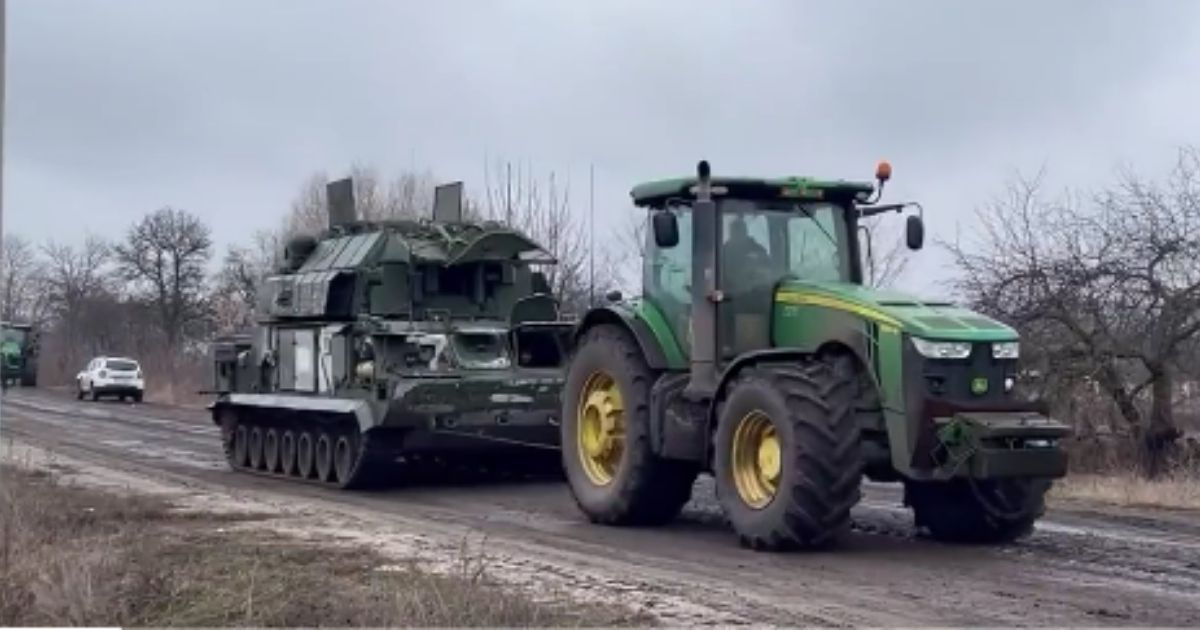 As Russia throws everything it has at Ukraine, a new video shows reportedly shows what happens when a Ukrainian tractor meets a Russian missile system.

It should be noted that in the flood of videos and photos purporting to show incidents from the conflict, it is often very difficult to confirm the veracity of either.

In its reporting on the video, the Daily Caller noted that the Russian Tor-M2 is a surface-to-air missile system used by the Russian military.

The Ukrainian “tractor army” was spotted carrying a Russian Tor-M2 (very probably the same one captured a couple of days ago). pic.twitter.com/galij6u2DY

Peter W. Singer, a security expert, said social media shapes perceptions of the war, according to The Washington Post.

“You can’t disentangle the information side of the war from the physical battlefield side or from the geopolitical diplomacy side” anymore, he said. “They all matter.”

Ukrainian resistance has changed as Russian forces have begun to occupy cities in the southern part of the nation.

Ukrainian President Volodymyr Zelenskyy has called for citizens to come out in the streets, even after their towns have been taken, according to the New York Post.

“It is a special kind of heroism — to protest when your city is occupied,” Zelenskyy said. “Ukrainians in all of our cities that the enemy has entered — go on the offensive! You should take to the streets! You should fight!”

Ukraine’s battle against overwhelming odds and its use of social media to project an image of a nation that will never give up have attracted foreign fighters, including some Americans, according to The New York Times.

He left for Ukraine on Friday, along with his own gear augmented by other equipment supplied by fellow veterans.

“A lot of veterans, we have a calling to serve, and we trained our whole career for this kind of war,” he said. “Sitting by and doing nothing? I had to do that when Afghanistan fell apart, and it weighed heavily on me. I had to act.”

One veteran said this war has clarity other conflicts lack.

“It’s a conflict that has a clear good and bad side, and maybe that stands apart from other recent conflicts,” said David Ribardo, a former Army officer who now owns a property management business in Allentown, Pennsylvania. “A lot of us are watching what is happening and just want to grab a rifle and go over there.”

“At best, they can expect to be prosecuted as criminals,” Konashenkov said. “We are urging all foreign citizens who may have plans to go and fight for Kyiv’s nationalist regime to think a dozen times before getting on the way.”