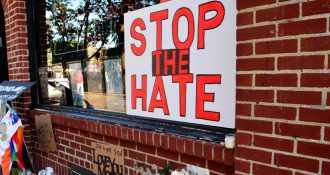 Left-wing activists were incensed over a supposed act of “racism” at a Sacramento high school, but it once again turned out to be just another hate crime hoax.

The activist students immediately began protesting the “white supremacy” at the school with outraged signs reading, “END ANTI-BLACK HATE” and “NO ROOM FOR HATE.”

But an investigation led by the school found surveillance video that proved that the signs were put up by a black student, not any white racists.

Mark T. Harris, the district’s race and equity monitor, told KOVR-TV that the student was captured on camera and she confessed to the vandalism. Harris also pointed out that the incident was not an act of “racism” because a black kid was the perpetrator, not a victim.

“I don’t believe those words that were on those water fountains were racist,” Harris told the media. “I do not believe they were hate crime or hate speech. Part of it quite honestly is because the admitted perpetrator is a young African American woman.”

But the activists still wanted the issue to protest despite that the whole thing was a hoax.

Berry Accius from the Voice of the Youth group, dismissed the fact that it was all a hoax, saying, “I disagree with it not being a hate crime because at the end of the day we understand when you have colored on one water faucet and white on another kind of faucet what that means – whether it’s 1950 or 2022.”

What a surprise, huh?