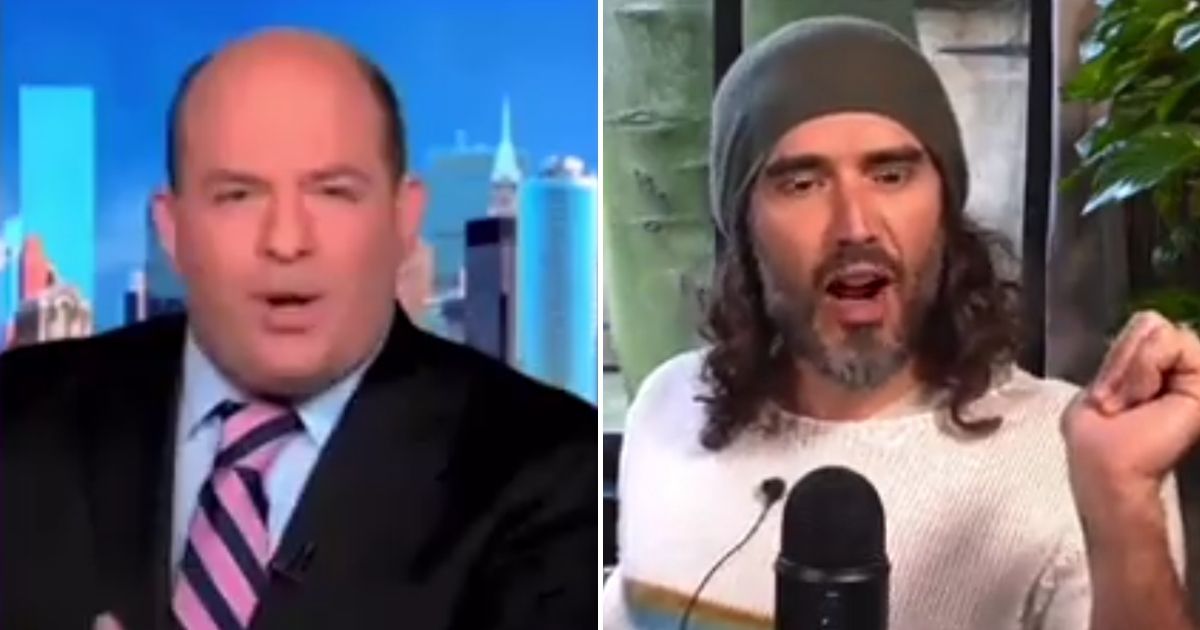 The following article, Hollywood Actor Russell Brand Imitating Brian Stelter Might Be Best Video You See on Internet Today, was first published on Flag And Cross.

Imitation may be the sincerest form of flattery, but it can also be sarcasm and satire.

Russell Brand mocking Stelter is my favorite thing of 2022. I can’t stop laughing

For my safety, someone please stop @rustyrockets

In the CNN segment appropriated by Brand, Stelter was complaining about the influence of podcaster Joe Rogan, a common topic in progressive media these days. Stelter griped, “… Not all opinions are created equal.”

Stelter claimed without evidence that Rogan was someone who “would just wing it, who make it up as they go along … figures like Rogan are trusted by people that don’t trust real newsrooms.”

“Now listen here Sonny Jim, you’re not only making people not trust you, you’re making them not trust me,” Russell whined. “Why don’t people trust me? They trust Rogan, but I’m perfectly trustworthy. Look how loose my tie knot is!”

For satire to work, it must contain an element of truth.

Brand’s video was successful because it captured the current attitude of not just Stelter, but the establishment media in general: patronizing, outraged and maybe a little panicked about their fading credibility and relevance.

The reasons for CNN’s troubles are clear in this video. Stelter used disinformation and innuendo to make his points.

“Rogan’s irresponsible. He took horse maggot medicine the other day!” Brand shrieked in his parody, pointing out how CNN misrepresented Joe Rogan’s treatment during a COVID infection.

Brand is famously irreverent and eccentric, not only in the raunchy films he’s starred in, but also during many celebrity events and appearances. He’s no conservative.

What sets Brand apart now is that he is willing to discuss topics establishment elites don’t want discussed. In this, he’s more like the liberals and comedians of earlier eras, who questioned and mocked authority.

Other Twitter users shared their responses to the clip, Brand and CNN.

This @rustyrockets video mocking @brianstelter for his view that CNN doesn’t spread disinformation while Rogan does is superb. Highly recommended. By far the most damaging disinformation comes from the corporate outlets pretending to combat it:https://t.co/lhLA28gAup

Russell Brand mocking Brian Stelter from CNN over his comments on Joe Rogan was quite enjoyable to watch.

An attack on CNN by a liberal comedian shows just how indefensible their practices have become. And it’s not just viral videos they have to worry about.

Over just the last few months, CNN has struggled with low ratings, scandals and high-profile terminations.

The Daily Mail reports Stelter may be on the chopping block. “Brian Stelter should be calling his agent to start looking for another job,” said an unnamed source.

Brian Stelter’s approach to reporting left him vulnerable to ridicule. As activist Saul Alinsky said, there is no defense against ridicule. Russell Brand scored a direct hit against an easy target, despite the wailing of the progressives.