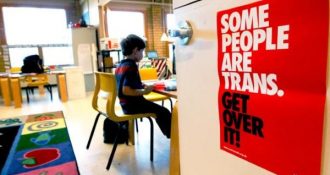 The Chicago Public Schools has been outed as teaching kids that gender is “not rooted in biology,” and withholding information from parents about kids who suddenly discover they are “transgender.”

The information about this outrage was found in a PowerPoint presentation reported on by Fox News.

A 104-slide PowerPoint presentation echoed a number of left-leaning talking points that have surfaced in trainings across the country. Titled “Supporting Transgender, Nonbinary, and Gender Nonconforming Students” the presentation argued that “everyone has multiple, overlapping identities” and that sex is assigned at birth.

“Gender & sex are socially constructed, meaning they’ve been created and enforced by the people in a society,” one slide from the presentation reads. The notes claim that “the concepts of Gender and Sex are actually not rooted in biology. Instead, they are socially constructed, which means they have been created and enforced by people in a society.”

Another slide touts “intersectionality” with the notes crediting Kimberle Crenshaw, who has also been dubbed one of the progenitors of critical race theory.

Fox added that the presentation was from Chicago’s Office of Student Health and Wellness.

The presentation also ordered teachers to keep information about children secret from parents.

“Discussing a student’s transition with their parent or guardian without the student’s explicit consent is not permitted,” the presentation warned.

“Disclosure of this kind can create an unsafe situation for the student. This is both a legal and safety concern, and there is no age restriction on this guidance,” it added.

The program added, “[p]arental consent is not required for a student name, gender marker, or pronoun change.”

This is an outrage. Parents should be up in arms about this.