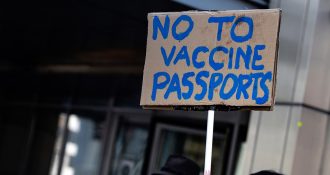 Several South Carolina Republicans are backing a bill to bar businesses from asking customers about their vaccine status as a condition of doing business.

The bill, H4848, was introduced last Thursday in the South Carolina House of Representatives.

“Notwithstanding another provision of law to the contrary,” the bill reads, “any employee, officer, agent, or other representative of a public, nonprofit, or private entity who inquires about the COVID-19 vaccination status of any student, employee, member, or anyone else seeking admission on the entity’s premises is guilty of a misdemeanor and, upon conviction, must be fined not more than fourteen thousand dollars or imprisoned not more than one year, or both.”

The state Republicans want to stop companies from demanding that businesses impose their will on customers.

“We have people in South Carolina that are losing their jobs because they have to report to their employer that they’re unvaccinated,” GOP state Rep. Mike Burns told Fox News. “We also have people who are having their insurance rates put in a different category. They’re charging up to an extra $100 a week more than the vaccinated people. It is absolutely insane to do this kind of thing.”

This would put an end to vaccine passports in South Carolina if the bill passes and is signed into law.

If I am asked whether I am vaxxed, I look at the person and ask if they pooped today. They respond with – none of your business and I say – exactly.

I disagree, it is a government mandate on the operation of private businesses. A private business should be allowed to lawfully require to enforce or not enforce vaccine and/or mask policies on employees or customers. If the employees and customers do not agree with the business’s decisions on vaccines and masks then they can go elsewhere.