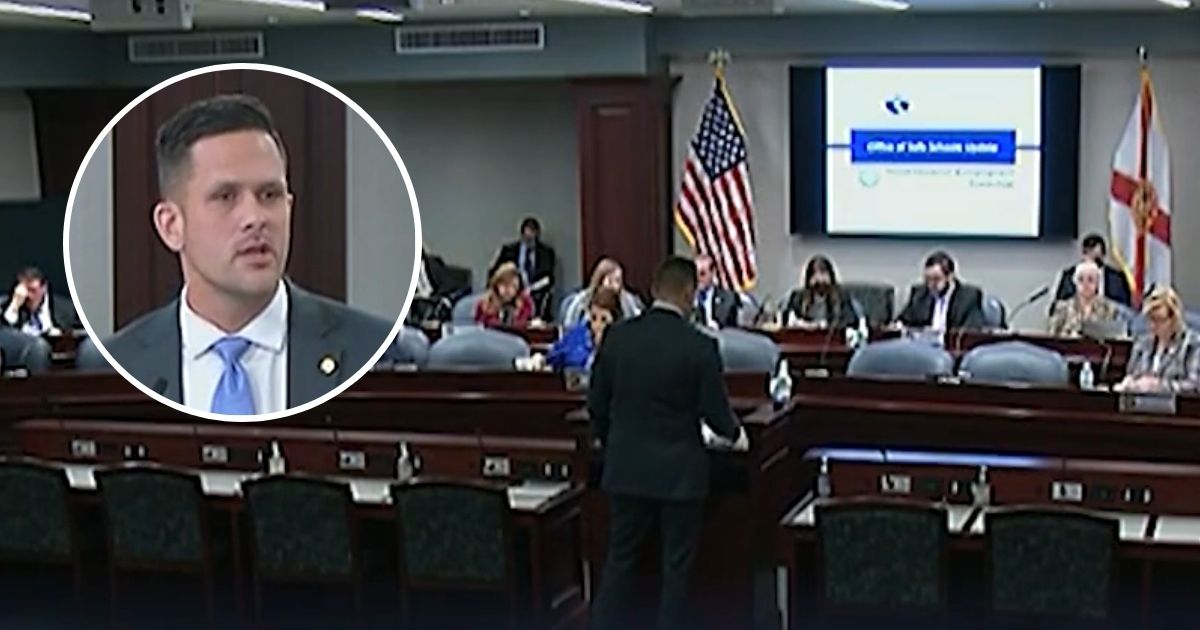 The following article, FL Republicans Draft Ingenious Bill to Chase Gender Indoctrination Out of Schools – Other States Should Copy It, was first published on Flag And Cross.

Republicans in Florida have crafted a set of bills aimed at banning formal discussions surrounding sexuality and gender from the state’s classrooms through the seventh grade.

The textually identical House Bill 1557 and Senate Bill 1834 are crafted around the state’s 2021 Parents’ Bill of Rights, designed to protect the “fundamental rights of parents to direct the upbringing, education and care of their minor children.”

They also would require schools to “adopt procedures for notifying” parents if there is a change in their children’s welfare, WFLA reported.

The bills say the “school district may not encourage classroom discussion about sexual orientation or gender identity in primary grade levels or in a manner that is not age-appropriate or developmentally appropriate for students,” which the lawmakers identified as children up to the age of 12.

During the discussion of the legislation, Florida lawmakers had questions about just how far the bill would go to curb mentioning gender identity or sexuality in the classroom.

Democratic Rep. Anna Eskamani of Orange pressed Harding on whether children with LGBT parents would not be allowed to discuss their families in class and whether discussions surrounding current events such as the Pulse nightclub shooting in Orlando would be banned.

“If we are clarifying every conversation a teacher can have with a student, that would be a considerable undertaking,” she said, according to WFLA.

Harding was clear that the bill would not prohibit such organic discussions of current and historical events related to gender identity or sexuality, but would specifically cover “situations where a teacher is encouraging or initiating conversations through a procedure the school is doing.”

He also noted the legislation is aimed at barring “specific curriculum or coursework that puts” children in the situation where LGBT issues might be discussed, in which case parents should be alerted.

The bill comes as parents, activists and lawmakers across the country have raised concerns about the graphic nature of curricula offered to children as young as elementary grades and district and state policies that allow school administrators to keep a child’s purported gender identity from his or her parents.

“Get the parents involved when you make a change to how the student is treated,” Harding said.

WFLA reported that such changes would include those relating to “the student’s services or monitoring related to the student’s mental, emotional, or physical health or well-being and the school’s ability to provide a safe and supportive learning environment for the student.”

In a nod to oft-cited data on LGBT youth suicide rates typically used to argue for gender and sexuality education in schools, the bill even includes a provision that requires school administrators to withhold a child’s expressed gender or sexual identity in cases where “a reasonably prudent person would believe that such disclosure” could subject the student to harm, neglect or abandonment.

I have to say, as someone who has been following recent trends in public school sexuality education, this is an incredibly solid bill.

The left doesn’t like it, but lawmakers managed to nail exactly what needs to end in public schools and exactly what is still fair to reasonably expect out of those tasked with educating young Floridians when it comes to issues of sexuality and gender identity.

This makes me wanna throw up

I don’t think I can state strongly enough what an inspiring piece of legislation this is, nor how perfectly timed it is for our nation.

Take note, other states — after the last two years of heightened public awareness of the radical agenda that has been subtly influencing our nation’s public school system, this is just the kind of bill that could likely electrify the voting public.

Since 2020, regular, everyday Americans who were suddenly tasked with overseeing shoddily functioning “distance learning” as the world collectively freaked out about a deadly virus have woken up to terms such as “critical race theory” and “comprehensive sexuality education” and have been displeased to do so in the context of their children’s public school education.

They’ve had to find out the hard way there are pornographic novels in the school library and their children are being taught, in the name of “equity,” that the American legal system is inherently racist.

Or, in the case of one horrified California mom, they’ve allegedly discovered teachers have been coaching their children through gender transitions without their knowledge.

Meanwhile, when they started showing up at school board meetings to protest policies forcing their children to cover their faces or socially distance from their peers at school or allowing students to choose which bathroom they’d like to use at their own discretion, they were slandered as domestic terrorists by national organizations and the Biden administration.

Look at what happened in Virginia when Democratic gubernatorial candidate Terry McAuliffe told parents that they didn’t have the right to decide what goes on at their children’s schools.

American parents are sick and tired of being told that they don’t have a right to raise questions about just how far public schools should be allowed to go in the way of shaping their children’s worldviews, and you don’t have to be a die-hard Trumper or staunch social conservative to believe that kids should be kids and should not be exposed to highly sensitive and mature topics such as sexuality and gender identity when they’re far too young.

Legislation like this has a good chance of piquing the interest of a broad range of voters — and making an important step toward restoring our public school systems to institutions aimed at simply educating, rather than indoctrinating, the next generation of voters.

Continue reading: FL Republicans Draft Ingenious Bill to Chase Gender Indoctrination Out of Schools – Other States Should Copy It ...

Why does the homosexual agenda use pornography to support their position? All that does is isolate those minds they are trying to change.