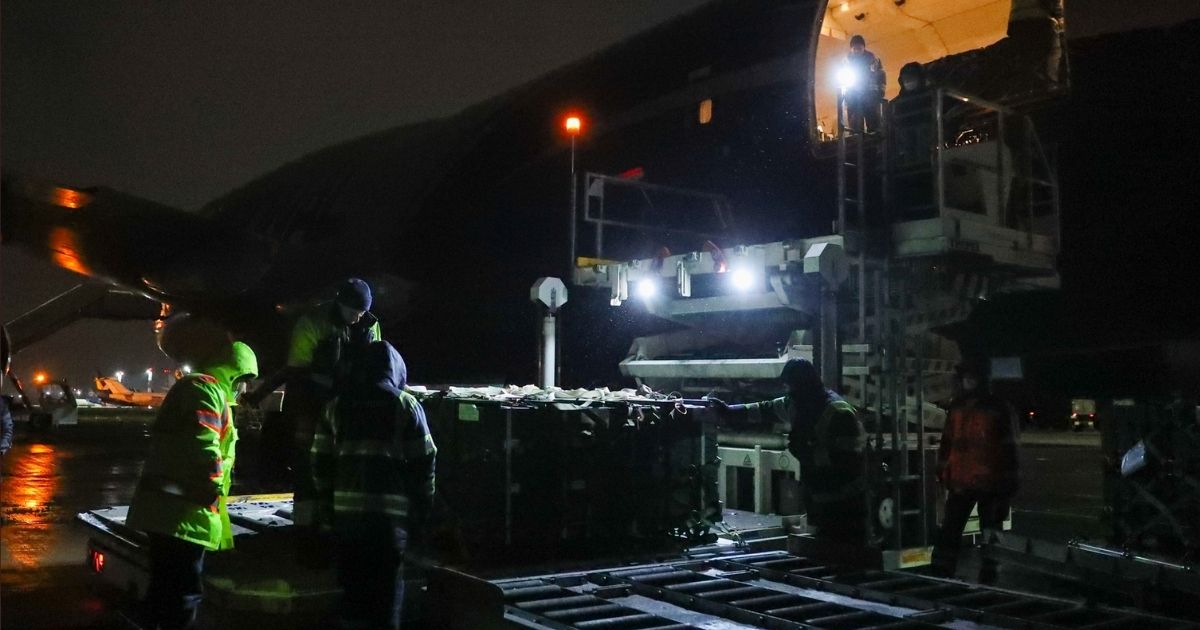 The following article, First US Shipment Arrives in Ukraine, 100 Tons of Lethal Military Aid Intended as Bulwark Against Russia, was first published on Flag And Cross.

American bullets arrived in Ukraine on Friday as Russia moved fighter jets into Belarus, to the north of Ukraine.

The ammunition and other supplies that arrived as part of a 100-ton shipment marked the first part of about $200 million in aid that the U.S. has pledged to Ukraine as it stares down the barrel of a potential Russian invasion, according to Reuters.

The shipment – and $2.7 billion USD since 2014 – demonstrates U.S. commitment to helping Ukraine bolster its defenses in the face of growing Russian aggression.

The Pentagon fears that Kyiv, the Ukrainian capital, is “now in the crosshairs,” Fox quoted an official as saying.

On Saturday, Fox reported that the State Department ordered families of U.S. Embassy personnel in Ukraine to start fleeing the country.

The United States and its allies and partners are standing together to expedite security assistance to Ukraine. We are utilizing all available security cooperation tools to help Ukraine bolster its defenses in the face of Russian aggression.

Other Americans in Ukraine will be encouraged to start leaving Ukraine next week on commercial flights, “while those are still available,” one official said.

“If Russia wants to begin to convince the world that it has no aggressive intent toward Ukraine, a very good place to start would be de-escalating,” Secretary of State Antony Blinken said Friday, according to Bloomberg.

Russia has more than 100,000 troops on three sides of Ukraine, which many expect is a prelude to an invasion.

Amid the buildup, Russian leader Vladimir Putin has demanded that Western nations agree that Ukraine can never join the North Atlantic Treaty Organization and that NATO move back forces to pre-1997 positions. The U.S. and NATO have turned down those terms.

Baltic nations that emerged from under the thumb of the former Soviet Union have said they will stand by Ukraine, according to NBC.

Defense ministers of Estonia, Latvia and Lithuania said Friday they will send anti-tank and anti-aircraft missiles, purchased from the U.S., to Ukraine.

British Defense Secretary Ben Wallace said Monday that a “small number” of British personnel would be set to assist the Ukrainian military, according to The Washington Post.

At a news conference on Wednesday, President Joe Biden said Russia would be slapped with tough sanctions if it invades Ukraine and the U.S. response “depends on what [Putin] does,” according to The Washington Post.

Biden said there are degrees of responses.

“It’s one thing if it’s a minor incursion and then we end up having a fight about what to do and not do, et cetera,” Biden explained.

“But if they actually do what they’re capable of doing … it is going to be a disaster for Russia if they further degrade and invade Ukraine.”