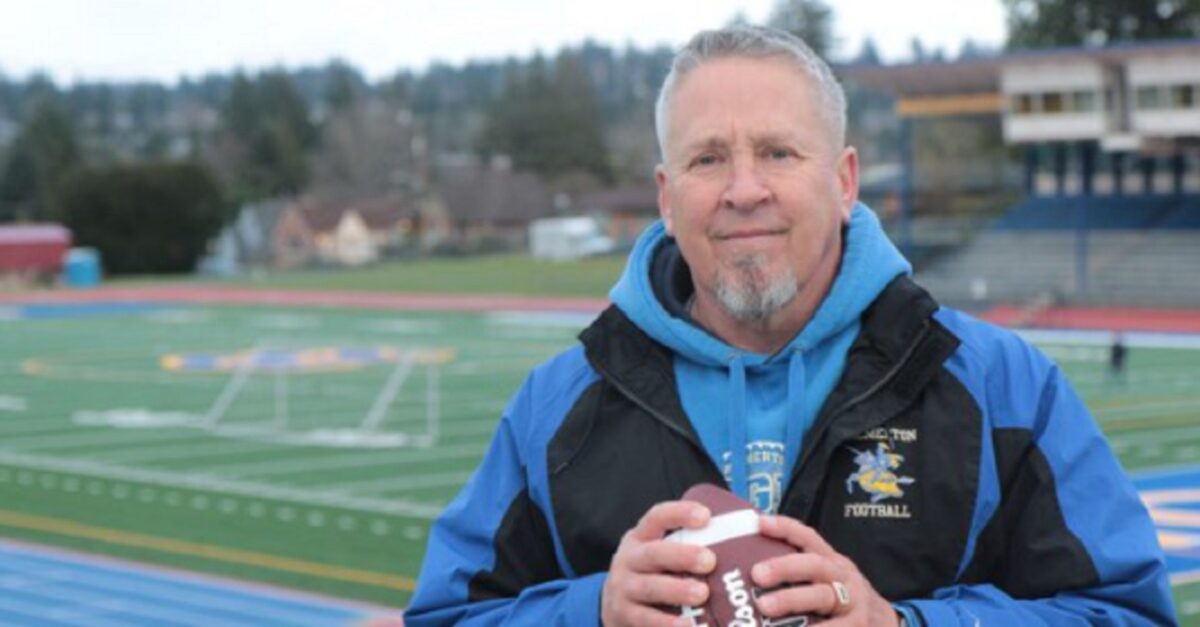 The following article, HS Football Coach Fired for His Post-Game Prayers Will Have His Case Heard by the Supreme Court, was first published on Flag And Cross.

It’s not a touchdown – at least not yet – but it is forward progress.

The U.S. Supreme Court announced on Friday it will hear the case of a former assistant football coach in Bremerton, Washington, who was removed from his job because he refused to stop praying on the field.

Joe Kennedy, a devout Christian who coached at Bremerton High School, started kneeling and offering silent or quiet prayers that evolved into him giving motivational speeches to players that frequently included religious content and prayer.

After a game in October 2015, Kennedy knelt on the 50-yard line. He was then surrounded by other coaches and players, as well as spectators who came onto the field from the stands.

A week later, after again praying on the field, he was placed on leave. The Bremerton School District did not re-hire him for the following season.

Kennedy sued. What followed was a series of lower court decisions that sided with the school district.

In 2016, a U.S. District Court judge in Tacoma declined to issue a preliminary injunction requested by Kennedy asking the court to have the school district re-hire him immediately.

In 2017, the Ninth Circuit ruled that Kennedy was not entitled to immediately get his job back because he took advantage of his position when he prayed on the field after games.

In 2019, Supreme Court declined to review the case in which the court’s conservative wing made its concerns known.

Justice Samuel Alito wrote in a concurring opinion joined by Justices Clarence Thomas, Neil Gorsuch and Brett Kavanaugh that “the Ninth Circuit’s understanding of free speech rights of public school teachers is troubling and may justify review in the future.”

We are appealing to the Supreme Court!
The fight has been long, but we are hopeful the Supreme Court will right the wrongs. How long have you been following Coach Joe Kennedy’s story?https://t.co/7FEd9x11OQ

On Friday, the Supreme Court announced it would hear the case, according to The Hill.

“No teacher or coach should lose their job for simply expressing their faith while in public,” said Kelly Shackelford, the head of First Liberty Institute, which is representing Kennedy, in a Friday statement after the nation’s highest court agreed to hear the case.

“By taking this important case, the Supreme Court can protect the right of every American to engage in private religious expression, including praying in public, without fear of punishment.”

Rachel Laser, president and CEO of Americans United for Separation of Church and State, which represents the school district, was less enthused about the Supreme Court taking the case.

She said the district had followed the law, characterizing Kennedy’s actions as “coercive prayers.”

“This case is not about a school employee praying silently during a private religious devotion,” she said in a Friday news release. “Rather, this case is about protecting impressionable students who felt pressured by their coach to participate repeatedly in public prayer, and a public school district that did right by its students and families.”

The First Amendment to the Constitution reads, in part, “Congress shall make no law respecting an establishment of religion, or prohibiting the free exercise thereof.”

The case is expected to be argued in spring, with a ruling to follow in June, NBC News reported.

Continue reading: HS Football Coach Fired for His Post-Game Prayers Will Have His Case Heard by the Supreme Court ...