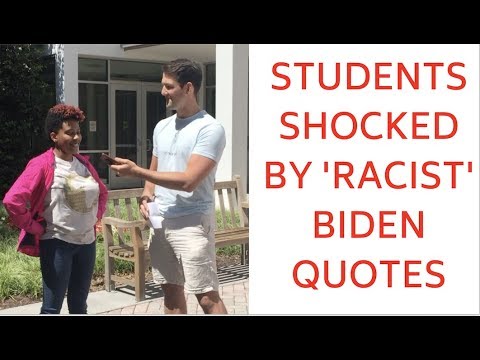 The following article, Ever Looking for Proof Biden Is a Racist? We’ve Got Decades of Evidence Right Here, was first published on Flag And Cross.

Joe Biden, contrary to popular belief, is not a racist. He’s a misanthrope, a hater of humans in general. Anyone who craves power above all else, ends up hating humanity. It’s inevitable.

Granted, Biden comes off as a racist. The historical record of his racist remarks should be enough to convince even staunch skeptics on this point. There’s decades of evidence to prove it.

Take the Latino population. In a recent attempt to explain away why American Latinos might resist COVID vaccinations, Biden said, “They’re worried that they’ll be vaccinated and deported,” The Heritage Foundation reported.

Wow. Imagine if Trump, or any prominent conservative, said as much. That statement alone would fuel mainstream media with energy to fuel a week long screed.

Maybe Biden thinks that every Latino in the U.S. is an illegal alien subject to expulsion? No. That couldn’t be it. Surely his advisors have repeatedly told him that there are more than 60 million Latinos who are also American citizens, according to a recent census.

Why stop alienating such a sizable voting block there? Biden — in his great wisdom — referred to this same segment of the population as “Latinx.” The term was invented in the woke-academy by ostensibly genderless professors who object to gender-specific words inherent in the Spanish language.

According to The Heritage Foundation, only 3% of Latinos use “Latinx” to describe themselves. Even worse — maybe — less than a quarter of Latinos have ever even heard of the word. Many Latinos are openly hostile to the term, seeing it as a bastardization of a beautiful language.

Ready to move on to Bidens racist remarks concerning blacks?

Biden, in another attempt to explain away why people are leery about taking vaccines, said that blacks may be afraid of the COVID vaccine because of historically shameful incidents where they were subject to unethical medical experiments.

“They are used to being experimented on—the Tuskegee Airmen and others,” Biden said. He might have gotten some traction here if the statement was historically accurate. Biden confused the Tuskegee Airmen — legendary World War II fighter pilots — with the infamous governmental study of syphilis among black men, the Tuskegee Experiment.

BIDEN: “It’s awful hard as well to get Latinx vaccinated… Why? They’re worried they’ll be vaccinated and deported.” pic.twitter.com/gt2mcuAGB2

These examples come from one press conference. There’s more, a lot more, that fall like sand through the hourglass into days gone past.

In 1977, Biden said that forced busing to desegregate schools would cause his children to “grow up in a racial jungle.”

In 2007, he referred to Barack Obama as “the first mainstream African-American who is articulate and bright and clean.”

Biden also had some things to say about other races. In 2006, he claimed, “You cannot go to a 7-Eleven or a Dunkin’ Donuts unless you have a slight Indian accent.”

Who have we included in Biden’s racist remarks so far? After all, inclusion is one of the big three in the leftist’s ironically titled Equity, Diversity and Inclusion campaign. So far we have, Latinos, blacks, and East Indians. What about Asians?

Biden claimed Trump was wrong in holding China accountable for the coronavirus. Why?  Because Americans can’t distinguish “between a South Korean and someone from Beijing.”

Biden says Trump is wrong to hold China accountable for coronavirus because Americans can’t distinguish “between a South Korean and someone from Beijing.”

The patronizing view of voters aside, not sure what that has to do with the CCP, or anything. pic.twitter.com/hWUbIRK910

I’m not quite sure who this insult is aimed at, Asians or Americans — probably both if Biden’s pattern is holds true. Are Americans supposed to be able to distinguish people from, say, Belarus from people of Ukraine? Is the broad term “Asian” to be reduced to national boundaries? I wonder if a Latino from Guatemala is supposed to be distinguished from a Latinx from Uruguay?

While we’re at it, let’s take a brief look at Biden’s attitude towards whites, a generalized racial grouping that, presumably, Biden inhabits. (Forgive me, but I can’t tell at first glance an Irishman from a Scot.) The Biden administration’s infrastructure bill is chock-full of anti-white racism. As one example, the $1.2 trillion bill seeks to insert CRT’s anti-white racism into multiple taxpayer-funded programs.

In another example, a disabled Wisconsin farmer sued the federal government after he was deemed ineligible for a loan forgiveness program because he happened to be white.

The list goes on and on and on. Remember, however, I’m not out to prove that Joe Biden is a racist. The evidence, accumulated over decades, speaks for itself. I’m trying to figure out why Joe’s so full of hatred towards his fellow man.

But, then again, who knows what goes on in the hearts of the leftists like Joe Biden? Who do they really hate?

Apparently they hate everybody. There’s is an ideology of misanthropes. It is no secret that progressives will go to any length to get what they want. They’re consumed by a craving for power. They’re blinded by it to the point they can no longer distinguish between black, white, yellow or brown.  This kind of craving — power of the sake of power — comes at a steep price. To claim it one must sacrifice reason and faith on the altar of hatred.

The Martin Luther King Jr. holiday is on the doorstep.

MLK’s legacy teaches that the only reasonable way forward is to dream of a day that each human being is judged by their character and not reduced to the color of one’s skin, economic status or any other form of reductionism.

To have faith in humanity one must have faith that every individual is more than his or her circumstance. Each life is sacred. To be sacred is to be part of the whole. The whole is irreducible to individual accidents of skin color, gender, sexual preference or whatever other category the left weaponizes next.

Strong character through a blend of human reason and faith in God. That it is the Western tradition. It is within in this tradition we can find a sure cure for hate.

Continue reading: Ever Looking for Proof Biden Is a Racist? We’ve Got Decades of Evidence Right Here ...