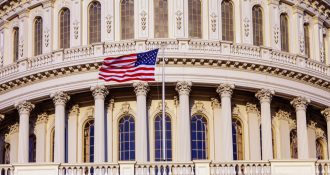 Hypocrite Senate Democrats paused their drive to end the filibuster long enough to use the filibuster to help Russia’s Vladimir Putin corner the natural gas market in Europe last week.

The Democrats used the filibuster to block a bill sponsored by Republican Texas Sen. Ted Cruz that would have put sanctions on Russia’s Nord Stream 2 pipeline in Germany. The bill needed 60 votes to pass, but the Democrats held it to only 55.

Biden had pushed to allow Nord Stream to continue operations after Donald Trump worked to block the Russian energy project. The pipeline would give Putin control of much of the natural gas used by Europe. This is what Democrats are working to facilitate and what Trump wanted to head off.

There is much hypocrisy here.

But Trump sanctions on Russia stopped the opening of the Nord Stream 2 Russian pipeline.

Yesterday, the same Democrats voted to NOT put new sanctions on Russia.

And the media?! They didn’t notice.

This by the way, is a concrete example of how Democrats' Trump-Russia paranoia was entirely performative.

Trump admin didn't support the pipeline on grounds that it would economically empower Putin. Biden immediately reversed on the issue and a lotta Dems apparently support it. https://t.co/11uk7uCvHh

.@tedcruz's bill to punish Russia and help Ukraine was defeated by the Russiagate party with only 45 votes thanks to the terrible, very bad, no good filibuster. https://t.co/5LBGAhrDEA

Donald Trump Jr. had it exactly right on the hypocrisy.

“They want to eliminate it. That’s not because of all of the soundbites and on all of the nonsense. It’s because they’ve done such a disastrous job. America is on to their nonsense. They’re not going to let them get away with it again. So again, now they’ve got to change the rules to make it possible for them to win,” he said.