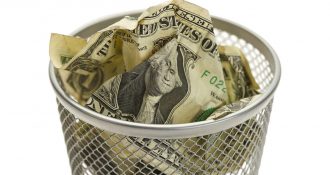 The following article, Bidenflation Ruined Christmas as December Sales Crashed as Prices Rose and Shortages Loomed, was first published on .

Joe Biden became the Grinch that stole Christmas as retail sales cratered in December and shortages grew thanks to supply chain issues.

December’s dismal numbers piled on top of the last six months of data shows that Biden’s economy is continuing to tumble, despite the claims of economic success by the White House.

The results were far worse than analysts expected. The median estimate by analysts was for sales to be flat to down just one-tenth of a percentage point.

Retail sales were better than expected in September and October, suggesting that concerns about inflation and shortages of goods may have pulled some shopping forward. Sales rose 0.8 percent in September and 1.7 percent in October. In an inflationary environment, making purchases early can help avoid higher prices later.

November was revised down from a 0.3 percent gain to 0.2 percent gain. The Consumer Price Index jumped 0.8 percent in November, following an increase of 0.9 percent in October. This suggests that inflation-adjusted sales actually declined on a month-over-month basis in November.

Biden’s job numbers have also been cratering. Last week, Biden’s jobs numbers came in at half the expectations, an astonishingly low number that no other president has suffered in modern history.