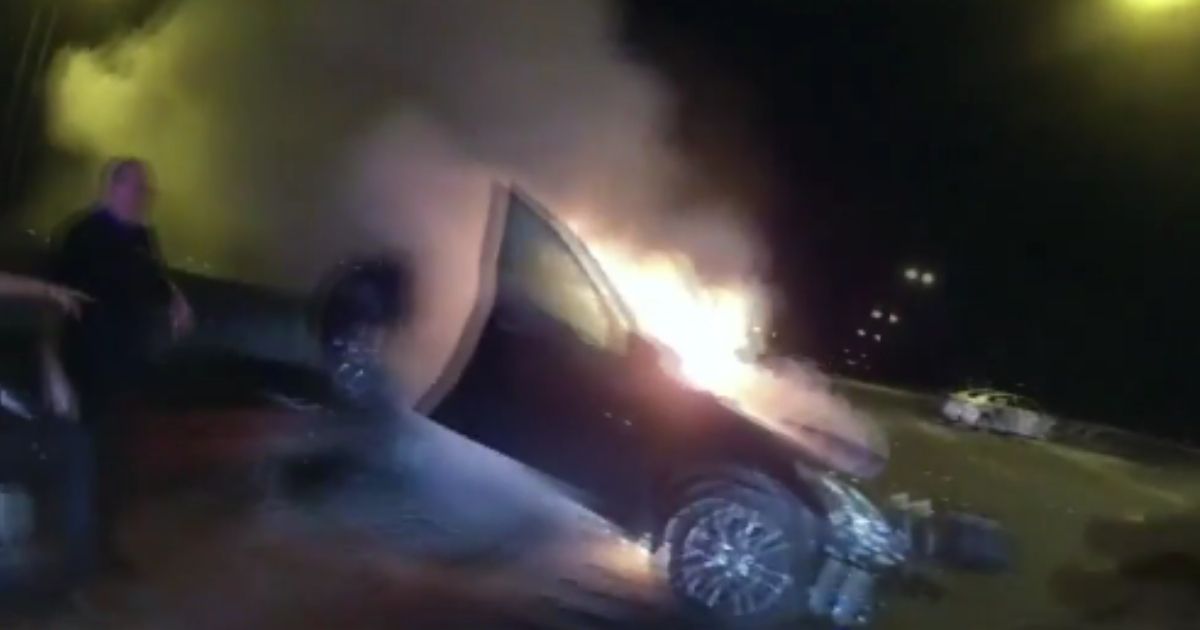 The following article, Caught on Tape: Florida Police Scramble to Rescue Woman from Burning Car, was first published on Flag And Cross.

Shortly after midnight on Dec. 29, Pasco Sheriff’s deputies responded to a chaotic scene on the state Route 52 overpass in Land O’ Lakes, Florida.

A car traveling in the wrong direction had collided head-on with another car, leaving the wrong-way driver, 30-year-old Ricca Soto, trapped in a burning wreck.

There were good Samaritans around when the authorities arrived. Smoke was billowing off of the car, and the fire consuming the front of the vehicle quickly spread to the inside of the car.

Richard Brewster, one of the witnesses of the crash, had immediately done his best to rescue Soto from her car, but was unable to.

“As we were coming up the embankment all you see was just the implosion of all the steam, sparks, lights,” Brewster told WFLA. “I immediately ran over there and checked to see if she had a pulse.

“Everybody was like, ‘It’s on fire, back up, start moving,’ and I’m like, ‘No, she’s in here, come help me.’ It seemed like I ran around that car a million times trying to get her out, and then the other lady was on the phone with 911.

“The first officer showed up, and he come running up, and he asked was somebody in there. I said, ‘Yeah, but I can’t get her out.'”

On Jan. 7, the Pasco County Sheriff’s Office shared the bodycam of one officer, showing the terrifying situation and just how close to death the driver had been.

“FIERY RESCUE: (Language Warning) PSO deputies are never sure what each shift will bring,” they wrote on their Facebook post. “District 1 deputies found themselves on the Suncoast Parkway on the SR 52 overpass on Dec. 29 just after midnight, responding to a car crash.

“A driver was trapped inside a car on fire and partially over a guardrail. Deputies arrived before Pasco Fire Rescue and used three fire extinguishers to attempt to put out the fire, but the flames came back each time and got closer to the trapped driver.

“Deputies eventually bent the badly damaged driver’s side door down enough to pull the driver to safety.

“We share video of this rescue to show the dangers our deputies face each shift. We’re proud of their selfless efforts to ensure the driver made it out of the car alive.”

Soto was taken to Bayonet Point Hospital, and, according to WTVT, she was in stable condition. Her stepdaughter, Elizabeth Soto, later confirmed that her stepmother was still in the hospital as of Jan. 7.

“As soon as they got her out and away from the car, it literally went up, was engulfed in flames,” Brewster said, according to WFLA. “It was seconds.”

Authorities are investigating the cause of the crash and whether or not there was any sort of impairment in play. The other driver was also injured.

While it was certainly a rescue no one will forget, it was just another day for the responding deputies.

“They go from mental health calls to domestic violence to a car crash on the Suncoast where they’re fighting a fire,” Pasco County Sheriff’s Office spokeswoman Amanda Hunter said. “It’s just something our deputies see every day.”