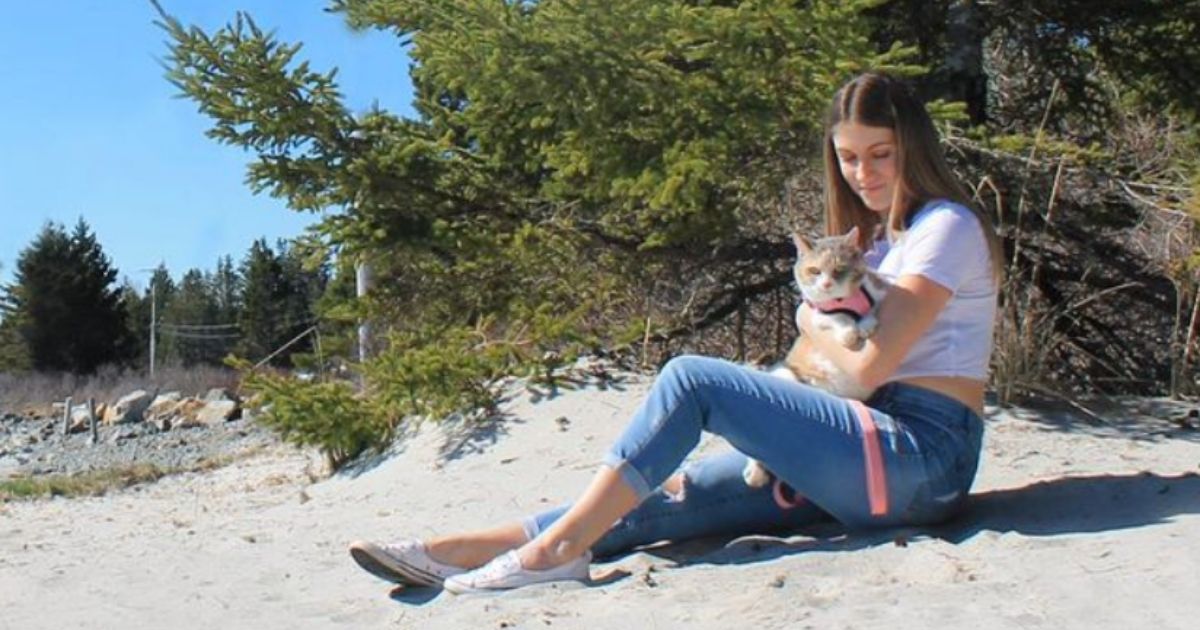 The following article, Woman Begins New Nonprofit to Aid Pets Whose Owners Are Near the End of Life, was first published on Flag And Cross.

One of the things that weigh heavily on the minds of the elderly and terminally ill is the well-being of their beloved animals after they pass.

There are many programs for adoptable animals, as well as fostering opportunities, but there is a dearth of programs for seniors and others who want to ensure their pet’s care after their death.

Angela Rafuse of Halifax, Nova Scotia, experienced this problem firsthand when her grandfather, Byron Rafuse, refused to go to the hospital for a health matter because he was concerned about who would care for his late wife’s cat.

“That cat was all he had left of my grandmother, and he didn’t want Mackenize to end up in a shelter,” Angela, 27, told People.

When her grandfather eventually passed away, Angela took in Mackenzie. The relationship was fragile, as the sassy feline wasn’t exactly enamored of Angela.

“I can remember her hissing at me when she was just a kitten, but we couldn’t let her go to a shelter,” Angela said. “It would have broken my dad and my grandpa’s hearts.”

At some point, Angela shared a video of her attempting to bond with Mackenzie and getting batted in the face for her efforts. The TikTok video went viral — but people also started asking about the cat’s story.

As Angela told how she’d taken the cat in after her grandparents‘ passing, she started to get many stories in response about people whose family members had passed away and whose animals had been taken to shelters.

That piqued Angela’s curiosity, and she started to look into the issue.

“So I started trying to find resources for this, and I realized nothing existed for seniors to arrange homes for their pets,” she told People. “I couldn’t believe something like this didn’t exist.”

So she created a new nonprofit. Naming it “My Grandfather’s Cat” and launching it on her grandpa’s birthday (May 18) in 2021, Angela started to fill a need.

“Our first donation was for $500, and I thought it was a mistake,” she said. “We weren’t even a registered charity at that point, so I called him to make sure, and he said someone needs to be doing this.

“People apply, and we have volunteers handle each case.

“We vet everyone, but then the seniors themselves decide who is going to adopt their pet when they’re gone.”

The organization’s Facebook page states that it is a “Canadian non-profit that provides a safe space for seniors and people with terminal illnesses to arrange a second forever home for their beloved pets.”

The free service functions as a platform for potential adopters and adoptees to connect, with the intention of keeping the pet(s) with their original owners for as long as possible before being re-homed, skipping shelters entirely.

So far, Angela’s efforts have resulted in 25 cats and one dog finding new homes. She hopes to someday expand the service to the United States.

“It is the most rewarding thing in the entire world to be doing this,” she said, “and I know my grandfather would be proud.”

Continue reading: Woman Begins New Nonprofit to Aid Pets Whose Owners Are Near the End of Life ...