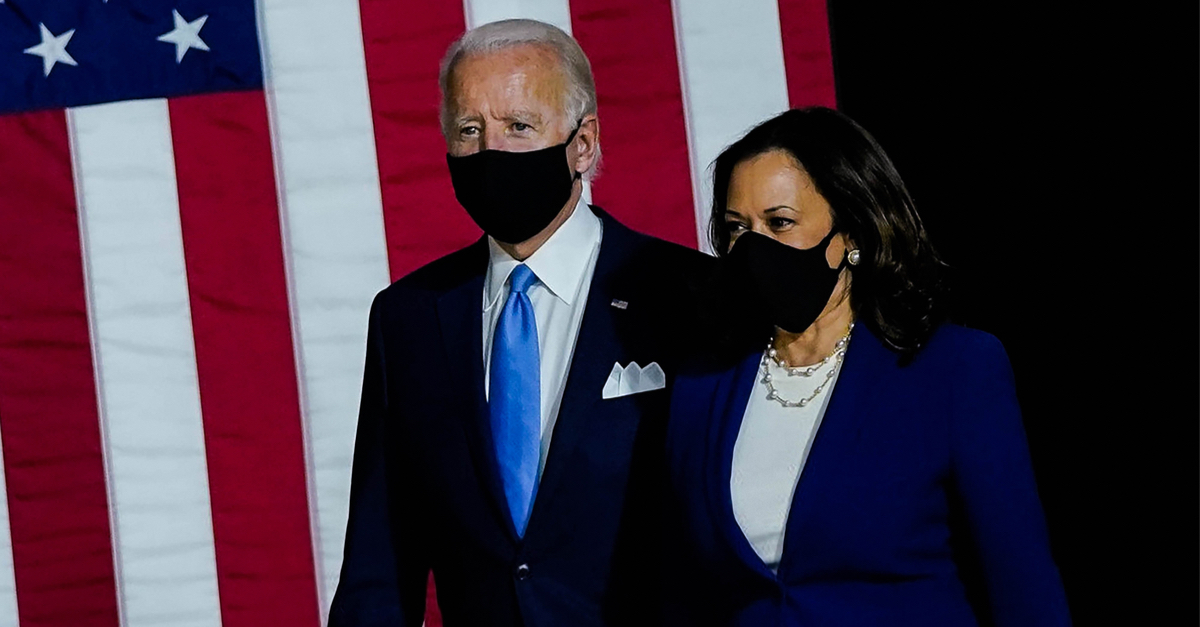 The following article, Who’s Really in Charge? During Voting Rights Speech, Biden Refers to ‘President Harris’, was first published on Flag And Cross.

When it comes to the White House pecking order, many of us have been left asking Lou Costello’s famous question: Who’s on first?

On Wednesday, President Joe Biden delivered remarks in Atlanta to push the Democrats’ stalled federal election legislation. In a move long expected, the president announced he was in favor of doing away with the filibuster.

“I believe that the threat to our democracy is so grave that we must find a way to pass these voting rights bills, debate them, vote,” Biden said, according to a White House transcript. “Let the majority prevail. And if that bare minimum is blocked, we have no option but to change the Senate rules, including getting rid of the filibuster for this.”

(Of course, Biden has vigorously defended the filibuster in the past when it’s suited his own needs, something we’ve pointed out on numerous occasions here at The Western Journal. We’ll keep making sure readers have the receipts proving the president’s hypocrisy on the matter. You can help us bring America the truth by subscribing.)

Even though the president’s filibuster flip-flop was no surprise, the speech was given some of the most extensive coverage any Biden address has garnered in quite some time — which meant he should have been extra cautious not to spill a whole lot of gaffe sauce into the soup.

“Last week, President Harris and I stood in the United States Capitol to observe one of those ‘before and after’ moments in American history: Jan. 6 insurrection on the citadel of our democracy,” Biden said.

“Today, we come to Atlanta — the cradle of civil rights — to make clear what must come after that dreadful day when a dagger was literally held at the throat of American democracy,” he said.

If you’re going to have people buy that kind of empurpled language about the Capitol riot, you have to stick the landing, as they say. This was … not that.

The White House, out of charity to its current resident, amended the official transcript of the speech to read: “Last week, [Vice] President Harris and I.” One isn’t sure whether that’s misleading or just sad, but there you go.

And yes, one understands that the president is to rhetorical eloquence what Mr. Magoo was to eyesight. However, consider the fact this wasn’t even the first time he’s called Kamala Harris the president.

Indeed Harris did graduate from one of the nation’s most prestigious HBCUs — but she has not yet graduated to the presidency, at least in matter of fact.

But calling your vice president the president could happen to anyone two times during a presidency. Or three:

Heck, we can even make it four if we count this ditty from before Biden took office:

While most of Sigmund Freud’s work is no longer considered scientifically or medically accurate, the concept of parapraxis — colloquially known as the Freudian slip, where a verbal gaffe is triggered by one’s unconscious mind — continues on as a popular theory of what motivates verbal solecisms.

A related concept is “saying the quiet part out loud,” first enumerated by the somewhat less august figure of Krusty the Clown on “The Simpsons.”

Whether or not Messrs. Freud or Clown were onto anything deeper remains an open debate, but the “President Harris” gaffes bring both concepts to mind because, well, we’re not entirely sure whether the man who’s supposed to be the president still has much of one himself.

Questioning Joe Biden’s mental clarity isn’t just Republican sniping anymore; the president’s gaffes and blunders have become so blatant and routine that journalists of all stripes openly speculate on just how present the putative leader of the free world is.

At 79, Biden insists he’s open to standing for a second term, but few seem to believe him and it remains an open question how he’ll complete his first.

For that matter, it remains an open question whether his handlers and White House allies — Kamala Harris included — are essentially completing it for him at this point.

That’s why Biden’s choice of Harris as his running mate and her dismal poll numbers as vice president have been given especial weight by the media: She’s not just the veep, she’s the heir apparent. She’s not No. 2, she’s No. 1b — and one could easily speculate that Biden’s hard turn to the left is because he expects to be handing the keys to the far more liberal Vice President Harris in the not-too-distant future.

Heck, if Freud really had parapraxis right, perhaps Biden thinks he already has.