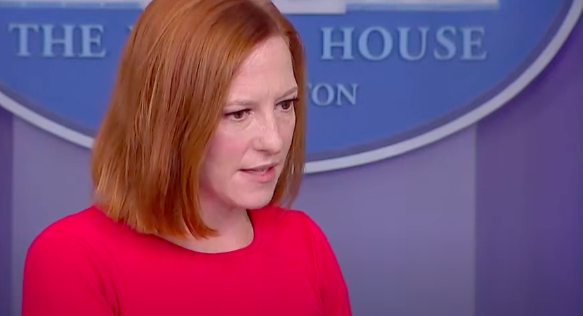 The following article, Doocy Presses Psaki on COVID ‘Misinformation,’ but She Refuses to Push Back on Sotomayor Lie, was first published on Flag And Cross.

The White House has made it clear that, as it pertains to COVID-19, “misinformation” is enemy No. 1.

In fact, President Joe Biden went so far as to say this summer that social media platforms such as Facebook were “killing people” because of COVID misinformation, particularly about vaccines.

However, we found out Monday that the White House isn’t going to push back on some obvious — and high-profile — misinformation about the pandemic, at least if it comes from an ally and the administration finds it helpful.

In a tense back-and-forth with Fox News’ Peter Doocy during her daily media briefing, White House press secretary Jen Psaki refused to comment on a wild claim by liberal Supreme Court Justice Sonia Sotomayor that the number of children in hospitals with COVID reached into the six figures.

Instead, Psaki merely said the White House was confident the high court would uphold its vaccine mandate.

Of course, we know that the only kind of so-called misinformation the White House and Big Tech are interesting in censoring is that which doesn’t constantly arouse fear and keeps the pandemic in perspective. Here at The Western Journal, we’ve felt the effect of this firsthand as Big Tech often tries to starve us of revenue if we don’t toe the line. We’re not going to comply, however — and you can help us by subscribing.

The exchange between Doocy and Psaki generated no shortage of Beltway buzz on Monday, mostly because of back-and-forths regarding the Biden administration’s testing failures and whether the president should continue using the phrase “pandemic of the unvaccinated” when so many COVID infections are breakthrough cases.

That all bears watching, but the most revealing part of the dialogue came at the end.

“You guys have been very aggressive countering COVID misinformation,” Doocy said. “So what do you guys think about COVID misinformation coming from the Supreme Court and Sonia Sotomayor’s false claim that over 100,000 children are in ‘serious condition,’ ‘many on ventilators?'”

And yes, the Obama-appointed justice said this as the court heard oral arguments over the Biden administration’s vaccine mandate.

“We have hospitals that are almost at full capacity with people severely ill on ventilators,” Sotomayor said. “We have over 100,000 children, which we’ve never had before, in serious condition, and many on ventilators.”

This is all just wildly false from Justice Sotomayor. Omicron is demonstrably *less* lethal than Delta and there are not “100K children in serious condition, with many on ventilators” in the US. Come on. pic.twitter.com/uvIUmMUwKk

Even liberal fact-checking outfit PolitiFact — which has been known to run some profoundly jesuitical “fact-checks” to face-save liberal names — wasn’t going to try in this case:

NEW: Justice Sonia Sotomayor said during oral arguments today that “we have over 100,000 children, which we’ve never had before, in serious condition, and many on ventilators” due to the coronavirus. That’s False. https://t.co/9itoVd1s1L pic.twitter.com/zX8Nf6Bx8r

As for Psaki, however, she wasn’t going to fight this particular piece of COVID misinformation.

“Well, I’m not going to speak to Supreme Court arguments or statements made in those arguments,” she said.

“But I will tell you that what is at stake here is our effort to protect health workers and, most importantly, protect patients with the [Centers for Medicare and Medicaid Services] rule and also to make workplaces safer with the [Occupational Safety and Health Administration] rule, which we have confidence in our legal argument for,” Psaki said. “So, I will leave it to them to decide. But that’s what’s being argued now.”

It’s not just Psaki, either.

Watch Fox News’ Bret Baier practically pulling teeth to get Centers for Disease Control and Prevention Director Rochelle Walensky to acknowledge the number of children in hospitals is closer to 3,500:

CDC Director Dr. Rochelle Walensky refutes Justice Sotomayor’s statement that “over 100,000 children” are hospitalized due to COVID, with “many on ventilators”:

But, again: Some vaccine misinformation is less important to counteract for the White House because it produces, not reduces, fear of the virus and obeisance to authorities and mandates.

The mental health crisis around COVID-19 is killing people, too — and part of that stems from mass panic. Yet, when a Supreme Court justice — one of the most prominent individuals in our political life — plays into this with a wildly off-base claim, Psaki is mum.

It’s not the “misinformation” that’s bothering them, in other words — and it never was.

Continue reading: Doocy Presses Psaki on COVID ‘Misinformation,’ but She Refuses to Push Back on Sotomayor Lie ...