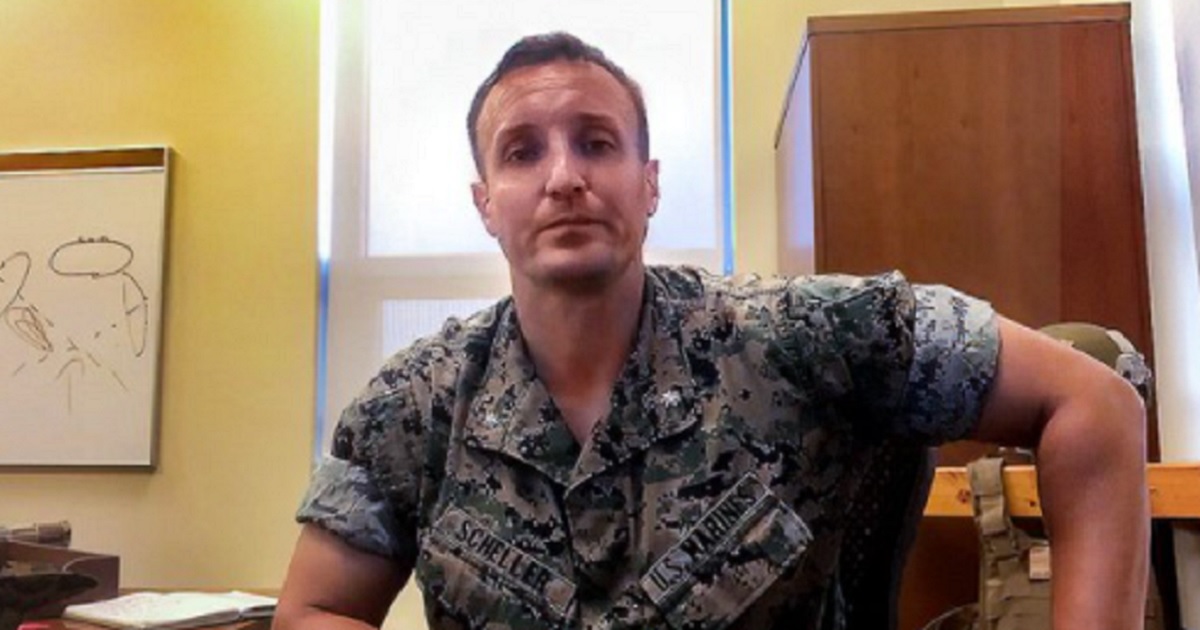 The following article, Disaster for Dems: Ex-Marine Stuart Scheller Has a ‘Plan’ to Take His Fight Into Politics, was first published on Flag And Cross.

The former Marine officer who infuriated the Biden administration with his frank talk about its abdication of military and political leadership during the final days of the withdrawal from Afghanistan is gearing up for a new battle on a very different battlefield.

Former Lt. Col. Stuart Scheller, who was court-martialed for his comments and discharged from the Marine Corps in December, has created a Votes for Vets coalition and says that if all goes well, he could be on the ballot in 2024, according to Just The News.

Scheller told the John Solomon Reports podcast on Wednesday that he lacks “the physical, mental, spiritual endurance right now to jump into a race.”

“So what I plan on doing is supporting this coalition that I built — and it’s still growing — and I’ll probably jump into a race in ’24,” he said.

What he can do is marshal his forces, which includes about 20 candidates for the House and another five for the Senate, Just The News reported. His goal is to help those who share his views win for the sake of the nation he loves.

“I am a conservative, but I think we need leaders and not politicians,” he said.

Scheller said he would “go back and do this over again” when he speaks of his August videos, but admits he would like to change a few words to avoid having his words used for someone else’s purposes.

“What has tripped me up are selective, out-of-context, little statements that people try to use to discredit my whole message,” he said.

For example, he said, he  “never mentioned Biden’s name once” and has “a lot of respect for the office of the president.”

“Biden has a lot of problems, and he’s not, in my opinion, very good,” he said, noting that the ballot box is designed to hold elected leaders accountable.

Accountability in the military is far more important to him.

The “military on the tactical level is very effective,” Scheller said. “Where we are failing wars is at the operational level and the strategic level. And that’s the general-officer-to-the-political-realm link that’s just consistently failing. And I think that starts with accountability. I think if you hold senior leaders accountable, you’d be more effective.”

He said he believes Gen. Kenneth F. McKenzie, the head of U.S. Central Command, should be held accountable for what took place in Afghanistan.

If a plan cannot be executed, “you resign, or you assume responsibility and accountability for the resources applied to you by that civilian leadership. Like there is no fourth option. There’s no, like, then the plan fails, and everyone just points at each other, and that’s that … that is not acceptable,” he said.

“I’m not saying we’ve got to be in Afghanistan forever, but I am saying: Did any of you throw your rank on the table and say ‘hey, it’s a bad idea to evacuate Bagram Airfield, a strategic airbase, before we evacuate everyone,’” he said, asking if any leader dared to admit their mistakes.

“I thought through ‘if I post this video, what might happen to me?’ especially if the video picks up traction, if I have the courage to post it. But I think what you believe in, can only be defined by what you’re willing to risk. So if I’m willing to risk my current battalion commander seat, my retirement, my family’s stability to say some of the things I want to say. I think it gives me some moral high ground to demand the same honesty, integrity, accountability from my senior leaders,” he said.

A later Facebook post further touched on his reasons for speaking out, knowing that punishment awaited him.

“[W]hy is the Republic in decline? The Apathetic American convinces himself to apply pressure in other ways only because he can’t see the invisible chains. The keyholders refuse to take accountability when it is so obvious. They are unable or unwilling to do what is right. But WE are not like the Apathetic American. WE have faith. WE believe what you stand for can only be defined by what you’re willing to risk,” he wrote.

“They need US scared. They need US silenced. They need US divided. Fear, division, and ignorance facilitates control. WE the people are not republican/democrat, black/white, straight/gay, christian/atheist, mask/nomask, police/community, wallstreet/mainstreet… so on and so on. We are Americans. Adjectives are not required. Don’t dim your light to walk into their darkness. Walk into their darkness and light s— up,” he wrote then.

Continue reading: Disaster for Dems: Ex-Marine Stuart Scheller Has a ‘Plan’ to Take His Fight Into Politics ...