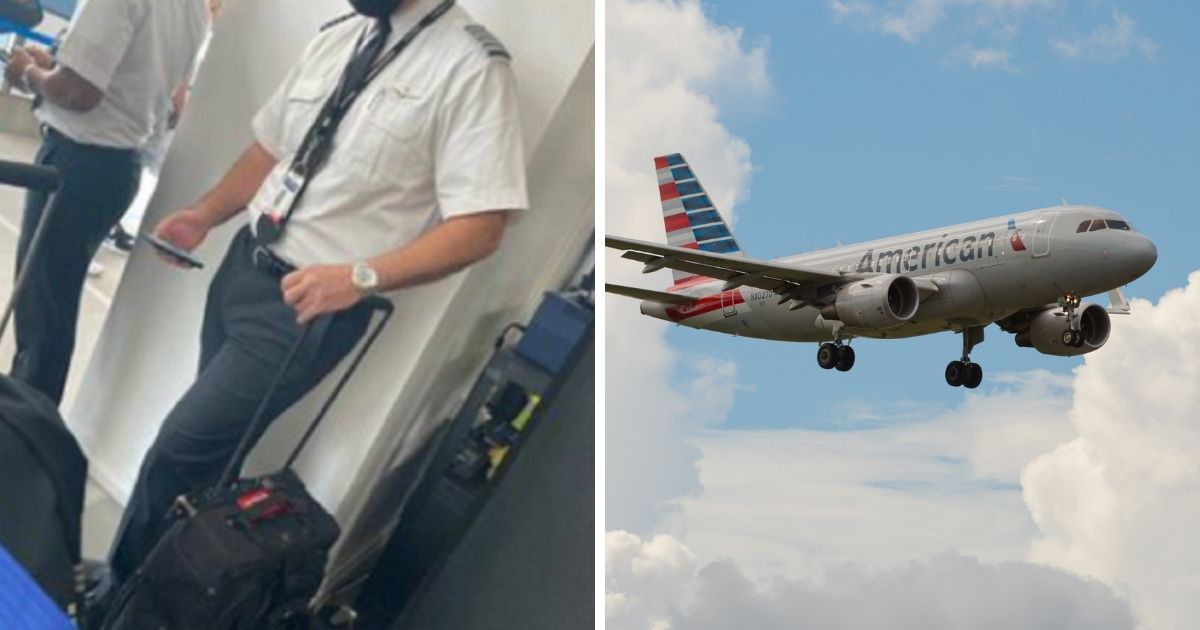 The following article, American Airlines Blasted for ‘Hypocrisy’ Over Response to Pilot’s ‘Let’s Go Brandon’ Patch, was first published on Flag And Cross.

That’s the message from a controversy that arose over the weekend when an American Airlines passenger noticed a “Let’s Go Brandon” patch on a piece of luggage belonging to one of the pilots, according to Fox News.

When the passenger complained to corporate headquarters about the patch, there was nothing “American” about the response.

The complaining passenger was flying from Saint Lucia in the eastern Caribbean to Miami when she saw the patch, which carried a slogan that’s become a kind of open code for bashing President Joe Biden, the U.K. Daily Mail reported.

She complained to the airline via Twitter, getting what can only be described as a cowardly response that infuriated conservatives.

So this raging feminist was triggered by a pilot’s “Let’s Go Brandon” luggage tag.

American Airlines has announced an investigation.

”hey, @AmericanAir –  y’all cool with your pilots displaying this kind of cowardly rhetoric on their luggage when they’re in uniform, about to fly a plane?” wrote the user, identified on Twitter as Dana Finley Morrison. “we are not the only passengers who noticed and were disgusted.”

Morrison has since made her tweets private, but according to her account bio, she’s a “Sorority & Fraternity Professional • @COMatBU and @IU_HESA Alumna • Passionate about reality TV, feminism, and doing the right thing.”

(If there’s a better snapshop of modern Democrats than a “sorority and fraternity professional” who is passionate about reality TV and feminism, it would be hard to find. She didn’t even have to say she was interested in “doing the right thing.” How could it be otherwise?)

Whatever level of disgust this passenger and her fellow travelers might have felt, it was nothing compared to the contempt that arose on social media after American Airlines responded — first to ask for more details, then to promise that the matter would be subjected to “internal review.”

“We take this very seriously and have sent this over to crew leadership. They will handle this internally after review,” the airline wrote, according to a screen shot of direct messages posted by Fox News. “We assure you appropriate internal review will occur.”

That sounds ominous — for the employee involved and for Americans who think a company called “American” might actually have a healthy American respect for the freedom of speech.

After all, as CBS News reported, the Fort Worth, Texas-based airline in 2020 decided its employees would be allowed to wear a “Black Lives Matter” pin — an undeniably political statement that’s as polarizing as any “Let’s Go Brandon” patch ever could be.

The “Let’s Go Brandon” slogan signifies an intense dislike of the current president — an American emotion and political position going back at least to John Adams and, probably, George Washington himself (even if no one wanted to admit it).

“Black Lives Matter,” on the other hand, whatever the meaning of its individual words, is the expression of a fundamentally Marxist philosophy that does not acknowledge the basic ideals of the United States — individual rights, property rights, equality under the law. The Black Lives Matter organizers themselves admit their political orientation.

But it’s not just political philosophies at play. By September 2020, the United States had seen a full summer of rioting by Black Lives Matter mobs and their allies among the antifa thugs. The image of cities in flames, statues toppling and hatred toward police officers were fresh in the minds of the American public — including the American flying public.

It’s doubtful that a “Black Lives Matter” pin on the uniform of anyone with the potential to assume responsibility for the lives of hundreds of innocent passengers made anyone feel confident, except for the most delusional of sympathizing liberals.

Yet American Airlines feels the obligation to assure a passenger complaining about a “Let’s Go Brandon” patch that the incident is being taken “very seriously”?

But conservatives on social media were not happy with the company.

The Florida tie-in of the Miami-bound flight provided a natural tie-in for Christina Pushaw, the indefatigable spokeswoman for Florida Gov. Ron DeSantis (after former President Donald Trump, probably the second most hated figure by the left today).

Pushaw suggested the Biden administration’s hugely unpopular vaccine mandates — which directly affect airline employees — might have been a factor in the controversial patch.

“This pilot deserves a raise for dealing with entitled Karens while doing his job,” Pushaw wrote to American. “Don’t fire your pilots for being conservative or criticizing Biden. We won’t have any pilots left.”

This pilot deserves a raise for dealing with entitled Karens while doing his job.

Don’t fire your pilots for being conservative or criticizing Biden. We won’t have any pilots left. As if the thousands of flight cancellations aren’t enough already. @AmericanAir do the right thing. https://t.co/OW1kS1KdV5

Other sane voices on social media joined in.

Hypocrisy at its best: American Airlines designs a special BLM patch for employees to wear, but attacks a pilot for an Anti-Biden sticker.https://t.co/CqAlCyHQv1

Dear @AmericanAir: I’m a lifetime platinum member and defend the right of this pilot to tag his own luggage, just as unionized workers and left-wing employees have done. https://t.co/YnX70hS6pb

I would feel extra safe on this plane. Give the pilot a raise.

@danacfinley Good thing none of your “American” jets were parked on the streets of any of these “American” cities that were ravaged by BLM in 2020. Now American Airlines is allowing BLM pins on personnel. Cities burned by LGB = 0. Your SnowFlake arguments & are kindergarten like. pic.twitter.com/JMzjVseZmf

That last one nails it.

Whatever the group’s slavish support in the mainstream media, Biden’s leftist administration and the naturally spineless state of corporate America when confronted by the left, the Black Lives Matter movement has established itself as a fundamentally violent opponent of the United States system of law.

An no matter how hard Nancy Pelosi and her partisan colleagues want to dress up the Jan. 6 Capitol incursion, it was nothing like the scourge of violence leftists under the banner of Black Lives Matter were making their calling card since at least 2014, long before Trump was even a candidate for the Republican presidential nomination.

And it’s already losing support as Americans see what it’s really all about.

A corporation like American Airlines is willing to facilitate employees openly espousing their affiliation with one group yet has placed a similar situation under “internal review,” with the clear intimation that disciplinary procedures against the offending employee could be in the offing.

It’s supposed to be an American airline, but apparently, only left-wing politics count.