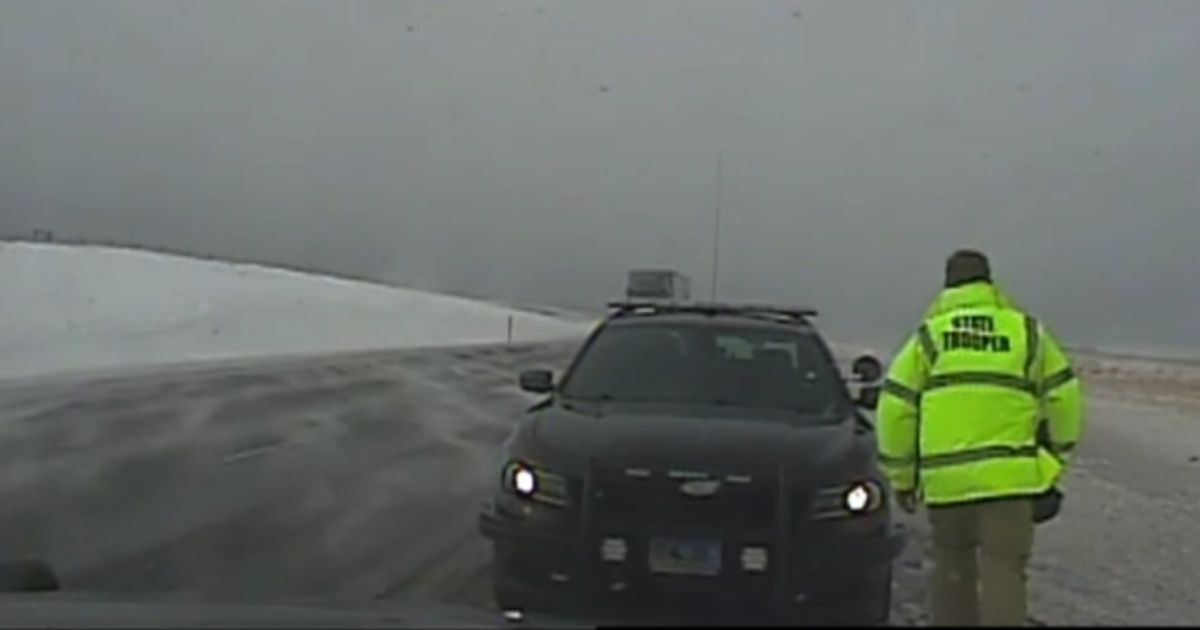 The following article, Watch: Video Catches Officer’s Escape Moments Before Getting Crushed by SUV, was first published on Flag And Cross.

No matter the time of year, it’s important to keep your eyes on the road and remain aware of any potential hazards or stopped vehicles.

Too many times, distracted or too-interested drivers passing the site of a crash have caused further death or injury to the people involved.

When a car is speeding toward you, there’s little you can do to avoid the inevitable, but you can certainly try to scramble — and sometimes pure instinct kicks in.

In a video recently released by the Wyoming Highway Patrol, a state trooper helping with a crash was nearly mowed down by an out-of-control SUV that barreled past.

The conditions were already dicey, being windy and cold. As the trooper headed toward his car, he checked over his shoulder.

In the distance, a semi-truck approached in the farthest lane. When the trooper approached his vehicle, he suddenly darted toward the embankment, but then slipped and threw himself back toward the road.

A white SUV blew past, driving onto the snow-covered grass and sending up a plume of snow and debris, which hit the trooper and his vehicle.

The vehicle with the dash camera started backing up as soon as the driver saw the oncoming car, but still managed to record the entire heart-stopping scene.

Thankfully no one was reported injured, and the oncoming car managed to pull off the road in time to avoid the parked police car, but it was still an incredibly close call.

“Conditions continue to deteriorate quickly across Wyoming,” the WHP shared on Facebook on Wednesday. “Interstate 80 and 25 are closed in several areas. Visibility is poor, and road surfaces are slick.”

“One of our troopers recorded this video while working a crash on the Interstate. Please slow down, use caution, and plan ahead.”

Some commenters wrote to ask if the trooper’s car had any warning lights on, as the front of the car did not appear to.

“They were on in the back,” the highway patrol responded on the post. “Our Troopers have the ability to turn their lights on to the back only.”

One person commented to say they’d been driving behind the SUV and saw what happened.

“[W]e were driving 45 the white car was driving too fast and he panicked when he saw the trooper on the side of the road and that’s what caused him to slide out it happened right in front of me less than 10 ft,” Christopher Verdine wrote.

Sergeant Jeremy Beck told KCNC-TV that the trooper is fine and the driver of the SUV was not injured. The SUV was pulled back onto the roadway.

Beck is using the opportunity to remind people to remain alert and aware, wear a seatbelt, check their speed in less-than-ideal driving situations and be aware of stopped vehicles.