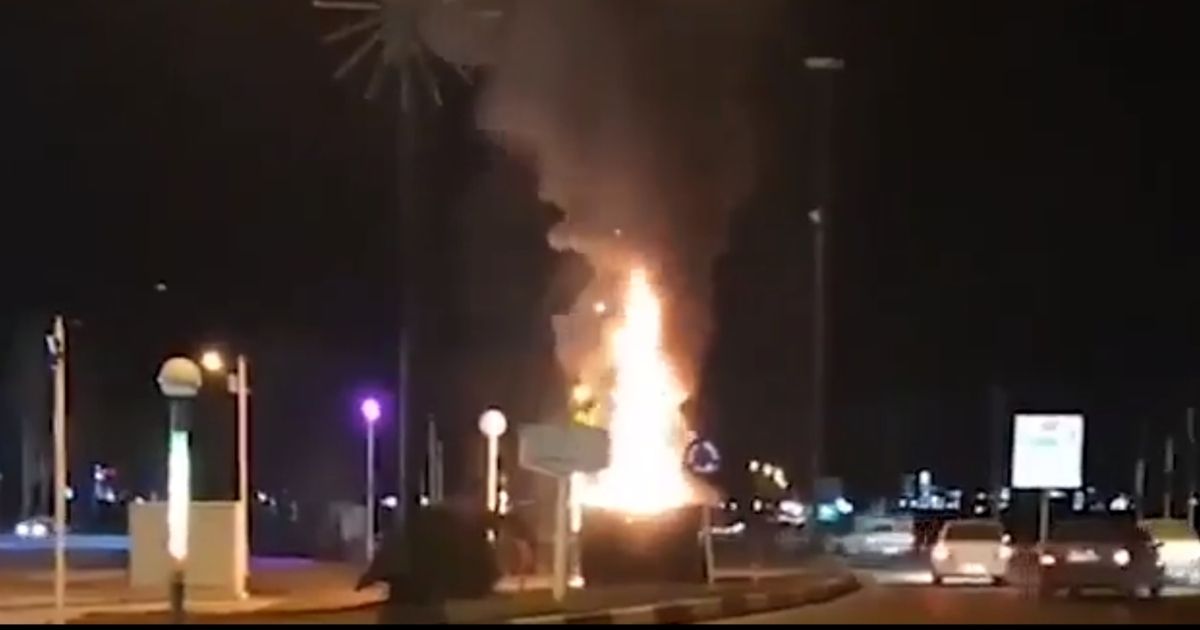 The following article, Statue to Slain Butcher Soleimani Raised; Hours Later, Defiant Iranians Give It a Fiery Sendoff, was first published on Flag And Cross.

Since his assassination two years ago, on Jan. 3, 2020, Iranian authorities have unveiled several sculptures and portraits of Soleimani throughout the country, the Jerusalem Post reported.

But the Iranian people do not seem to appreciate the honoring of Soleimani’s memory. The statue burned on Wednesday night was the second one of Soleimani that has been destroyed.

In August of last year, a different statue of the former commander was destroyed in Yasuj in southwestern Iran.

The destruction of the statue was immediately condemned by authorities and Iranian media.

ISNA also reported the statement of senior Muslim cleric Mohammad Ali Nekounam, who said, “This treacherous crime was carried out in darkness, just like the other crime committed at night at Baghdad airport,” VOA News reported.

Nekounam was referring to the assassination of Soleimani two years ago. Under the Trump administration, a drone strike was carried out near the Baghdad airport that killed both Soleimani and his Iraqi lieutenant, as the New York Times reported at the time.

It’s easy to see why Americans would want Soleimani eliminated. He was the commander of the Quds forces, behind nearly every Iranian operation for the past 20 years, in bed with Hezbollah, and responsible (directly or indirectly) for the deaths of many Americans in the region as he worked with America’s adversaries in Iraq.

After his assassination, the Department of Defense said that Soleimani and the Quds forces had been responsible for “the deaths of hundreds of American and coalition service members and the wounding of thousands more,” as the Washington Post reported.

“General Suleimani was actively developing plans to attack American diplomats and service members in Iraq and throughout the region,” the Pentagon said in a statement, according to the New York Times.

But why would Iranians dislike Soleimani so much that they would be willing to torch his statues?

Soleimani was the head of the Quds Force and developed it into the elite military force that it is today. The Quds Force was founded as the special operation arm of the Islamic Revolutionary Guard Corps, which was formed to guard the revolution of 1979 and the authority of the Ayatollah. In Persian, the IRGC’s name literally means “Army of the Guardians of the Islamic Revolution,” Vox reported.

As guardians of the revolution, the IRGC is oppressive and wary of anything and anyone who might question the authority of the Ayatollah and the IRGC itself. So western influence and any ideas of democracy are a threat that the IRGC has to tamp down on. This has caused cultural warfare at every turn.

In light of the IRGC’s role in Iran, it’s not hard to see why some Iranians might be opposed to it and to any of its leaders, like Soleimani.

Even upon his death, Iranians’ reaction on social media was mixed. Some called him a hero, but to others, he was a poster boy for oppression and the cause of many deaths.

Some on social media called him a “criminal” and “terrorist,” as Radio Free Europe reported.

When Ayatollah Ali Khamenei then announced three days of national mourning for Soleimani, some Iranians pushed back.

“How many days of national mourning do we need for the deaths of the young people who were massacred in [November]?” one Twitter user, Shahin Najafi, tweeted.

Najafi was referring to a brutal government crackdown on protesters that took place in November 2019.

This is just one example of what goes on under the Iranian regime. It’s really no wonder that some Iranians would not take kindly to having Soleimani statues erected throughout the country. He is a sign of the IRGC, the military force responsible for the oppression of Iran.