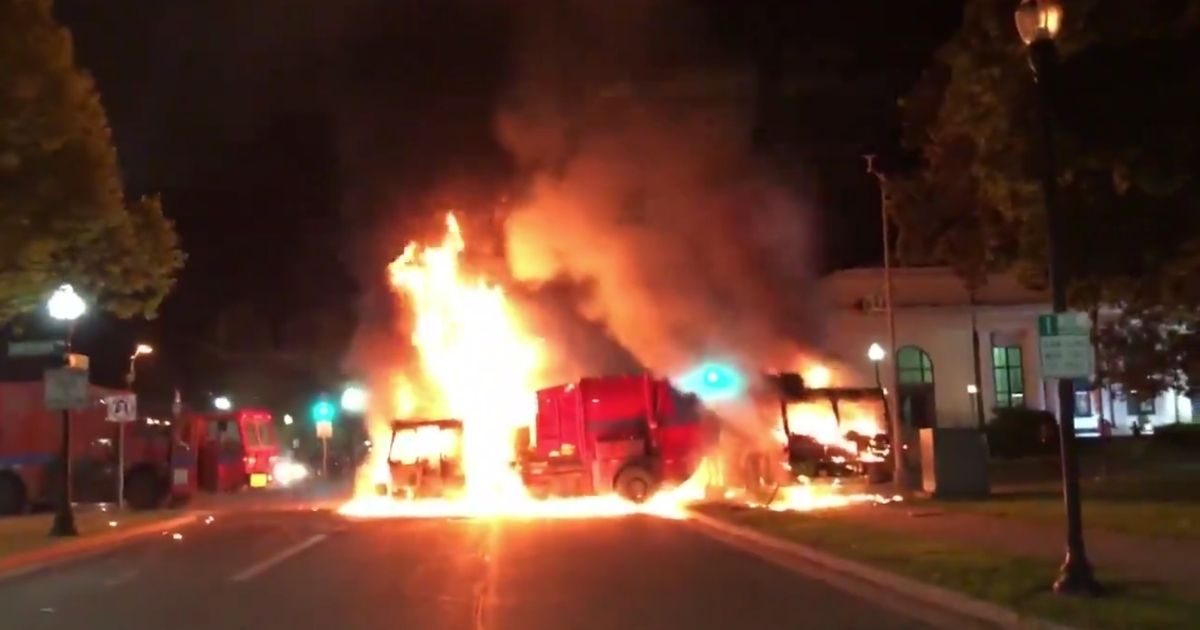 The following article, It’s OK When Dems Do It: Feds Dropped Charges Against Violent Rioters from Trump’s Inauguration, was first published on Flag And Cross.

We all know that Lady Justice wears a blindfold to signify her impartially.

The Justice Department appears to have taken off that blindfold in recent years.

The saga of Russiagate — when the DOJ decided to spy on then-candidate Donald Trump during the 2016 presidential campaign — is well-documented.

That beauty was followed by the Justice Department’s Russia probe after the Republican took office, which was led by special counsel Robert Mueller and staffed primarily by Democrats.

The DOJ spent the first two years of Trump’s presidency trying to delegitimize him and to lay the predicate to remove him from office.

More recently came the FBI’s roundup of hundreds of his supporters, some of whose only crime was being on the Capitol grounds during the Jan. 6, 2021, demonstration when a relative few who were present turned to violence.

If the roles had been reversed and Trump had been re-elected after election laws and procedures were changed, prompting Democrats to converge on D.C. to make their voices heard, one could imagine news outlets such as CNN characterizing it as a “mostly peaceful protest” and House Speaker Nancy Pelosi defending the vast majority who came to exercise their First Amendment rights.

And would the FBI be sending armored vehicles into neighborhoods around the country, with agents in full combat gear, smashing in doors and throwing flash-bang grenades to round up the Democratic “insurrectionists”?

Would the DOJ be prosecuting grandmas for “parading in the Capitol building” and going after others who have no criminal records with such fervor?

How do I know this?

One need only look at how the DOJ handled rioters during Trump’s inauguration in January 2017 and others since then to see it’s so.

ABC News reported on Trump’s Inauguration Day, “Violence flared on some streets of Washington, D.C., today amid Donald Trump’s inauguration — with people smashing car and store windows, clashing with police and even torching a limo, leading to more than 200 arrests.”

FLASHBACK: The liberals worrying about riots and mobs during Biden’s inauguration are forgetting what they did during Trump’s in 2017. pic.twitter.com/lprFN76ATz

“The #DisruptJ20 coalition, named after the date of the inauguration, which promised that its participants would attempt to shut down the inauguration events, tangled with Bikers for Trump, a group clad in leather biker gear that backs the president,” the news outlet added.

If this had happened during Barack Obama’s or Joe Biden’s inauguration, Pelosi and company would no doubt label it an attempt to undermine our democracy.

But since the riots were directed at Trump, it was no big deal.

NBC News reported in July 2018 that the Justice Department dropped all remaining charges against those who engaged in violence during the 2017 inauguration. They didn’t even have to do community service.

You might say that Jan. 6 was different because the demonstrators gained access to the Capitol and potentially put lawmakers’ lives at risk.

Well, let’s look back at the night of May 29, 2020, following the death of George Floyd in Minneapolis police custody, when rioters broke through the outer security barriers at the White House.

The location was better defended than the Capitol grounds so no breach ultimately occurred; however, many Secret Service agents were injured and property was vandalized.

Coronavirus, Riots, White House Siege: unfolding simultaneously in the US… And Trump is hiding from protest in underground bunker. pic.twitter.com/8exN1A0CKT

The Secret Service said in a May 31 statement, “Some demonstrators repeatedly attempted to knock over security barriers, and vandalized six Secret Service vehicles. Between Friday night and Sunday morning, more than 60 Secret Service Uniformed Division Officers and Special Agents sustained multiple injuries from projectiles such as bricks, rocks, bottles, fireworks and other items.

“Secret Service personnel were also directly physically assaulted as they were kicked, punched, and exposed to bodily fluids. A total of 11 injured employees were transported to a local hospital and treated for non-life threatening injuries.”

Flashback May 2020: At night, the far-left rioters surrounded the White House and tried tearing apart the protective barrier so they could storm the building. Secret Service and law enforcement were injured by the violent extremists. #CapitolRiot pic.twitter.com/pvxs5pPJzM

Where was the DOJ roundup of these criminals?

USA Today reported that the Washington police arrested 17 people, most of whom were charged with rioting.

Overall, D.C. police said 106 people were arrested in protests around the district that weekend, according to The Washington Post.

But that’s not the end of the story.

The news outlet said that although “many of those arrested were charged by police with felony rioting, that charge was dropped by prosecutors in most cases.”

Those prosecutors happened to be U.S. attorneys with the DOJ. There they go again.

Then there’s the case of the left-wing demonstrations in Portland, Oregon.

Sen. Ron Johnson of Wisconsin and some fellow Republican lawmakers sent a letter to Attorney General Merrick Garland in June 2021 questioning why the DOJ was treating the Capitol rioters so differently from those in Portland and other places.

“Property destruction stemming from the 2020 social justice protests throughout the country will reportedly result in at least $1 billion to $2 billion in paid insurance claims,” they wrote.

In it, the news outlet reported that “prosecutors have approved deals in at least half a dozen federal felony cases arising from clashes between protesters and law enforcement in Oregon last summer. The arrangements — known as deferred resolution agreements — will leave the defendants with a clean criminal record if they stay out of trouble for a period of time and complete a modest amount of community service, according to defense attorneys and court records.”

So the DOJ has its finger on the scales of justice against conservatives.

If leftist rioters received leniency — and they did — then Trump supporters should too.