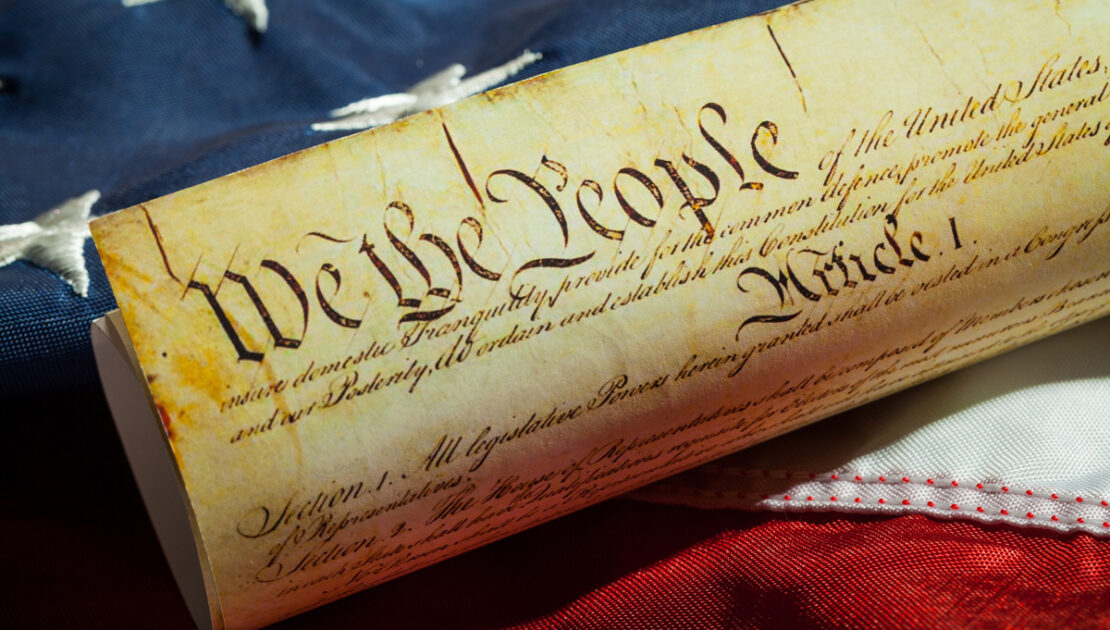 The following article, Getting Nervous? Dems Explore Using Obscure Section of Constitution to Ban Trump from Office, was first published on Flag And Cross.

Look out, America: Every liberal who’s earned a constitutional law degree from Twitter University in the past few years is about to use their newfound knowledge of our founding document to disqualify a lot of Republicans from office — including former President Donald Trump.

Unfortunately, however, it’s not just the armchair legal savants. Several reports that appeared on Thursday — the one-year anniversary of the Jan. 6, 2021, Capitol riot — indicated some Democrats are exploring ways to keep Trump off the ballot in 2024 by appealing to an obscure Civil War-era provision of the 14th Amendment.

It’s something we’ve heard floated before — and we’ve been covering these rumblings for some time here at The Western Journal. Now that the left seems more serious than ever about weaponizing a poisoned interpretation of the Constitution against the GOP before the 2022 midterms, we need all the help we can get in fighting them. You can help us in our fight by subscribing.

According to The Hill, which first broke the story, roughly a dozen Democrat legislators have spoken, either publicly or privately, about invoking Section 3 of the 14th Amendment to disqualify the former president from running again.

That provision, meant to apply to former Confederate officials who had previously taken an oath to the United States and subsequently “engaged in insurrection or rebellion against the same, or given aid or comfort to the enemies thereof,” forbids those individuals from holding “any office, civil or military, under the United States, or under any State.”

The prohibition could be lifted by a vote of two-thirds of each house of Congress.

In the immediate aftermath of the Jan. 6 riot, some Democrats had floated using Section 3 against wide swaths of Republicans, including some suggestions that any GOP legislator who voted against certifying the results might fall under the aegis of a provision clearly meant for former Confederates or others in the future who would similarly engage in active insurrection or rebellion against the United States.

However, the left — ever the proponents of the theory of the living Constitution — seem enamored of the idea that “insurrection” or “rebellion” could involve, say, challenging electoral results.

“If anything, the idea has waxed and waned,” liberal Harvard Law School constitutional expert Laurence Tribe told The Hill. “I hear it being raised with considerable frequency these days both by media commentators and by members of Congress and their staffs, some of whom have sought my advice on how to implement Section 3.”

Raskin, after Trump’s acquittal by the Senate last February, said the former president was “right in the bullseye middle of that group” covered by Section 3, telling ABC News “he really does fulfill exactly the constitutional prohibition there.”

“The point is that the constitutional purpose is clear, to keep people exactly like Donald Trump and other traitors to the union from holding public office.”

“Presumably, it could be done both affirmatively and defensively,” he continued. “People — you know if he tried to run for office again — people could try to stop him in the states. It also conceivably could be an affirmative statement by state legislators, by Congress, by other institutions.

“So we’d have to figure it out and do some more research about all of that, but the point is that the constitutional purpose is clear, to keep people exactly like Donald Trump and other traitors to the union from holding public office.”

Raskin didn’t comment when contacted by The Hill, nor did Nadler. As for Wasserman Schultz, she said, “I continue to explore all legal paths to ensure that the people who tried to subvert our democracy are not in charge of it.”

While this question seemed merely academic last year — more of a hypothetical outlet for liberal rage whereby figures of loathing like Sens. Ted Cruz of Texas and Josh Hawley of Missouri could be tarred, feathered and sent back to their respective states, never able to hold so much as a dog catcher’s office again — events of late seem to indicate this isn’t just a parlor game anymore.

In October, a Rolling Stone piece which claimed — via two anonymous sources — that Republican members of Congress or their staffs had coordinated with Jan. 6 rally organizers drew calls from Democrats to have them expelled for insurrection. The piece didn’t claim they had anything to do with the riot, mind you, and all of the organizing was lawful, but that didn’t stop anybody:

Every member of Congress takes an oath to defend our Constitution against all enemies, foreign and domestic. Any member who helped plan or was complicit in the Jan. 6 insurrection violated that oath, and should be immediately removed from office. https://t.co/gl80J5JaPP

This Rolling Stone article about January 6 is highly disturbing. No one should be above the law, including Members of Congress and former White House Staff.

And if pardons were indeed discussed in advance, why would that be? Because folks knew crimes were about to be committed. https://t.co/3parDHebmL

Every member of Congress takes an oath to defend our Constitution against all enemies, foreign and domestic. Any member who helped plan or was complicit in the Jan. 6 insurrection violated that oath, and should be immediately removed from office. https://t.co/gl80J5JaPP

Meanwhile, Marc Elias — the Democrats’ top election lawyer and the man who, among other things, helped finance the Steele dossier — has talked about disqualifying House members through Section 3, possibly even via litigation.

My prediction for 2022: Before the midterm election, we will have a serious discussion about whether individual Republican House Members are disqualified by Section 3 of the 14th Amendment from serving in Congress.

We may even see litigation. pic.twitter.com/pF7P2fw0kn

And then there was the anniversary of Jan. 6, which gave rise to no shortage of think-pieces about Section 3. Most of them had to deal with the legislature — “To Avert Another January 6, Expel Coup Plotters From Congress,” John Nichols wrote at The Nation — but Trump might be an easier target if the left really wants a Section 3 test run.

The question, of course, is how it would work.

“Some scholars believe that Congress, by a simple majority in both chambers, could act on its own to find Trump engaged in insurrection, which would implicate the constitutional provision. Under the 14th Amendment, restoring Trump’s eligibility would then require a supermajority vote,” The Hill reported.

“Other experts, like Tribe of Harvard, say Congress would need to go further, either by establishing a neutral fact-finding body to determine whether Trump engaged in insurrection under Section 3, or assigning that fact-finding role to a federal court.”

On that front, Tennessee Democrat Rep. Steve Cohen introduced a bill last year that would allow the attorney general to put the case before a three-judge panel that could disqualify Trump from holding further office.

Another left-wing pressure group, Free Speech For People, doesn’t believe Section 3 requires any action by the federal government at all. They’ve sent letters to all 50 states warning them that Trump is ineligible to appear on future ballots because he’s in violation of Constitution: “Just as states are permitted (if not required) to exclude from the presidential ballot a candidate who is not a natural born citizen, who is underage, or who has previously been elected twice as president, so too states should exclude from the ballot a candidate, such as Mr. Trump, who previously swore to support the Constitution, but then engaged in insurrection,” their letter read.

The group’s president said they were willing to take the case to court.

The first is that the man who was certified as the winner of the Electoral College in the early hours of Jan. 7, 2021, has had a particularly bad year.

Joseph Robinette Biden continues to divide America, having made almost no serious entreaties to conservatives and independents. His management of the coronavirus pandemic has proved he would have done no better — and likely quite a bit worse — at the beginning of the crisis than Donald Trump did. The debt has ballooned, inflation has skyrocketed, the economy has underperformed and the supply chain is a shambles. We left Afghanistan in shame — and, partially as a consequence of that, Russia is preparing to carve up Ukraine and China is eyeing an invasion of Taiwan. Beyond that, our nominal president is visibly enfeebled beyond the point where he could even be expected to function as a puppet and his political heirs are no more popular or competent than he is.

Second, not only does this vindicate much of Trump’s management of the crisis during his final year in office, it makes him the prohibitive favorite in 2024. If he decides to run, it would be a difficult climb for any Republican to best him in a primary challenge. The events of Jan. 6 and what preceded it do provide some baggage to Trump, yes — but if four years of Joe Biden look like the first year, that’s not baggage that can’t be overcome.

Make no mistake: The Democrats are nervous. That’s why an obscure portion of the Constitution meant to deal with former Confederate officials is likely to be repurposed so that “insurrection” now amounts to challenging electoral results via lawful means. We’ll see how far that goes.

The desperation of the Demosocialists is almost palpable.