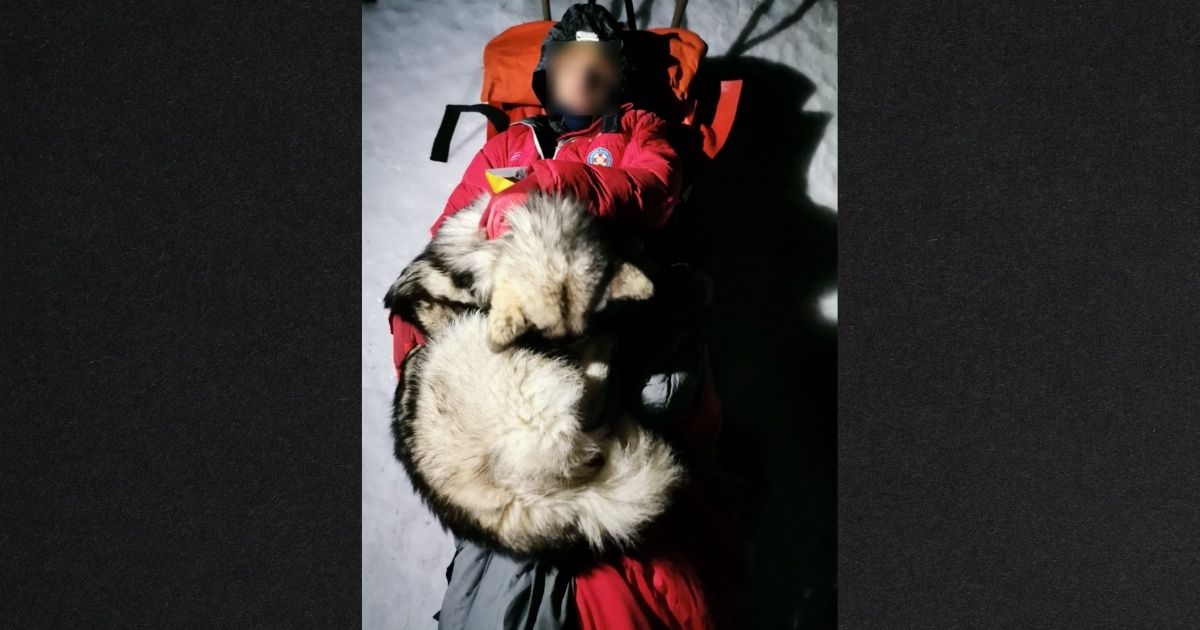 Many people like to think of their dogs as man’s best friend, but North, an eight-month-old Alaskan malamute from Croatia, has proven that he is.

North was hiking with a group of three over the weekend in the Velebit mountain range, which is along the Adriatic coastline.

While many dogs would be miserable in the cold and snow, Alaskan malamutes thrive in those conditions. They are often confused with Siberian huskies, but are larger dogs with thicker coats.

“Everything about Mals suggests their origin as an arctic sled dog: The heavy bone, deep chest, powerful shoulders, and dense, weatherproof coat all scream, ‘I work hard for a living!'” the page for the breed on the American Kennel Club’s website states.

“But their almond-shaped brown eyes have an affectionate sparkle, suggesting Mals enjoy snuggling with their humans when the workday is done.”

It was North’s snuggling that saved one of the hikers. When Grga Brkic took a tumble and was unable to get up again, the other two hikers couldn’t reach him, so they worked to get help.

North did what he could do, too: He made his way over to Brkic, curled up on him and stayed with him for the 13 hours it took for help to arrive.

“The minutes and seconds before they arrived were so slow,” Brkic told the Croatian media, according to The Guardian.

Around 30 rescuers showed up to assist Brkic, making the journey to the 5,900-foot elevation where the injured hiker was stranded.

The mountain rescue group that got Brkic back to safety, called Hrvatska Gorska Služba Spašavanja, posted about the incident on Facebook and included a photo of the furry hero.

“Friendship and love between man and dog know no boundaries,” the HGSS posted. “A series of unfortunate circumstances they climbed together down the slope yesterday afternoon.

“Together in happy and difficult moments, that’s life. North passed without injuries, but his friend, a young mountaineer, was not so lucky. He curled up with him and warmed him with his body.

“His loyalty did not stop even from the arrival of the savior, he was one of us guarding his man for 13 hours. From this example we can all learn about caring for each other.”

Even though Brkic was not North’s owner, the dog could clearly sense that he needed help.

“This little dog is a real miracle,” the dog’s owner told the Jutarnji List daily paper, according to The Guardian.

In a comment on the HGSS post, Antonija Sjauš Brkić wrote that both man and dog were doing well and resting at home.

“North is home and says hi to everyone,” she wrote. “Grga is going to be fine. HGSS.. we just don’t have words… Thank you!!”