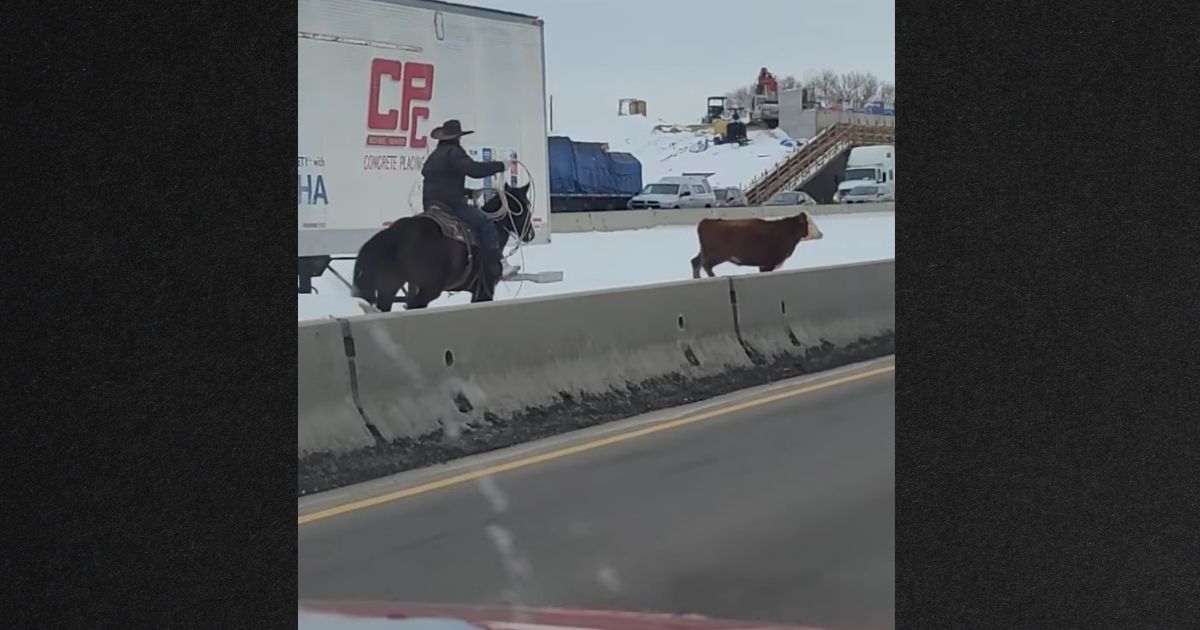 The following article, Watch: Cows Escape Pen, Get Rounded Up on Highway After Another Attempted Escape, was first published on Flag And Cross.

Drivers on Interstate 84 in Caldwell, Idaho, experienced a different kind of rush hour on Sunday when some cows escaped from their property and ran across lanes of traffic.

It was around 1 p.m. when Caldwell police started getting calls about the moving road hazards located between Exit 29 and Exit 32. Idaho State Police responded and posted about the incident afterward.

“Trooper Weinstein and Sgt. Farley responded and found two cows in the median in a construction area,” they shared. “One smarter cow had already jumped the barrier and gotten herself safely off the interstate. All three had reportedly gotten loose from a nearby pen.

“With help from the cows owner, the Troopers used their best wrangling skills and at one point positioned their patrol cars to try and direct the cows back into the owner’s trailer.

“Not long after, a couple of very handy people on horseback showed up. They were friends of the fellow who owns the cows.”

It was at about that time that local Amanda Chapman and her husband were passing the scene. Being a passenger in the car, Chapman was free to record the crazy scene.

“We’ve got some cowboys, and an angry cow taking off on the freeway,” Chapman says in the video that she posted to Facebook.

They watched as the cow evaded cowboys, cops and cattlemen to race back onto the freeway and pass right by Chapman, running against traffic.

“When we were attempting to get the cow into the trailer, she changed her mind and decided that she was going to take another trip down the interstate,” ISP Sergeant Steve Farley told KTVB. “So the two individuals on horseback were able to follow her and eventually able to get her roped and secured so we could keep her off of the interstate.

The ISP said that it took several hours to corral the uncooperative cattle, but at the end of the day they were retrieved without harm to drivers or the animals themselves.

They also thanked Amanda for filming as a passenger, and wrote a word of warning to all the other rubber-neckers on the road that day who were not passengers.

WARNING: The following video clip contains language that some may find offensive.

“The happy ending almost didn’t happen,” they wrote. “Many passing motorists stayed focused and alert as the cowboys and Troopers did their best to wrangle the wayward cattle. However other drivers took their eyes off the roadway and hands off the wheel to capture photos or video. Several even stopped in the middle of the interstate with cameras out and collisions were only avoided thanks to those drivers who stayed focused. To those alert drivers — thank you.

“Yes, this was an unusual sight. But drivers, if you do not have a passenger who can take photos, do your part and take responsibility for keeping yourself and others safe. Even when something is weird or cool, do not drive and use your phone. Don’t be ‘that guy’ who turned an otherwise happy ending into a tragedy for man or beast.

“The unique blend of urban and rural, western heritage meets hi-tech, is one reason the men and women of the Idaho State Police are proud to live and serve in this great state. One of Idaho’s greatest western values is helping keep our neighbors — and even our neighbor’s cattle — safe. Let’s work together to make sure that value stays strong.”

Continue reading: Watch: Cows Escape Pen, Get Rounded Up on Highway After Another Attempted Escape ...