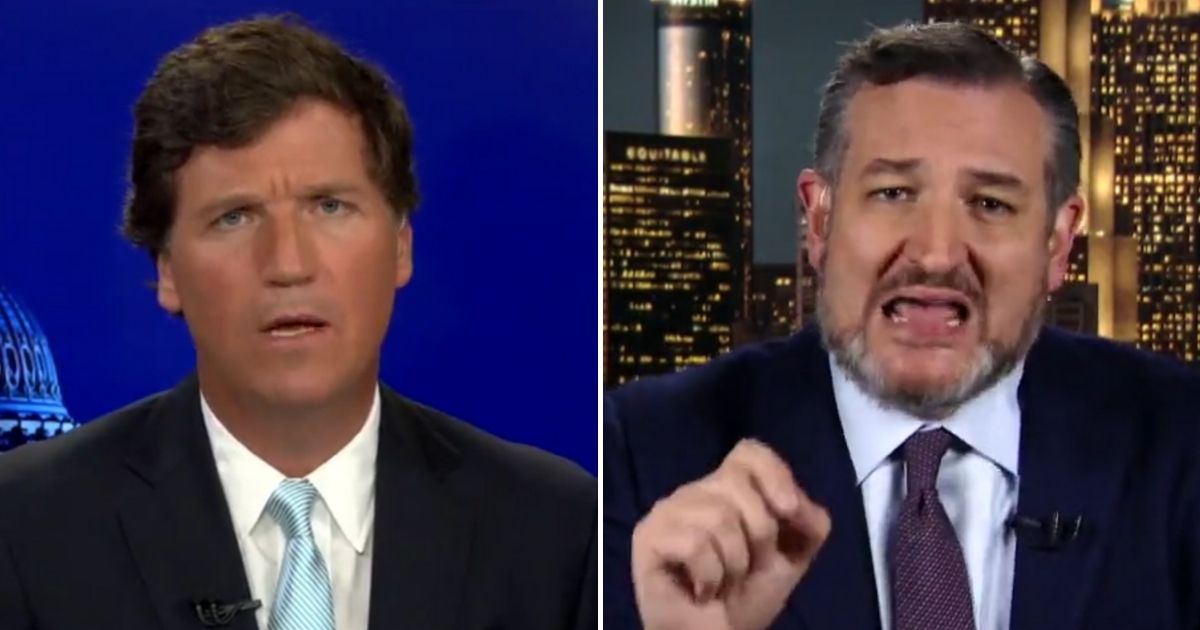 During a Wednesday Senate heating, Cruz had called the events of last Jan. 6 a “violent terrorist attack on the Capitol where we saw the men and women of law enforcement … risk their lives to defend the men and women who serve in this Capitol,” according to the Texas Tribune.

Carlson criticized Cruz for the comment that night, prompting Cruz to appear on Carlson’s show Thursday night to respond.

“There are a lot of dumb people in Congress. You are not one of them. Smarter than I am. And you never use words carelessly,” Carlson said after the routine pleasantries were concluded. “And yet you called this a terror attack when by no definition was it a terror attack. That’s a lie. You told that lie on purpose and I’m wondering why you did.”

Cruz began his response by saying, “The way I phrased things yesterday — it was sloppy and frankly, dumb.”

“I don’t buy that,” Carlson interjected as he brought Cruz to a halt. “Whoa, whoa, whoa, whoa! I’ve known you a long time, since before you went to the Senate. You were a Supreme Court contender. You take words as seriously as any man who’s ever served in the Senate. And every word; you repeated that phrase, I do not believe that you used that accidentally. I just don’t!”

“Tucker, as a result of my sloppy phrasing it’s caused a lot of people to misunderstand what I meant. Let me tell you what I meant to say,” Cruz said. “What I was referring to are the limited number of people who engaged in violent attacks against police officers. I think you and I both agree that if you assault a police officer, you should go to jail. That is who I was talking about.”

Cruz then tried to dig himself out of the hole his words had dug.

Carlson was not letting Cruz off the hook that easily.

“If somebody assaults a cop, he should be charged and go to jail, I couldn’t agree more. We have said that for years. But the person is still not a terrorist. How many people have been charged with terrorism on January 6th? Like, why did you use that word? You’re playing into the other side’s characterization,” he said.

“That being said, Tucker, I agree with you, it was a mistake to say that yesterday. And the reason is what you just said, which is we’ve now had a year of Democrats and the media twisting words and trying to say that all of us are terrorists, trying to say you’re a terrorist, I’m a terrorist.

“And so, look, I don’t like people who assault cops. And I stand up and defend cops. And the reason I used that word is that’s the word I’ve always used for people that violently attack cops,” Cruz said.

“But in this context, I get why people were angry, because we’ve had a year of the corrupt corporate media and Democrats claiming anyone who objected to the election fraud — and by the way, remember what was happening during those protests,” Cruz said before Carlson interrupted him. Cruz was among the senators objecting to the certification of election results, a process that was interrupted as rioters breached the Capitol.

After Carlson brought Cruz to a halt amid hand waving and shouting, he told the senator, “I guess I just don’t believe you. And I mean that with respect.”

Carlson said Cruz has “watched people use language to distort the events of that day intentionally. ‘Insurrection,’ ‘coup,’ ‘terrorism.’”

It was now Cruz’s turn to interrupt.

“I get it. Of course, it wasn’t an insurrection. Saying it’s an insurrection is a political term, it’s a lie. I’ve repeatedly denounced it.  And when it comes to … look, I was focusing on what I normally say. That — what you aired — was a little, 15-second snippet. What I normally say is, ‘violence is wrong, peaceful protest is right.’ If you engage in violence, you should be prosecuted. If you’re speaking, you have a right to speak,” Cruz said.

After a brief truce, Cruz finished making a point he sought to make earlier.

“But let me also make a quick point, Tucker: Remember, while thousands of people were standing up to defend this country on January 6th, at that exact moment, I was standing on the Senate floor, objecting to the election results, demanding that we impanel election commission to consider evidence of voter fraud, and I brought together 11 senators to join me in supporting getting to the bottom of that,” Cruz said.

“Yeah, but you’re not a terrorist, you know? You’re not. You’re a guy — you’re a guy who assaults a cop, OK? So, that — there’s a — there’s a legal difference, as you well know better than I do, since you were actually in the running for the Supreme Court, and there’s a moral difference,” he said.