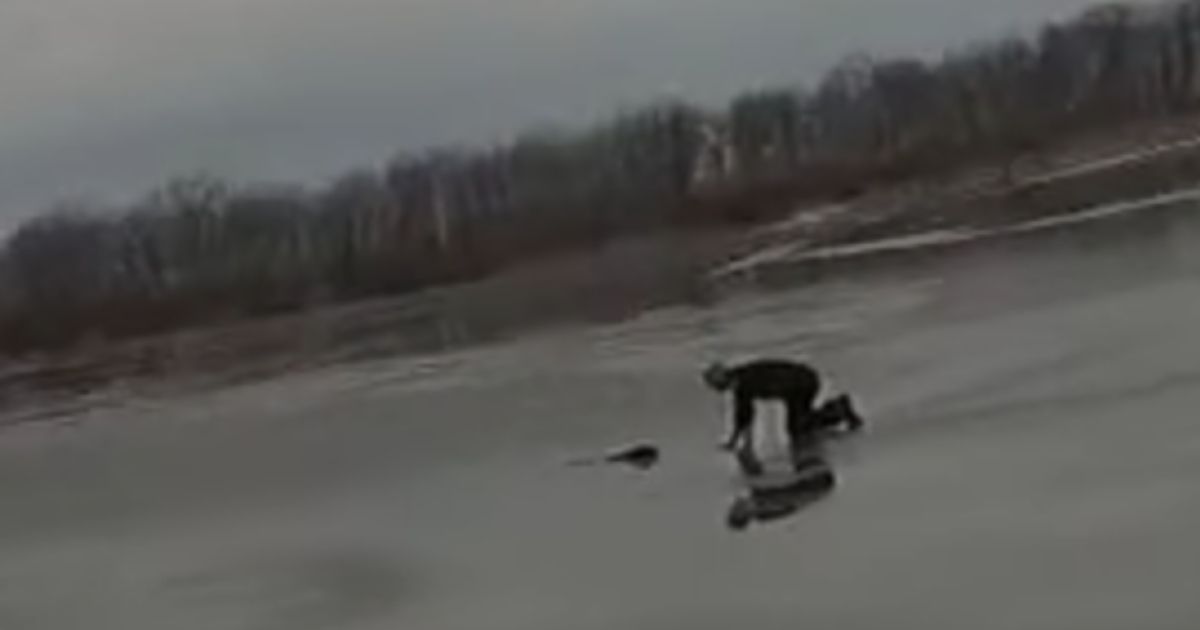 The following article, Police Officer Scrambles To Save Dog After Tragic Fall Through Thin Ice, was first published on Flag And Cross.

On Dec. 5, two friends and their dogs went out for a walk at Bond Lake Park in Lewiston, New York.

In a move that one owner now deeply regrets, the two let their dogs off-leash so they could explore the frozen park as they walked. Usually the two were good about sticking close, but on that day, a flock of geese landing on the water proved to be too much.

The younger dog, a 10-month-old Labrador retriever named Kona, tore out over the frozen lake after the birds and fell through the ice.

Unable to get back out on her own, she began to tire out. The owner later explained they’d had recent back surgery and didn’t trust the quality of the ice, so they called for help.

“I called 911 and asked for the local fire departments ice rescue team,” the owner later wrote to the Lewiston Police Department, according to a post they shared on Thursday.

“Kona was already in the water for 10-15 mins and very tired when 3 Officers from your department pulled up to the scene, one being Officer Jon Smith.”

While the other two officers steadily walked toward the dog’s location, Officer Smith took off running toward the struggling pup, slipping on a patch of ice along the way but quickly recovering.

The officer behind him caught the whole thing on his bodycam, and the recording has since been shared.

With no hesitation, Officer Smith stripped off some of his gear and stepped out onto the ice in the direction of the dog, which was about 50 yards from shore.

“Don’t go in there, bro!” someone can be heard saying in the background of the video.

But he did go in there — and by some miracle, he managed to reach the 75-pound dog, pull her back up onto the ice and return to solid ground without falling in himself.

“Well folks he’s done it again,” the Lewiston Police Department posted on Wednesday. “After just receiving a department award for pulling a woman from a burning house, this time it was a 4-legged friend.

“Officer Smith arrived at Bonds Lake after a dog had fallen through the ice and was trapped in the water about 50 yards from shore. Without hesitation he removed his equipment and went in after him, bringing him safely back to land and reuniting him with his owner.

This rescue comes just a few months after Smith was recognized for his rescue of an elderly woman who was inside a burning house.

Many expressed their surprise that the grown man didn’t break through the ice when the dog did. The owner of the dog wrote an email expressing deep gratitude for Smith’s actions and remorse for having had Kona off-leash.

“You should be proud to have Officer Jon Smith as a member of the Lewiston Police Department,” the letter concluded. “His professionalism and bravery should be applauded.

“I have witnessed countless acts of selfless heroism, Officer Jon Smith’s actions rank high in my book. Kona and I will visit the police station soon to thank Officer Smith once again for his outstanding service.”