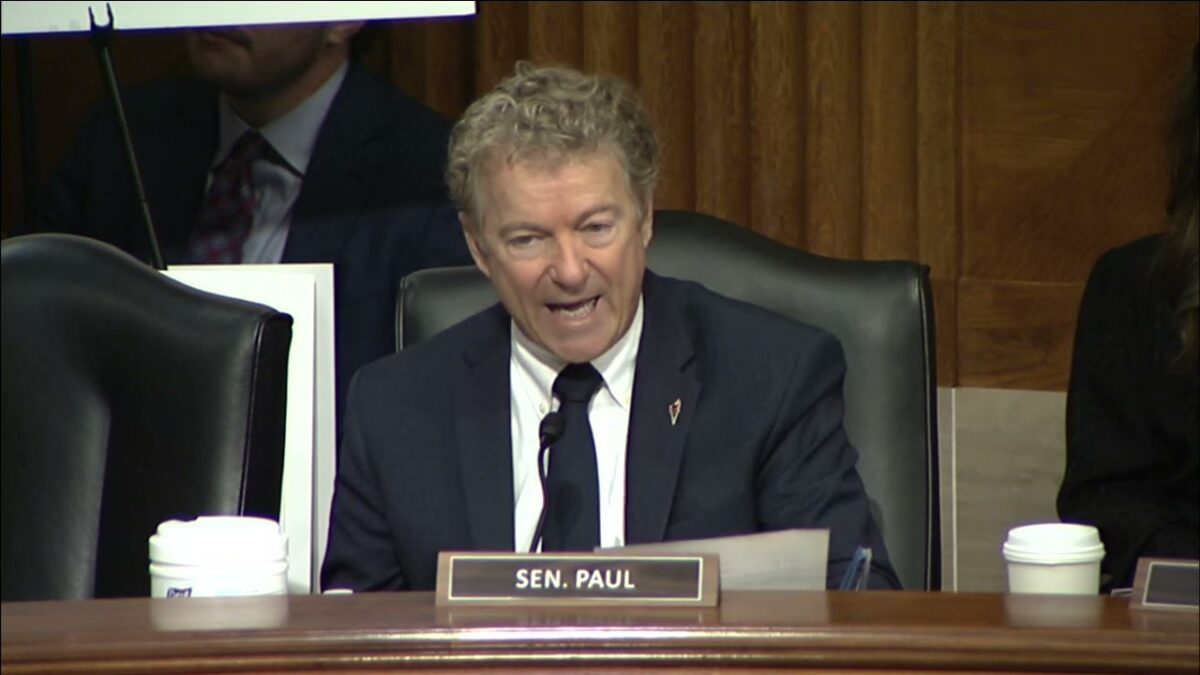 The following article, Fauci Nemesis Rand Paul Says Disgraced Doc Will Retire if GOP Takes Senate Back in 2022, was first published on Flag And Cross.

His name won’t be on any ballots, but Dr. Anthony Fauci will be a factor in the November midterm elections this year, according to Republican Sen. Rand Paul of Kentucky.

Fauci, the medical adviser to both former President Donald Trump and President Joe Biden, faces increased scrutiny from his nemesis, Paul, who has said he will investigate Fauci if Republicans win a majority in the Senate in the fall.

As a result, Paul expects Fauci to retire, according to an interview the congressman conducted with his father, former Texas Rep. Ron Paul, on the “Ron Paul Liberty Report.”

“If I win in 2022, I’ll be chairman of a committee in the Senate,” Rand Paul said. “We will use the subpoena power to bring forth all the records.”

Currently, Senate requests for records from the National Institute of Allergy and Infectious Diseases that Fauci directs result in redacted documents and incomplete information, according to Paul.

“We’ll get to the root of everything,” Paul said, describing what he would do if he and his party were to achieve a win in the midterms. Paul officially announced his bid for a third Senate term on Tuesday.

“I predict this: If Republicans take over the House and the Senate, Fauci will retire. And that would be the best thing for the country, because he’s been so damaging,” Paul said.

“Because it’s not just through force of law. All these blue state governors listen to him and think that it’s science to close a restaurant at 10 o’clock at night or to say we have to have 25 percent patrons.”

“There’s no evidence that any of the mitigation, any of the rules or mandates, change the trajectory of the virus at all,” Paul said.

Asked by his father how critical of an issue Fauci would be in the 2022 midterm elections, Rand Paul replied, “I think huge.”

Fauci, who has called himself a personification of science, has been at sharp odds with Paul, a physician in ophthalmology, since the pandemic’s start.

In November, Paul grilled Fauci in a Senate hearing regarding Fauci’s denials of his agency’s funding of gain-of-function research in Wuhan, China, where COVID originated.

And in his Dec. 27, 2021, interview with his father, Paul said Fauci has gone from being “untouchable Teflon” to a place where “at least half the country or more thinks he’s not always being honest, that he’s self-interested or conflicted in his interest.”

Both Pauls in the interview discussed natural immunity, protection from further susceptibility to COVID-19 in a person who has already had it.

Paul undercut Fauci’s credibility as he credited his intelligence when he was asked if Fauci believes in natural immunity.

“I think he secretly does, but I think he lets on or pretends as if he doesn’t,” Paul said. “In fact, I’ve referred to it as sort of a platonic lie — a noble lie.

“And he thinks, ‘Well, yeah, people are probably immune. They might not need it but we don’t want people to worry their pretty little heads about it. We’d rather just have everybody do the same thing because easier — uniformity and submission is easier — if everybody does the same thing.’”

“He’s not a complete idiot. I mean, he actually understands this,” Paul said.

“But he’s not a truthful or an honest person. But because he’s made this mistake of de-emphasizing natural immunity, I think thousands of people have lost their lives.”

Paul said in the early days of the pandemic, big-government Republicans joined in elevating Fauci, believing the leadership of a scientist was needed, given concern about then-President Trump staying ahead of the problem.

But Paul was critical of typical medical practices regarding COVID — which sometimes result in allowing people to suffer at home until they need to go to the hospital and are then put on a ventilator and die.

“I blame Dr. Fauci for that because he was never on TV saying, ‘If you get sick, there is a treatment.’ Because it’s everything about the vaccine and then, if you’re not vaccinated, you’re unclean.”

Meanwhile, public health representatives like Fauci and others continue to put out directives, sometimes day-by-day contradicting themselves.

At this point, the public is facing not only contradictions among scientists and doctors, but outright censorship.

Thankfully, there are people like Rand Paul who are not only medically qualified to debate public health officials like Fauci, but who are also qualified in the science where Fauci seems to excel: political science.