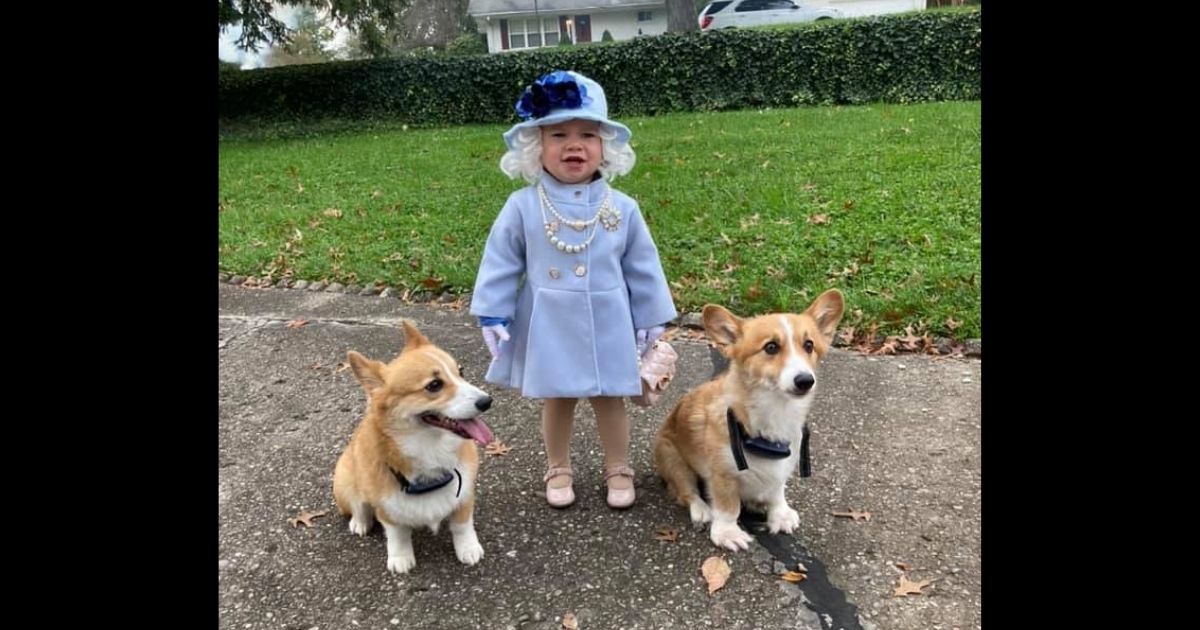 The following article, After Finding Out About Little Girl’s Dress-Up, Queen Elizabeth’s Team Doles Out Surprise, was first published on Flag And Cross.

The scramble to find a memorable Halloween costume is something many parents deal with every year.

Katelyn Sutherland from Ohio certainly made an impact with her daughter’s adorable outfit last Halloween, which has made headlines around the world for its cuteness and the heartwarming story that goes along with it.

Jalayne, 1, spent Halloween dressed as Queen Elizabeth II. She had a powder-blue jacket and hat, matching gloves, tights, pearls, brooch and clutch — and she even wore a short, curly white wig.

The cherry on top was a picture with the two family dogs, who just so happen to be corgis.

Sutherland shared the photos of both Jalayne and her brother, who dressed up as Superman, complete with a curl on his forehead.

“The biggest inspiration for the outfit was the fact that our dogs are our daughter’s best friends,” Sutherland told The Sun.

“We wanted to do something where they could all be included together. We are most definitely fans of the royal family and truly admire how the queen walks by faith.”

“While walking around on Halloween we received many, many compliments, but my favorite reactions were when people bowed to her or did the royal wave and said, ‘Your Majesty!'”

So many enjoyed the toddler’s getup that Sutherland decided to mail some photos to the queen herself — not expecting anything in return, but imagining it would be a nice way to reach out.

It was quite the surprise when a letter arrived in December from Windsor Castle.

The note, written by the queen’s lady-in-waiting Mary Morrison, was stamped with the Windsor Castle insignia.

“The Queen wishes me to write and thank you for your letter, and for the photograph you thoughtfully enclosed,” the letter read.

“Her Majesty thought it kind of you to write to her, and The Queen was pleased to see the photograph of your daughter, Jalayne, in her splendid outfit.

“Her Majesty hopes you all have a very Merry Christmas, and I am enclosing a little information about the Royal Pets, which Jalayne might like to have.”

It will certainly be difficult for Sutherland to top this outfit!

She has got the be the cutest for Halloween, but really anytime.