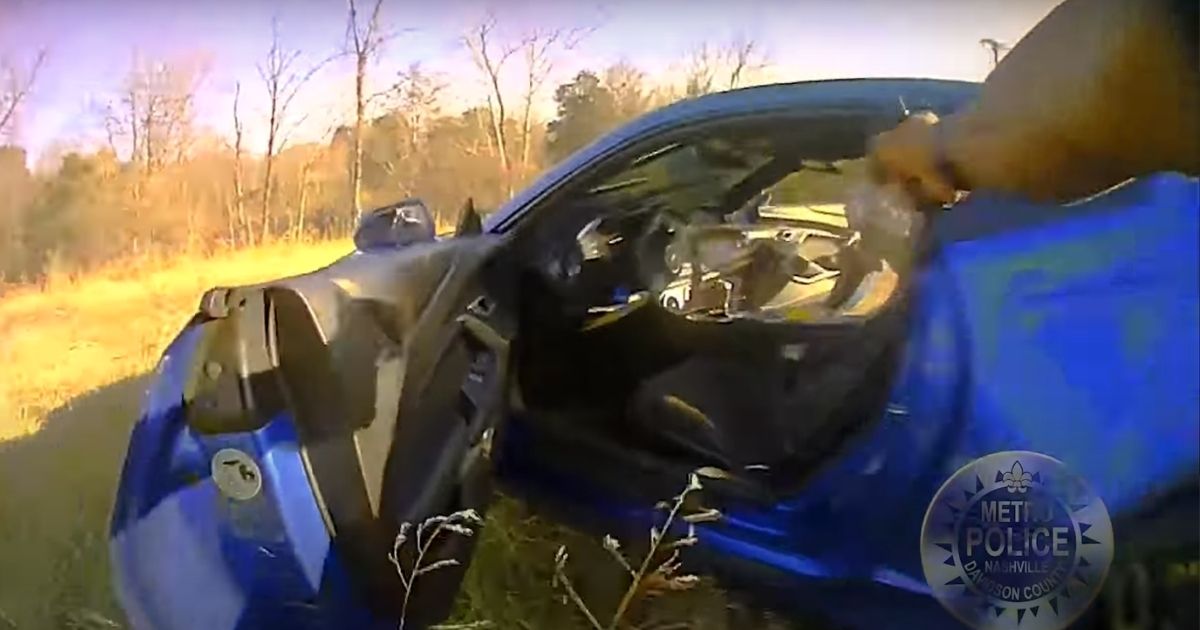 The following article, Watch: Man Seemingly Ignores Cop’s Advice to Not Go for His Gun, Get a Bullet in the Leg for the Idiotic Move, was first published on Flag And Cross.

A man involved in a car accident recently learned the hard way that if a police officer tells you not to pick up a weapon, you should probably just heed his advice.

Earlier this month, Officer Byron Boelter of the Metro Nashville Police Department stopped at the scene of a wreck on his way home from work as a school resource officer at a local high school, as Tennessean reported.

In body camera footage released by the department, you can see him exit his vehicle and approach the critical scene, as EMTs pull the unconscious body of a young woman out of one of the wrecked vehicles and her mother cries in distress in the background.

Boelter’s presence at the scene, however, seemed to have made the 20-year-old driver of the other car, who appeared to have caused the accident, a bit nervous.

In the footage, you can see the officer approach the vehicle and he can be heard calmly but firmly advising the young man, “Just leave that stuff in there, man.”

“Just go ahead and go. Go. Go on ahead and go, man,” he continues, but the young man appears to ignore him and reaches inside, where Boelter says there was a handgun on the dashboard.

Then, in a flash, the officer fires and the young man collapses, having been shot in the leg.

Boelter, with a clearly excited tone now but still with tremendous control, tells the man to stay down and keep his hands up. He radios for backup and slowly approaches the man, who is crying in pain.

“Over there somewhere. I don’t know, sir,” the young man replies.

“Why’d you reach for it, kid?” the officer asks.

“I was trying to get it out of the car, sir,” he replies.

According to Tennessean, the 20-year-old was taken to the hospital where he was stabilized and was later booked into jail on a federal felony charge that police say was unrelated to the shooting.

Boelter has been placed on an administrative assignment as the incident is being investigated and the Metro Nashville Community Oversight said that it was able to examine the scene and body camera footage.

Security footage from a business near the scene of the wreck captured the young man driving erratically when he ran into the vehicle with the girl and her mother.

It is not difficult to imagine that, when Boelter pulled up to the scene of the wreck, the man panicked and tried to retrieve what could have perhaps been a weapon he wasn’t supposed to have from the vehicle — and he is very lucky it didn’t cost him his life.

The officer did not know if this young man was simply foolish, or self-destructively reckless, and had to react in a fraction of a second to neutralize a potential threat.

Officers need to be on their guard at all times. After all, you never know when what seems like a routine response to a car wreck could turn sinister — in 2017, a Southport, Indiana, police officer was shot and killed at the scene of a crash by one of the victims he’d stopped to help.

People do crazy, panicked things when confronted with law enforcement sometimes, and their own terrible decisions can cost our vital public servants their lives.

The concept of the Thin Blue Line has been crudely politicized in recent years as it has become sickeningly en woke vogue to demonize police officers and other members of law enforcement.

This is a crying shame, as it is critical for any civil society to respect the invisible barrier that separates those sworn to protect and serve from the rest of us.

Police brutality, negligence and abuses of power are very serious issues, and should be confronted and dealt with.

However, America happens to have some of the most well-trained, least corrupt and most scrutinized collection of police forces in the world, so we can’t lose sight of just how far we have come in this area as a nation and a society.

Police departments in our sovereign republic protect our rights and enforce the laws of a self-governed people, and so it is imperative that we respect the job they do and that citizens understand to obey their orders in dangerous situations.

That’s what they’re there for and what our tax dollars go to support — sworn officers of the peace who we delegate with authority to enforce the law and keep the peace, using lethal force if necessary, which, unfortunately, it sometimes does become.

Thus, members of law enforcement have a primary interest in preserving their own lives as well as those of members of the public.

I certainly hope this young man will think twice before taking such reckless actions again, as well as those that may have led up to this incredibly risky and foolish moment — and that the rest of us can be more appreciative of the job that police officers sign up to do.

Continue reading: Watch: Man Seemingly Ignores Cop’s Advice to Not Go for His Gun, Get a Bullet in the Leg for the Idiotic Move ...